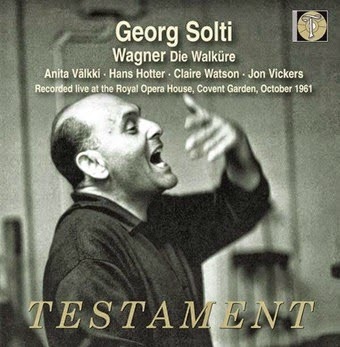 Solti’s first Walküre. Given the iconic status of his Vienna Ring cycle, the first release of this contemporaneous recording from Covent Garden is guaranteed to generate interest. Recorded in 1961, it dates from the very start of Solti’s tenure at the Royal Opera and between the first and second installments of the Decca Ring (between Rheingold, 58, and Siegfried, 62; Walküre was recorded last, in 65). There is much to commend it, even if the proliferation of superior live Ring cycle recordings from the era, particularly from Bayreuth in the 1950s, rules out superlatives on all counts. Even so, it’s a strong performance, well conceived and well sung.
The excellent liner notes, from Tony Locantro, tell of the context, of the Royal Opera’s resurrection in the years following the war, and of the flagship Wagner projects with which the company demonstrated its return to the international opera scene. A new production of the Ring premiered in 1954 under Fritz Stiedry, with later performances conducted by Rudolf Kempe and Franz Konwitschny. It was quite an act to follow by all accounts, but when Solti took over in 1961 that was exactly his plan, with a new production of the cycle and, more significantly, a new conception of the music. And other changes were afoot. Through the 1950s, Royal Opera’s policy had been to present works in English with principals taken from the company, but from the early 60s, there was a reversion to original languages, allowing the company, as here, to book international names for the lead roles.
Comparisons with Solti’s 1965 Vienna version are unfair and largely irrelevant. Only Solti himself and Hans Hotter appear in both. This is a recording of a live staging, unlike Decca’s studio version. It’s in broadcast quality mono, against Decca’s state-of-the-art stereo. And, good as the performers are, they’re no match for the company assembled by John Culshaw. In terms of the aural experience, the biggest difference comes not from the audio quality but from the orchestra. The Orchestra of the Royal Opera House gives a punchy, dynamic reading, but lacks the tonal luster of the Vienna Philharmonic, especially in the strings.
That said, Solti’s reading is essentially the same. His trademark drive and energy are everywhere apparent, though his maniacal temperament seems less overbearing. There is poetry and elegance, but even in the quieter and slower passages, the direction and focus of the music are never forgotten. He also deserves credit for the sheer unity of this performance, for the fact that everybody is clearly working towards a common musical purpose, and one they all seem to believe in, however much they may, or may not, have been harassed into it by the “screaming skull.”
No weak links in the cast, but one or two particularly impressive performances. Jon Vickers, as Siegmund, is captured near the start of his Wagnerian career, he made his Bayreuth debut two years earlier in the same role. His performance here is noble and heroic, but agile and nuanced too. Claire Watson is less imposing as Sieglinde, but makes up for it in the dark richness of her tone, which comes across as an alto-like elegance in the lower register. Anita Välkki has an attractive purity of tone as Brünnhilde, accurate, if unsophisticated singing, characterized by big, round vowel sounds. Hans Hotter produced this staging as well as singing Wotan. The visuals failed to impress the critics, so it is just as well that his vocal performance was up to scratch. There is plenty of authority in his singing, and plenty of drama. Other recordings capture better Wotans from him though, particularly Solti’s Vienna version, where his tone has more focus and seems more controlled. Rita Gorr sounds quite abrasive as Fricka, certainly a dramatic performance but not a pretty one: You never forget she’s angry. The Royal Opera’s previous policy of engaging company singers for lead roles is only maintained here in the case of Michael Langdon, whose Hunding is as dependable as it is deep. And the company really excels in the valkyries it fields, some of whom went on to bigger things: Marie Collier, Margreta Elkins, Josephine Veasey.
The recording was made for broadcast by the BBC and, given its age, is very good. There is no noise at all, and only a few minor pitch fluctuations in the second act. Digital remastering is credited to Paul Baily at Re:Sound, but no details are given of what exactly he has done. Given the flatness of the tone, his noise removal seems to have been quite ruthless on the upper partials. The biggest problem with the source recording is the distance of the singers, and many of the players too, from the mikes.
Given the recent backlash against Solti’s Vienna Ring cycle, many may feel that another Walküre from him adds insult to injury. Yet, despite the cover design, which features an image of him at the podium open-mouthed—very possibly screaming—and places his name above that of the composer in a much larger font, this recording isn’t really about Solti. He certainly gives the performance drive and focus, but it is a less distinctive interpretation than the one he set down in Vienna. Instead, it is the strong cast that makes this reissue worthwhile, some of the biggest names of the day, working together as a real ensemble.