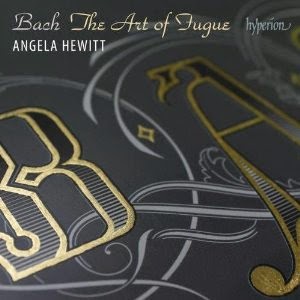 
The end of a long journey, but hardly a valedictory summation. Angela Hewitt has been recording Bach’s solo keyboard works for a long time, and an advert in the liner here tells us that a 15-CD set is now available covering pretty much the rest of it. She’s not the only pianist to leave The Art of Fugue until the end, and like so many of her predecessors, she is able to bring a wealth of experience to its many interpretive challenges. The results are impressive, and very much within the idiom she has established: lyrical, flowing and elegant, but propulsive too, and always keenly focussed.
As ever, Hewitt performs on a Fazioli piano. It is the perfect instrument for her touch, accentuating her precision and grace, and offering warmth, but never bombast or excessive weight. For all the elegance of her approach, there is often a stark simplicity to her tone production and phrasing. Compared, for example, to Sokolov or Feltsman, everything seems very up-front: phrases are shaped with dynamics, but there is never any sense that the music is coming from, or receding to, some nebulous or opaque background. Even at the quietest dynamics, she favours directness. In fact, Hewitt is more often looking at the bigger picture, with the shaping of movements more explicit than of phrases. She will often build up to thundering dynamics for a climax, all the time retaining her even tone and clarity of voice leading. But even more impressive is the patience with which these climaxes are prepared, often so gradual as to be barely perceived until the later stages. It’s certainly a Romantic approach, but achieved with such discipline and authority that it is likely to win over many with more ascetic tastes.
The character of each movement is securely established by the rhythm, tempo and articulation of each opening statement. The balance between contrast and continuity is weighed more toward the latter, but even so, a distinctive atmosphere and temperature is chosen for each movement, however subtle the differences. There is also a feeling of progression through the work as a whole, with some movements taking on a transitional character for the sake of their neighbours. One surprise early on is the climax to the Second Contrapunctus, which seems to overwhelm everything we have heard so far, as if the First was leading up to this. Such nuances of weight and balance continue as the work goes on, all small but welcome surprises.
On the second disc, the four canons appear between Contrapunctus Nos. 13 and 14. This separates out the final movement, allowing Hewitt to give it a different character, more reflective and introverted. Or, at least, that is how it starts, but as its Bach spins his contrapuntal intrigues, Hewitt adds weight, through both tone and attack, to dramatically shape the movement. After which, we hear the chorale Wenn wir in höchsten Nöten sein, which C.P.E. appended to the first edition – a welcome gesture towards closure, especially in Hewitt’s compassionate reading.

The sound quality is good, with the piano miked closely, but still retaining some warmth. The accompanying literature is exemplary, and is dominated by a detailed essay by Hewitt herself detailing the contrapuntal and harmonic structure of each movement. The many fans of Angela Hewitt’s Bach won’t need a recommendation from me, but enthusiastically recommended nonetheless.
No comments: 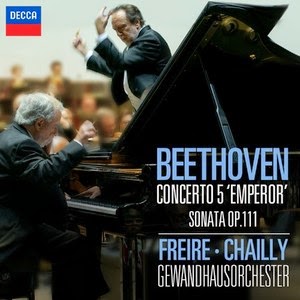 
Decca brings together two of its biggest stars for this “Emperor”, both seasoned Beethovenians. Nelson Freire and Riccardo Chailly don’t have quite the same take on this music, but their approaches prove to be complementary. Freire is lyrical and supple, always letting the line flow. Chailly offers more drama, drawing a focused tone from the orchestra, and always propelling the music in the faster sections.
The Gewandhaus Orchestra also fits well into the equation. The strings provide the ideal support for Freire, matching the smoothness and intensity of his piano tone, just as intense but just as nimble too. The woodwind soloists are another of the orchestra’s great strengths, and although their solos are only ever short here, each comes through with character and individuality.
The Adagio second movement is a particular treat. Freire’s tone sounds completely effortless, as if he is just breathing through the piano. Yet he has enough presence to carry across the orchestra without the players having to restrain from their elegantly shaped phrasing.
If I’ve one complaint, it is a lack of muscularity from Freire. This, the most heroic of piano concertos, could sometimes do with more gravitas. The opening of the finale, for example, flows too smoothly out of the Adagio, and there is little feeling of turbulence or grandeur. Freire compensates with yet more lyricism and elegance, and it is to the credit of both Chailly and his orchestra that they follow the soloist’s lead here; judging by their recent symphony cycle, they’d probably have done something more emphatic if they’d been working with a more heavy handed pianist.
The concerto is coupled with the Piano Sonata op. 111, but at approaching 25 minutes it is more than just a filler. Freire gives another lyrical, flowing performance, making what in other hands can seem a complex and intellectual work into an exercise in grace and elegance. It’s seductive and beguiling, and the work’s complex structure is well served by the pianist’s narrative approach, leading the ear through the various sections and always offering logical connections from one to the next. The opening of the second movement is magical. Here, for a few minutes, time seems to stop, as Freire draws out the Adagio melody with little concern for pulse or tempo. Then, as Beethoven elaborates the theme into a series of variations, Freire gradually brings us back down to earth, imposing discipline and pace, but still maintaining the elegance of his tone and line.
The documentation provided is slight, just a brief and severely edited interview with the pianist by James Jolly. Freire tells us he has been playing the “Emperor” since he was 12. That’s well over 50 years, and his intimate knowledge of the music is certainly demonstrated. He also reveals that this is to be the first release in a complete Beethoven concerto cycle. Apparently it is going to take a few years, the next release will be the Fourth Concerto, scheduled for 2016. On the strength of this first recording, it should be worth the wait.
No comments: 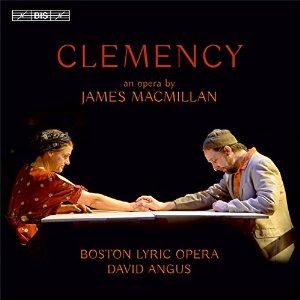 
The BIS label continues to do well by James MacMillan. This is their ninth release dedicated to his music, and, as with those previous recordings, a new work is presented, just a few years after its premiere, in a good performance and with the benefit of the company’s trademark high-quality audio.
Clemency is MacMillan’s third opera, following Inés de Castro and The Sacrifice (the latter is available on CHANDOS 10572, a Radio 3 recording). Unlike them, this is a chamber opera, for five singers and string orchestra. MacMillan and his librettist, Michael Symmons Roberts, proportion the work appropriately, the drama on a modest and domestic scale, and the duration less than three quarters of an hour. Unsurprisingly, the composer opts for a religious theme, a story taken from the book of Genesis about a visit by three travellers to the home of Abraham and Sarah. Over the course their exchanges, it becomes clear that the travellers are angels on their way to the cities of Sodom and Gomorrah.
Although little happens, there is plenty of psychological nuance here for the composer to address. Sarah is told by the travellers that she is to have a child, despite her advancing years, an issue that keeps her preoccupied from then on. Abraham intercedes on behalf of the residents of the doomed cities, and with some effect, though he is left feeling he could have done more. The sheer abstraction of the setting is problematic. The composer suggests in the liner note that there is something “terroristic” about the travellers, offering a tenuous thread of contemporary relevance. In fact the abstraction is well handled in the music, which includes some passing references to Middle Eastern scales and folk styles, but otherwise leaves the setting open.
The drama then is mostly verbal in nature, but proves ideal for the scale and scope of MacMillan’s musical intentions. He sets the words in a direct way, declamatory and clear with few melismas or decorative indulgences. Even without the visuals, the characters are well defined and the exchanges easy to follow. The string orchestra provides an imaginative support, more often than not confined to the lower registers to provide bass lines and varied accompanying textures. The harmonic language is fairly consonant, with both aggressive dissonances and explicit tonal harmonies reserved for key points in the drama.
The work was co-commissioned by Scottish Opera, Chicago Lyric Opera, Royal Opera and the Britten Sinfonia. It was premiered as Covent Garden by Scottish Opera, who then toured their production to Scotland. This recording is taken from the Chicago performances, which were apparently of a completely separate production with a new cast. The recording was made live from three staged performances. That’s never ideal, but the engineers do a good job of capturing the voices without any recessing apparent. The cast is strong, especially David Kravitz and Christine Abraham in the roles of Abraham and Sarah. Given the scale and duration of the work, their stamina is never tested, yet there are significant demands in terms of range and of tonal control at quieter dynamics, none of which pose either of them problems.
The only disappointment here is the filler. For the Scottish Opera production, the short work was presented as a stand-alone, but in Chicago it was decided to prefix it with Schubert’s Hagars Klage. A common biblical source links the two, but no other connections are apparent. The Schubert was apparently integrated into the staging, with Michelle Trainor singing both the lament in the role of Hagar and taking that role in the MacMillan. The Schubert is sung in English and presented in an orchestration that supplements the original piano with the string orchestra. All this may have made some sense when staged live, but on record it all seems somewhat irrelevant. The string arrangement makes Schubert’s already baggy hybrid work seem even more diffuse, and the tessitura of the solo part is too high for Trainor, who struggles in many of the higher-lying passages.
It is a shame that the Schubert comes first, and that it lasts for a full quarter of an hour. But once we are past that, the rest of this recording is well worth hearing. MacMillan doesn’t offer anything radical, and he deliberately limits the scale of his ambitions in every sense. Yet those ambitions are all met, and the result is a chamber opera that translates successfully to the audio medium, and that is well served here by both the performance and the recording.
No comments: