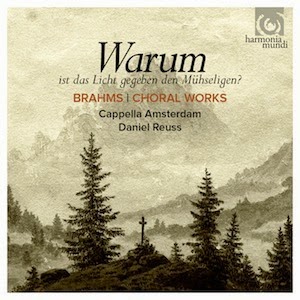 Nineteenth century choral music has suffered in the modern era through no fault of its own. The choral societies that sprung up across Europe, and for whom many of the Romantic greats composed, are no longer the cultural and social force they once were. Such choirs played a crucial role in Brahms’ career. Before his move to Vienna he conducted the Hamburger Frauenchor, and later he was chorus master of the Wiener Singakademie. Many short part-songs resulted from these appointments. But choral music was also an important dimension of the composer’s engagement with Renaissance and early Baroque music, documenting his research in his early years, and his absorption of those styles later on.
The selection of choral works here spans Brahms’ middle and late periods. The composer’s most popular choral works, the Liebeslieder Waltzes are avoided in favour of generally more serious works. The selection presented is not for completists. For example, it begins with the first of the two op. 74 Motets, but the second is omitted (though the liner note points out that 15 years separate them, no. 2 being composed first). We hear Schicksalslied, but in the arrangement for piano four hands rather than the orchestral original. And in a selection entitled Drei Quartette, we hear selections from opp. 92 and 112. Everything else, though, is presented in complete sets, the Fünf Gesänge, op. 104, Fest- und Gedenksprüche, op. 109, and Brahms’ final choral work, the Drei Motetten, op. 110. That last set is particularly evocative of the early Baroque, the liner note suggests Schütz and his Venetian mentors. Bach is another important presence throughout these works, with Lutheran chorale settings making regular appearances.
The whole programme is presented as a single, uninterrupted flow of elegant choral sound. A piano solo, the Intermezzo, op. 119/1, is included between two numbers, but the mellow elegance of both the harmonies and the piano sound allow it to fit seamlessly into the programme. The choir is quite large, about 30 singers, and the richness of their tone is continually satisfying. Harmonia Mundi captures the warmth and complexity of the choral sound well, and the church acoustic (of the Waalse Kerk, Amsterdam) is suitably warm and involving. Documentation, as ever from HM, is exemplary, with full texts and translations.
A satisfying sampling, then, of Brahms’ still underappreciated mature choral output. The composer may have had historical models at the front of his mind while composing most of this music, but Daniel Reuss and his Amsterdam Choir ensure that we are offered far more than just a history lesson.