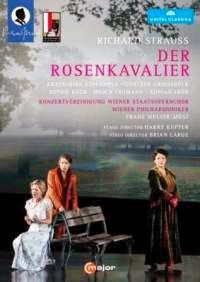 
A classy Rosenkavalier this, but a sinister one too. The production was the Salzburg Festival’s major contribution to the Strauss 150 celebrations of 2014, and the DVD is part of a Strauss series that has been appearing across the anniversary year. True to form, the Salzburg Festival gathers an world-class team, and the singing here is particularly impressive. But the production itself may be the most interesting aspect, one that engages closely with the spirit of the work but isn’t afraid to address some of its more unsavoury aspects face on.
Harry Kupfer updates the action to the early 20th century, the era of the work’s composition. The set designs, by Hans Schavernoch, elegantly evoke Vienna’s faded charms with a suitably nostalgic fin de siècle feel. Huge monochrome photographic images form the backdrop, cathedral roofs, cobbled streets, misty parks, that sort of thing. The sets are simple but effective, with two parallel conveyers, upon which are moved into position a bed and a doorway for the first act, a giant mirror for the second, the inn for the start of the third (this a more elaborate design), and a simple park bench for the conclusion. It is an approach that manages to fill the huge stage, although one that creates setting more through suggestion than literal representation.
This isn’t the most comical Rosenkavalier you’ll see on DVD. Kupfer engages with the various power dynamics at play in the story, which are brought into uncomfortably sharp relief. So Ochs, sung by Günther Groissböck, is not the lovable rouge we usually encounter, but instead a manipulative and decidedly unpleasant character. His rustic buffoonery is played down, replaced by a more urbane and calculating persona. We don’t laugh when he loses his wig – we’re too concerned about what his reaction might be.
In what is surely a deliberate contrast, the Sophie of Mojca Erdmann is petite and vulnerable. She lacks stage presence and vocal authority, and the character is hardly developed at all. Erdmann is capable of far more than this, but she is kept in check, musically and dramatically, to emphasise her victim status. Perhaps that dynamic, between Ochs and Sophie, is exaggerated, but it is powerfully presented nonetheless. Everything about Ochs here is predatory and self-serving – Strauss and Hofmannsthal might laugh that off, but Kupfer is not going to.
Similar dynamics could arguably be evoked between the Marschallin and Octavian, but Kupfer is less confrontational here, and both characters are presented in a more traditional way. Krassimira Stoyanova sings the Marschallin with the perfect combination of maturity and vocal agility, impressively nimble in the first act, and suitably emotive in the last. Even in this strong cast, hers is the standout vocal performance. Sophie Koch makes for a surprisingly masculine Octavian. Her costume is thoroughly ambiguous, a ponytail but sideburns too, while her voice is quite angular and brittle – not inelegant though, and certainly right for the part. Adrian Eröd is a suitably pompous and officious Faninal – another character that’s played straight without any comedic additions.
Kupfer keeps the stage fairly busy, and often has characters lingering in the wings when they should already have left. It’s not too fussy an approach, buy it’s one that involves many important details in the peripheries of the action. None of which makes life easier for video director Brian Large. He opts for close-ups most of the time, and we very rarely see the full stage. But the montage is patient, and the cameras are more inclined to linger on a face than to cut between them. It’s not an ideal compromise, but it’s one that is made necessary by Kupfer’s grand but detailed staging.
Franz Welser-Möst and the Vienna Philharmonic – a team arguably more qualified to render Viennese waltzes even than the composer himself. And certainly the Viennese lilt is much in evidence whenever the music does slip into a waltz, as it very often does. At other times, though, Welser-Möst can be a complacent. He rarely emphasises the drama of the score, and he has little interest in pointing up the often surprising orchestral colours that Strauss evokes. All of which is a shame, especially as his more accepting approach to the work is at such odds with Kupfer’s more confrontational reading. That said, Welser-Möst knows how to conduct the singers, who sound all the better for the space he gives them to phrase and shape.
Musically, then, this Rosenkavalier is more satisfying for the singing that the conducting, but it is the production itself that makes the release interesting. It is not the only way to present the opera, and many may feel that comedy is lacking. But there is a sense of honesty about Kupfer’s approach which puts the opera in a new light – less a Komödie für Musik, more a study in the dynamics of sex and power.