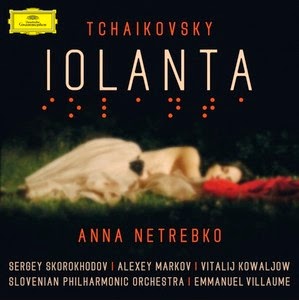 
Anna Netrebko is amazed, so the liner notes tell us, that nobody outside of Russia knows Iolanta. And perhaps she is right to be. It is a wonderful piece, a short, one-act opera with a fairy-tale story, elaborated with memorable themes and colourful orchestration. It is closer in mood to Tchaikovsky’s ballets than to his more famous operas. As it dates from his final years (it was his last stage work), it also shows affinities to the Pathétique, especially in the way that the composer is able to convey deep passions through seemingly carefree melodic ideas.
The plot is slender. The setting is southern France in the 15th century. Iolanta is the daughter of the King René. She is blind – hence the Braille on the cover image – but does not know this, as she has been confined alone to a secret garden her whole life. She is betrothed to Robert, but when he appears, she instead falls for his companion Vaudémort. Over the course of the opera’s 90 or so minutes, she is released from her original betrothal, cured of her blindness by a physician named Ibn-Hakia, and generally elevated from her pitiful state in time for a radiant finale.
The piece is also an excellent vehicle for Netrebko, who dominates the opera in the title role. She is placed far forward in the sound stage, and while the audio puts her voice under forensic examination, the evenness and purity of her tone are never found wanting. Perhaps she is a little fresher at the beginning than at the end, but only by a fraction. The libretto (by Tchaikovsky’s brother Modest) and music are contrived to give each of the principals at least one big number, and then to combine them into favourable combinations for the scene climaxes. The whole cast is strong, but the other two singers who really stand out are Sergey Skorokhodov as the tenor love interest, Vaudémort, and bass  Vitalij Kowaljow as King René. Both are ideally Russian, but not to the point of stereotype. Skorokhodov brings an Italianate lyricism to the part, though his singing is still coloured and firmly articulated by all those voiced Russian consonants. Kowaljow is powerful and authoritative, but without the thundering profundo we might expect from a Russian in the role. No weak links in the supporting cast, and impressive performances from choir and orchestra too.
Big record labels don’t dominate the classical music world the way they used to, but this release demonstrates the benefits they can bring to a recording project. The recordings were made live in concert in 2012, in what sounds like a fabulous acoustic at the Philharmonie in Essen. Netrebko and co were there as part of a tour, organised by U Live, the concert management arm of Universal. And this release has been timed to coincide with another tour with the same work in 2015. Naturally, the label wants to show its star soprano in the best possible light. The hand-picked and predominantly Russian cast helps there, as does the well rehearsed ensemble, who have clearly become intimate with the opera over the course of the tour. Audio standards are spectacular – perhaps a recording that wasn’t an artist vehicle would give less dominance to the soloists and a more even balance with the chorus and orchestra, but that’s a minor grumble. And the packaging is to a standard that few smaller labels would even contemplate, even including a full libretto, in French, German, Russian (transliterated – I guess they’re not planning to market it there) and English. So far, almost every Netrebko release on DG has been a mixed recital disc (a DVD of La bohème the exception), but this new release is doubly attractive: Not only does it present Netrebko herself at the height of her powers, but it also introduces a scandalously neglected work, presented here in a compelling and convincing interpretation.