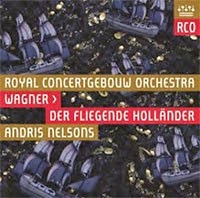 A Flying Dutchman  from Amsterdam – what could be more appropriate? In fact, this recording is as international as any Wagner performance, the orchestra itself the only Dutch contingent (even the choirs are German). Based on two live performances given in May 2013, the recording has much to offer, not least the cast of world-class soloists that would be the envy of any opera house. The greatest interest, though, is likely to be generated by the young Latvian conductor Andris Nelsons – hot property in Wagner just now, as he is in Mahler, Strauss, Tchaikovsky and … just about everything else. He certainly makes this Dutchman his own, and he clearly knows how to get the best out of the assembled company.
One aspect, though, of Nelsons’ performance is likely to meet with controversy: his tempos. Everything here is slow – not to the point of ridicule, but almost always well behind the norm. That really stands out in a work that is more often presented as a single, breathless expanse, as best exemplified by Barenboim’s Berlin Staatsoper recording on Teldec. Barenboim whips up a storm in the opening bars, which never seems to subside until the very end. Nelsons takes the opposite approach. The energy he generates in the opening bars has already dissipated by the time we reach the second theme. The results are more considered and more episodic. Fortunately, Nelsons always keeps the tempos flexible – there is space here for momentum when required – and finds an appropriate pace for each section and scene. His approach is most effective in quiet, ruminative passages, like the timpani introduction to Daland’s “Mein kind, du siehst mich auf der Schwelle…” in act II. The downside is that the storms never quite have the energy we are used to experiencing.
The big names in the cast all deliver, and singing-wise this is a very satisfying recording. Kwangchul Youn and Terje Stensvold are both known quantities as Daland and the Dutchman, and both give commanding performances here, even if they are frustratingly difficult to tell apart. Arguments rage over the relative merits of Anja Kampe and Nina Stemme, but for the time being, Kampe seems to be the first choice for Senta. Her performance here is powerful but nuanced. Her vibrato can be heavy on the ear but is certainly appropriate to the repertoire. Less convincing is the way she swoops up to the high notes – a deliberate phrasing device no doubt, but one that feels like an affectation after a few minutes. She also breaks phrases for very obvious breaths in some exposed passages, though perhaps this is a consequence of Nelsons’ slow tempos. Christopher Ventris has a lot of character and presence as Erik, it is just a shame that his tuning is occasionally wayward, only in a few passages, but enough to stick in the memory.
As so often with orchestra own-label recordings of operas, the real star here is the orchestra itself. The Concertgebouw is on top form, and the recording engineers seem to have prioritised their contributions throughout. In the runs in the overture, every note in the violin parts is audible, and the balance and clarity of the inner textures is always impressive. The deep, rumbling timpani are satisfying too. Vibrato from the solo horn might jar in some ears, but it is only very slight. Excellent choral singing too, from the WDR and Bavarian Radio choirs (how did they get this gig?) – larger forces than you’d hear on an opera stage, but the added heft is used to impressively dramatic effect.
No SACD for some reason. Any concerns that RCO Live has dropped the medium are allayed by more recent releases, including an impressive Bruckner 6 and 7 with Mariss Jansons (review to follow). The difference in resolution is obvious, but this is still a very well engineered recording, and aided at every step by the warm but clear acoustic of the venue and the orchestra’s affinity with its many virtues. RCO Live provides a libretto in German, English and French, an increasingly rare luxury, but a deciding factor for many prospective buyers.
Mixed views then. Nelsons’ slow speeds set this apart from the burgeoning competition, though not necessarily for the better. Most of the cast can be heard singing these same roles in equally fine recordings elsewhere.  Definitley worth hearing for the orchestra itself, and perhaps too for Nelsons’ idiosyncratic approach, if other recordings leave you short of breath.
No comments: 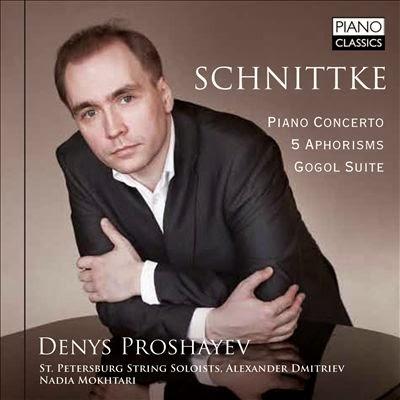 
Schnittke’s Concerto for Piano and Strings is one of his most popular works, but it’s been a slow burner on disc, a recording every couple of years since early 90s (it was composed in 1979). The concerto is unquestionably one of Schnittke’s greatest works and, despite its often intense dissonance, it’s one his most accessible too. Those unfamiliar with the composer’s work could do worse than starting here, and Denys Proshayev’s reading makes an excellent case for it: clear, lucid, and engaging throughout.
A brief word on nomenclature: The cover describes the work as “Piano Concerto,” a singularly unhelpful designation, given that Schnittke wrote four. But each is for a different ensemble so the full instrumentation will usually suffice, in this case concerto for piano and strings. There has been a tendency in recent years to number Schnittke’s piano concertos, but it hasn’t really caught on. If and when it does, this one is No. 3.
The concerto was written for Vladimir Krainev, who was Proshayev’s teacher, and to whose memory this recording is dedicated. Krainev premiered the concerto with Alexander Dmitriev, who also conducts here: valuably continuity indeed. Proshayev has a clear tone and lucid technique. He prioritizes clarity over histrionics, yet never skimps on drama. If the reading occasionally seems overly controlled, that is only by comparison with some of the more impetuous readings out there, which seem messy in comparison to him.
He has an excellent feel for the music’s quasi-liturgical atmosphere, something that comes across all the better for the church acoustic in which the recording was made (the concerto was recorded in St. Petersburg, the other works in Berlin). Working with a Russian string ensemble has the advantage that the players really understand the significance and the gravity of the quotations from Orthodox chant. A few more players would have helped though, as the string sound is often very thin (the Russian score gives 6,6,4,4,2; the Western edition 12,12,8,8,4—we’re clearly in the former category here). Schnittke doesn’t help matters by demanding big, round textures but for harmonies that are intensely dissonant. The smaller ensemble does have the advantage of allowing a very natural sense of balance with the piano—everything is always clearly heard and without any sense that the strings are being restrained for the pianist’s benefit.
The number of versions of this concerto currently available is at least into two figures. An episode of BBC Radio 3’s Building a Library a few years ago went through those then available and come down in favor of Viktoria Postnikova and Gennady Rozhdestvensky on Erato (now also on an Apex reissue). Though I haven’t heard that recording in some years, I remember it being more incisive than this—less atmosphere but more drama. At any rate, Proshayev comes in pretty close to the top, even in a crowded field that also includes Marc-André Hamelin, Roland Pöntinen, and Krainev himself.
The disc opens with the Five Aphorisms, a late work, written in 1990. Its textures are ascetic: The liner note by Susanne Stähr cites Webern as an influence. As with Webern, there is a fine line here between studied austerity and casual indifference, so maintaining the sense of concentration is crucial. Proshayev manges that well—the silences are as meaningful as the sounds. The benchmark is Boris Berman on Chandos, but again Proshayev is competitive with the best, and has marginally superior sonics.
The Gogol Suite presents Schnittke’s lighter side—it is slapstick theater music, full of comedy effects and gratuitous historical quotations. It’s another work with identity problems, also going under various translations of Gogol’s title: Dead Souls, The Dead Soul Register, and The Inspector’s Tale. What we have here is twice removed from the original incidental music, which was arranged into an orchestral suite by Rozhdestvensky and from that to a two-piano version by Valery Borovikov. One of Rozhdestvensky’s movements is omitted, but as that accounts for less than a minute of music, it’s no great loss. The absence of an orchestra is more keenly felt, especially as most of the historical references—Beethoven’s Fifth, Swan Lake—are from orchestral works. It is a shame to lose the comb-and-paper episode in the finale too. Well played though, by both Proshayev and his duo partner Nadia Mokhtari. They really get into the spirit of the piece, plenty of slapstick, and this time not even a hint of undue restraint.
A well played and well recorded program then. My only complaint is with the selection of works, which seems almost random, moving between eras and performing forces with each piece. There is plenty more solo or concertante music that could have filled out the disc, and the result would have been more coherent. Also, the Five Aphorisms are actually for piano and reciter. The idea is that poems by Joseph Brodsky are interpolated between the movements. Schnittke wisely chose a poet who wrote in both Russian and English, facilitating performances in both East and West. But as yet, nobody has recorded the Aphorisms with the poems included. No reason then to direct the blame specifically at Proshayev, but it would have made a good selling point. Otherwise, the disc is recommendable primarily for the concerto.

This review appears in Fanfare Magazine, issue 38:5.
No comments: