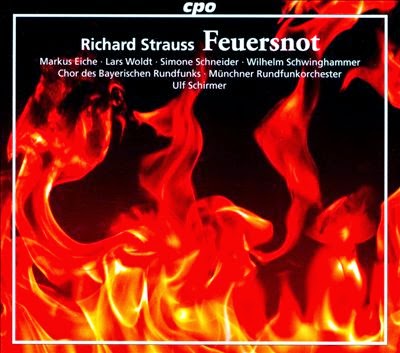 
Strauss’ second opera is a rarity, both in live performance and on disc. But it contains some glorious music, from a composer at the height of his powers, so cpo is to be congratulated for what appears to be the first commercial recording in many decades. It is easy to see the work as deserving of its obscurity: the salacious plot got it into all sorts of trouble in the years following its 1901 premiere, and the contrived satire behind it seems self-serving and wholly dependent of the cultural milieu of its times. None to which can be ignored, of course, but the music that Strauss writes elevates the whole project and sets it in a wider context. This is Strauss on his way from tone poet to master of opera, and everywhere the music is looking forwards, particularly to the sophistication of Rosenkavalier and the physiological depth of Die Frau ohne Schatten. It is given here in a performance that brings out all those qualities, and that makes an excellent case for Strauss’ score.
Wagner looms large over everything here. Strauss is dealing with Wagner’s legacy in an open and often confrontational way. The result is a satire of Wagner, of both his music and his ideals. Musically, you’ll hear overt references to many of Wagner’s mature operas, and particularly the Ring, which proves fertile ground for satire, given the recognition factor of its Leitmotifs. Fortunately for Strauss, Wagner is just as well-known today as he was then, and idolised to almost the same extent. So the references are easy to spot, and the deflation of the Wagner cult retains its relevance. The story concerns preparations for a St. John’s Day midsummer celebration. The local mayor has a daughter and there is much debate about her possible betrothal to a newcomer in town. So far so Meistersinger. But the place is Munich (the better to lampoon Wagner himself) and the newcomer, Kunrad, is an apprentice wizard. When Diemut, the mayor’s daughter, rejects Kunrad, he takes revenge by extinguishing the fires that are central to the midsummer celebration. In the end Diemut relents, and the impasse is resolved through “redemption by sex”, a deliberately crass inversion of Wagner’s redemption by love, but a great excuse for one of Strauss’ many erotically charged musical climaxes to close the work.
Despite the relatively straightforward plot and the short running time (it’s a one-acter of 90 minutes) the score includes a remarkable 15 named parts and also calls for choir, children’s chorus and a huge orchestra. So, on top of its questionable morals and taste, there are also practical issues that keep it well beyond the standard repertoire. But for this recording, an excellent company has been assembled. The project is a co-production between Bavarian Radio and cpo. It was recorded at Munich’s Prinzregententheater in September 2014, a few days ahead of a live concert performance there, a video of which is available at https://www.youtube.com/watch?v=bplGSjUWQL0.
The pick of the cast is Simone Schneider as Diemut. Her voice has a richness and alto-like warmth, right up to the top of the soprano register, always attractive and with excellent intonation and tonal control.  Markus Eiche is also good as Kunrad. He has the lion’s share of the singing, and strain is occasionally evident, especially towards the end of his mammoth 10-minute narration on the second disc. No notable weak links in the supporting cast (impressive given the sheer numbers), and special mention should go to bass Lars Woldt, who perfectly channels Pogner as the mayor. Credit too to the Kinderchor des Staatstheaters am Gärtner platz. Strauss places some heavy demands on his children’s choir, but this ensemble is well up to the demands
Ulf Schirmer leads a propulsive and incisive reading, full of rhythmic vitality and crisp, focussed phrasing. The sound is of a good broadcast standard, with plenty of detail although a little lacking in vibrancy and presence. A libretto is included, in German and English (somehow squeezed into the double jewel case) and there is also handy “Kleines Münchner Glossar”.
Competition here comes from historical reissues, a Keilberth recording from 1965 and a Kempe recording from 1958, the latter a leisurely account at the far end of the spectrum from this. There is also a 1985 recording from Heinz Fricke, which received mixed notices when re-released in 2013. Chances are, then, that for the quality of the audio, the consistency of the cast and the vitality of the conducting, this will become the recording of choice for Strauss’ morally suspect but always highly listenable opera.