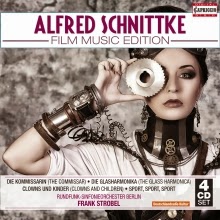 
This is Alfred Schnittke’s CV, a portfolio of the best work from his day job. Between the early 60s and the mid-80s, Schnittke wrote music for over 60 films. It played a crucial role in his development as a composer, and particularly to his polystylistic aesthetic. All those stylistic juxtapositions, and the cuts and jumps in the musical narrative, stem directly from his incidental music. The film studio also provided a useful laboratory for the composer, at a time when concert music was subject to heavy censorship, music for films tended to get in under the wire. Melodic and accessible were required qualities of course, but the orchestral combinations with which these were delivered are invariably imaginative and unusual.
And just as film music proved ideal for Schnittke, so Schnittke proved ideal for film music. He had the ability to immediately set a mood or evoke a scene, right from the very first note. The 10 concert suites presented here, each derived from a separate film score, take in a range of genres. Most are light, music for comic films, with plenty of over-the-top marches, maniacal dances and slapstick sound effects from the percussion. But there are some darker scenes evoked here too: the surreal world of Andrei Khrzhanovsky’s cartoon The Glass Harmonica, and the oppressive atmosphere of Larissa Shapitko’s wartime drama The Ascent.
Just as in his concert music, Schnittke freely mixes the superficial with the profound. His language of musical reference and allusion is as engaged here as in his most polystylistic concert works. The score for Sport, Sport, Sport, a spoof documentary about a sports physiotherapist with delusions of grandeur, plays out like a Jacques Loussier jazz response to The Musical Offering. At one point we hear the main theme from the Manfred Symphony played on accordion, for reasons that are probably more clear in the context of the film. And everywhere Schnittke’s ability to switch into immediately switch into a chosen style is apparent, the level of irony in each case perfectly gauged to the context.
While the music here is entertaining on its own terms, it also tells us a lot about Schnittke’s concert works, many of which borrow freely from his film scores. So you’ll hear early versions of music that ended up in the Second Violin Sonata, First Concerto Grosso, Second Cello Concerto, Suite in the Old Style…. Often the music in its earlier incarnation is richer in texture. The music that became Suite in the Old Style, for example, is for full orchestra as the soundtrack to the film Adventures of a Dentist, but was reduced to violin and piano for the suite. But with that added richness comes a reduction in ironic intent. The score for The Fairytale of the Wanderings postdates the First Concert Grosso, but much of the music is almost identical. But, orchestration apart, the big difference is the fact that, in the film score, the Baroque allusions are taken at face value, and not used to subvert generic models or listener expectations.
Each score is presented in a concert suite arranged by the conductor, Frank Strobel, an ardent champion of Schnittke’s film music, and much other film music besides. I met Frank at a conference in Hamburg last year and asked him about his work on Schnittke’s music: It’s a labour of love, to say the least. He and Schnittke collaborated on several projects in the last years of the composer’s life, and Frank played an important part in facilitating Schnittke’s music for The Fall of St Petersburg, his only ever live score for a silent film. Schnittke also advised on much of Strobel’s work in arranging film scores for concert performance. Since Schnittke’s death, Strobel has continued to bring this music to the concert hall and the recording studio. Not an easy task. A typical Schnittke project will involve visiting Moscow to lobby an archive to release the manuscript. If and when this is achieved, Strobel must then check it against the final soundtrack, to account for the numerous, and often very significant, edits to the music made by Schnittke during the recording process.
Then it’s into the studio, with the Berlin Radio Symphony Orchestra, who sound excellent on these recordings. Technically, there is little to challenge the players here, but their ability to move between the various styles, and to make each sound authentic (especially the jazz) is a key factor in the success of the project.
This four-CD set is a reissue, the discs originally recorded and released separately between 2004 and 2006. Don’t let the generic cyberpunk image on the box put you off, the production standards of the reissue of higher than it suggests. The booklet contains an introduction that claims to be from Strobel himself, although the fact that it repeatedly refers to him in the third person suggests otherwise. Then we get details about the original films along with a brief plot synopsis for each.
My only major complaint about the reissue is that it is in standard CD format, where the original releases were SACD. That’s a great shame, and it is hard to imagine that the financial saving, to label or customer, outweighs the loss of resolution.
That apart, this set is highly recommended. It will be particularly attractive to those with an interest in Schnittke’s music and the path much of it took from the film studio to the concert hall. Also recommended to fans of film music in general, as this represents the genre at its finest. And there is much here too for general audiences to enjoy: Whatever historical significance this music may have, it’s well worth hearing just because it’s so fun.
4 comments: