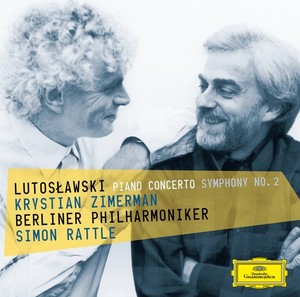 
Krystian Zimerman knows how to use his industry clout. Anything with his name on will sell, of course, but even so, the odds against the current recording are extraordinary. Despite his uncompromising Modernism, Lutosławski is a favorite with record labels, and both of these works are available in many other versions, most of them very fine. The Piano Concerto in particular is up against a seemingly unbeatable competitor: the first ever recording, which also features Zimerman (the dedicatee). To compound matters further, that earlier recording is conducted by the composer, released on the same label, and still in print (DG 431 6642). It’s even advertised on the back of the liner to the present release. But we should be thankful that DG took the gamble, because this new version is far superior, and easily takes preference, even over its august ancestor.
Zimerman’s own reading hasn’t changed much since his previous version, made with the BBC Symphony in 1989, the year after its premiere. His effortless virtuosity is equally apparent, then as now. If anything, he has relaxed into the music more. The concerto has entered the canon in the intervening years, so Zimerman knows that he doesn’t have to make such an emphatic case for it. That mellow, sanguine tone that is the trademark of his playing comes through with more ease here—it’s more Chopinesque all round. Which isn’t to say that he plays down the drama, the concerto is just as turbulent, involving, and unpredictable as ever.
Simon Rattle is another ardent Lutosławski champion, but he avoids imitating the composer’s own approach to conducting the work. Tempos are similar (the score’s metronome markings see to that), but Rattle is less impulsive and less emphatic. Even in the fastest music, there is always space around every note, and where Lutosławski pushes the BBC Symphony to extremes of dynamics and accentuation, Rattle always seems to have more in reserve. But again, the dramatic power of the work remains undimmed, and there is never any sense that soloist, conductor, or orchestra are holding back.
The two qualities that raise this above Zimerman’s previous version are the audio and the orchestral playing. The concerto was recorded in sessions at the Philharmonie (the symphony there too, but live), and the hall’s acoustics respond beautifully to the mellow, floating textures. Lutosławski often writes quiet music, but with such detail that every nuance needs to be heard. Every nuance is heard here, and the effect is spectacular. The piano is always apparent across the orchestra, even when their respective textures call its dominance into question. Of course, Lutosławski knows what he is doing, and no doubt he is relying on Zimerman’s always clear articulation and touch to project the piano’s lines.
Rattle’s advocacy of Modernist music with the Berlin Philharmonic has been laudable, but has sometimes seemed to waste their talents. That lush, velvety tone, cultivated over the decades to bring an extra level of sophistication to Bruckner and Brahms, seems out of place in Messiaen, for example, even reducing the impact of some of his more austere scores. But Lutosławski’s lush, complex textures are another matter. The Berlin Philharmonic sound is ideal here, not only for the sheer elegance the orchestra displays, but also for the details that it is able to project, again aided by the excellent audio.
The symphony feels like a bit of a filler, not least because it is a live recording (although that itself is a testament to Rattle’s adventurous programming in Berlin). Comparisons with the composer’s own recording (with the Polish Radio National Symphony Orchestra, currently available on EMI 9072262) again find Rattle in a less declamatory mode. In fact, Rattle’s recording is five minutes shorter, but at every turn it feels more relaxed. The issue may be that Rattle, unlike Lutosławski, is able to rely on both the orchestra and the sound quality to bring out the details of the quiet passages, of which there are many. This new version is certainly satisfying, although from what I’ve read about Edward Gardner’s recent recording on Chandos (5106), Rattle has some serious competition for the top spot here.
The short running time of this disc should be noted, as I’m sure it is selling at full price. In fact, Esa-Pekka Salonen and the Los Angelese Philharmonic offer the same program on a Sony disc (67189) and manage to squeeze in two other works, one of them the substantial Chantefleurs et Chantefables. But that apart, this Zimerman/Rattle collaboration comes highly recommended. Whatever this mercurial pianist’s motivations for returning to the concerto, we should all be glad he did.