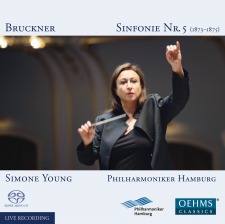 Simone Young here completes her Bruckner cycle, and with it her tenure with the Hamburg Philharmonic and Opera. Her reputation has risen steadily throughout the decade she has been there, largely thanks to her impressive recordings on the Oehms label, not least her Ring cycle and her Bruckner symphonies. Both demonstrate how Young has positioned herself as a potent and guiding force within the German musical establishment. Her performances of this core repertoire are always deeply idiomatic, but also have enough personality to stand out from the crowd. Young’s Bruckner (and her Wagner too) is always suitably grand and imposing, but it never drags. Relying on the virtuosity of her Hamburg players, she is able to give the music its full weight and sonic opulence, but usually at tempos slightly faster than the norm. That, combined with a keen sense for the music’s agogic impulses – all the varying accents and attacks that create the foreground texture and articulate the phases – allow her to propel the music, but without ever trivialising it.
One selling point of this Bruckner cycle has been Young’s use of William Carragan’s editions of the earliest versions of each symphony. The Fifth, and before it the Ninth, were presumably left until the end because no such Carragan edition exists for either (a lost 1876 version of the score awaits his reconstruction work). Young chose not to use Carragan’s completion of the Ninth Symphony finale, but compensated by presenting a very fine reading of the standard Nowak. That recording was the highlight of the cycle, the work really responding to Young’s disciplined but dramatic approach.
The Fifth ought to work just as well, and Young’s interpretation is certainly similar, but this recording is not the all-round success of its predecessor. The balance between propulsion and grandeur too often veers towards the former. The fast tempos are not the problem – at 73:23 Young shaves off just two or three from the average – so much as the lack of sympathetic rubato. Brass chorales always seem integrated into their context, rather than transcending above it. That is a minor, if recurrent, problem in the first movement, but is fatal to the finale. The grand chorale, that completely changes the course of the symphony at its first appearance and goes on to form the redemptive conclusion, is introduced without any great ceremony, and its repeated appearances, while always loud, seem lacking in gravitas. All this, combined with a lack of intrigue and mystery at the start of the first and last movements – partly a result of the fast tempos, but probably a deliberate interpretive choice – narrows the work’s dramatic profile, and with it the spiritual conviction on which it relies.
Which is a shame, because in many other respects this is a fine reading. Both of the inner movements benefit from Young’s debonair refinement. Phases in the Adagio are always elegantly shaped, even within the generally strict tempos, and the Scherzo is given a visceral intensity through the combination of hard attacks and weighty textures. On the whole the orchestra plays well, although the brass loses tonal control in the some of the first movement climaxes. Audio standards (listening to the SACD stereo mix) are as high as ever, the strings in particular given real immediacy.
For all its disappointments, this final release in the series has the distinct advantage that it continues an interpretive trajectory common to every release in the cycle. Bruckner recordings today seem to fall into two camps, the old-school weighty and monumental approach of Thielemann and Haitink, and the fleet, dynamic approach that is becoming fashionable and is best exemplified by Gerd Schaller’s competing cycle of the Carragan editions. Simone Young has found an effective way of combining the best of both worlds, and has demonstrated that her distinctive perspective has benefits for each of Bruckner’s symphonies. This Fifth isn’t the best of them, but it is still a decent one to close the cycle. If you haven’t been keeping up with these releases as they have appeared, and want to know what Simone Young can do with Bruckner, the Ninth Symphony recording would be good place to start.