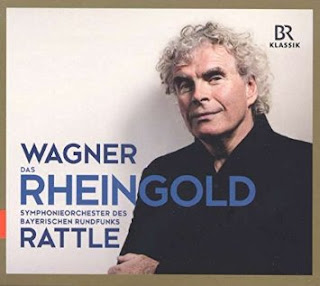 
Simon Rattle hasn’t established much of a reputation as a Wagnerian, which is surprising, given the number of well-received concert performances and stagings he has conducted: Tannhäuser at Covent Garden, Walküre and Lohengrin  with the Berlin Philharmonic, Götterdämmerung at Vienna State Opera, and no doubt others too. This Rheingold demonstrates that he knows what he is doing. It’s a dramatic reading, but not one that’s overly driven into exaggerated gestures and over-fast tempos. Rattle shapes the music effectively, and the results are distinctive, and free of the tempo affectations that he has a habit of introducing into core-repertoire works. It is a concert performance (edited together from two evenings), originally broadcast live on Bavarian radio. No suggestion here that a full cycle is planned, which is a shame, because this a great reading that stands up well to comparison with any recent competition.
The recording is presented in standard CD audio, but the quality is high, even higher than on the live broadcast, put out on the internet at BR Klassik’s impressive streaming rate. There seem to have been some balance adjustments since, with the bass boosted in many of the tuttis. That gives real weight and presence to the double bass pizzicatos, and to the lowest of the timpani, but both lose some tonal focus as a result. The much-derided acoustic of the Herkulessaal sounds fine here, warm and spacious but never to the detriment of the music’s details.
You won’t mistake this for a stage performance. There is little of the dramatic frisson that live staging brings, and little sense that the singers are ever communicating with each other. Rattle also takes some tempo indulgences that he probably would not get away with in the pit, the slow tempo of the transition into the second scene a prime example. The singers are arranged along the front of the stage, and all seem to be stationary. For some reason, most of the singing comes out of the left channel, although the photo on the back of the booklet shows the singers to be evenly distributed from left to right.
High quality audio can often ruin a quiet opening, the sheer fidelity of the reproduction preventing the music from appearing out of silence. The first note here is clearly audible, yet the mystique remains.  Here, and throughout, Rattle makes everything sound definite and deliberate, but without descending into pedantry.
A few minor tuning problems in the Wagner tubas at the first statement of the Rheingold theme is about the only fault to be found with the otherwise excellent orchestral playing. The Bavarian Radio Symphony Orchestra isn’t quite as distinctive in its string tone as Rattle’s Berlin band, nor as rich in its wind sound, but the result is that the players never hog the limelight, insuring the singers always take centre stage.
A vocally well-matched trio of Rhinemaidens introduce the Alberich of Tomasz Konieczny. His voice is impressively consistent, even across the broad dynamic range of the part. His voice is clear, but with a suitably dark edge. And he has the ideal menacing laugh.
Michael Volle is better known for his Beckmesser, but he makes a good Wotan too. His voice is low for the role, with a more bassy presence than we usually hear. His enunciation is excellent, and the lilt of his slow, wide vibrato makes for a continually attractive tone. Elisabeth Kulman is similarly clear as Fricka, her tone satisfyingly earthy. She has a habit through, of adding swooping portamentos into the line; it’s a daring effect but it’s often too much.
No real weak links in the remaining cast. Eric Halfvarson is a known quantity as Fafner, and he has considerably more weight and presence than Peter Rose as Fasolt. Burkhard Ulrich, as Loge, has a fast, hectoring vibrato, not too unpleasant, but it really makes him stand out from the rest of the cast. He also struggles to sustain to the ends of phrases in the, admittedly very difficult, last scene. Janina Baechle gives a suitably mysterious Erda, her tone ravishing. Sadly, Rattle doesn’t make much out of her appearance – it doesn’t interrupt proceedings as it should. Benjamin Bruns sounds a little insecure as Froh, but only by comparison to the rest of this stellar cast. And some wonderful singing from Annette Dasch as Freia, though the tiny role is only a cameo for a singer of her standing.
Although Rattle never exaggerates any of the set pieces, most of them come off very well. The giants’ motif is always taken at tempo, never slowed, but the huge brass sound ensures impact. The build-up to the anvils at the start of the Scene Three is just awesome, a real highlight of this recording. The anvils themselves are great too, and there is a wonderful picture in the liner of the six percussionists all huddled round the tiny table of instruments. Tempos in Scene Four are surprisingly relaxed, as if Rattle is pulling back to allow the singers more space to shape their phrases. But he builds up the drama again for the Gods’ Entry into Valhalla, a fitting and memorable conclusion, just a shame the harps are inaudible.
Balance problems like that could have been better addressed in the studio, while greater drama may have been achieved on stage. But this concert recording is what it is, and whatever its flaws, it is definitely worth hearing. Smart packaging from BR Klassik, with a well-translated essay and - rarity of rarities these days - a libretto in German and English. An impressive recording all round, and hopefully one that will bring Simon Rattle some of the accolades his Wagner conducting so richly deserves.