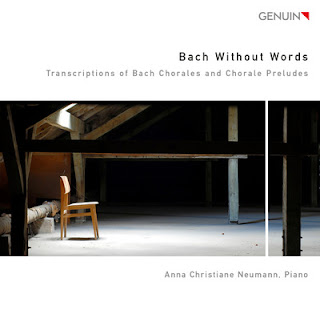 It’s not often Ralph Vaughan Williams and György Kurtág appear on the same track listing. The list of arrangers and transcribers here is amazingly diverse, although, perhaps predictably, the results are more unified. But each has a subtly different take on Bach’s music, and the results are continually fascinating, engaging, and all do justice to the great man’s work.
The arrangers’ art is not the primary focus of this album. It is titled, Bach Without Words and, as its slightly pretentious liner notes (with quotes from Heidegger, among others) explain, the primary issue here is the viability of Bach’s vocal music separated from their texts. This must be a greater concern for native German speakers than it is for the rest of us, and the extent to which the album needs to justify itself may give us more secular listeners pause for thought—how much are we sacrificing by not engaging with Bach’s words and the liturgical culture in which he worked?
The sheer popularity and fame of many of the transcriptions here suggests that the battle for them is already won, and despite the pianist’s stated aims, the over-riding impression is of a celebration of the art of transcription, and of the versatility of Bach’s music, even his vocal music, in contexts beyond those for which it was intended.
The program moves between Bach’s chorale harmonizations and his chorale preludes based on the same themes, typically presenting the chorale followed by a prelude based on it. The chorale harmonizations are taken from the Albert Riemenschneider anthology, and if, like me, you spent many undergraduate years studying this purely as a textbook, you will be pleasantly surprised at what satisfying piano music it makes. Pianist Anna Christiane Neumann, no doubt with the words of each chorale going round her mind as she plays, gives elegant and beautifully shaped renditions, appropriately strict in style, but always with the emotional experience of the listener as the primary concern.
Among the arrangers of chorale preludes are some familiar suspects. The appearance of Busoni’s name comes as no surprise, and the warm, flowing textures that he achieves with this music are satisfying indeed. But the success of every selection here calls into question the amount of input that each of the arrangers has had. Obviously, the pedal line must be integrated into the music for (mostly) two hands, then there is the question of realizing ornaments, and finally of adding phrasing and dynamics in ways that the organ might not be able to express. Frank Bridge deals with the extra notes from the pedal part in Komm süßer Tod, BWV 478, with some audacious broken chords, but all the other arrangers manage to avoid this. Arthur Willner’s (1881–1951) arrangement of “Wir setzen uns mit Tränen nieder,” the final chorus of the St. Matthew Passion, is the most ambitious downsizing project. It fits well into the tone of the album, even though, unlike in the organ music, there is a definite feeling of missing out, on extra counterpoint as much as on vocal and instrumental texture.
Neumann gives excellent performances throughout. Most of these arrangements are from the Romantic era, and that is exactly where she locates the album’s aesthetic, playing with a warm, rounded tone, and not skimping on the sustain pedal when required. The Mendelssohn-Saal of the Leipzig Gewandhaus has an ideal acoustic, the perfect balance of clarity and warmth, captured with gratifying immediacy by the engineers.
To further vary the program, Neumann is joined in five numbers by a colleague, Anja Kleinmichel, for four-hand arrangements by Reger and Kurtág. The Reger, which closes the program, is a curiously restrained transcription of Air on a G-String, which has a certain austere beauty but feels bare without any ornamentation, written or improvised. The Kurtág, by contrast, is the absolute highlight of the disc. The sheer imagination that he puts into distributing the lines among the four hands far surpasses any of the more dutiful Romantic-era contributions. Kurtág transcribes Bach to play with his wife, Márta. She is the professional pianist, and gets all the knotty counterpoint. He plays the cantus firmus, often leaning over her to play between her hands, or taking the lines right up to the top of the piano. He’s also fond of doubling the chorale themes at a distance of two or three octaves, an effect at once stately and ethereal. The Kurtág arrangements here are the opening Sonata from Cantata 106; O Lamm Gottes, unschuldig; Aus tiefer Not schrei ich zu dir, BWV 687; and Allein Gott in der Höh’ sei Her’, BWV 711. All are given exemplary and profoundly moving readings by Neumann and Kleinmichel. Simply exquisite.