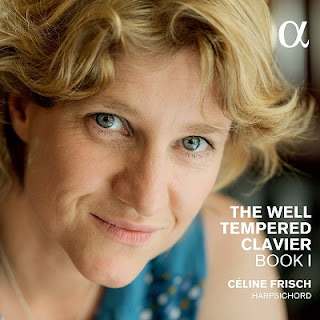 
Harpsichordist Céline Frisch has an impressive discography on the Alpha label, and since 2000 has been making well-received recordings of Bach’s keyboard works, including the Goldberg Variations and, with Café Zimmermann, the keyboard concertos, and gamba and violin sonatas. More recently, she has branched into French Baroque repertoire—Rameau, d’Anglebert—as well as making some interesting forays into more modern music, with discs of de Falla and Yanov-Yanovsky. This set marks a return to Bach, with an account of perhaps the most central work in the harpsichord’s canon. It’s an impressive reading: engaging, vibrant, and distinctive, though without ever sounding idiosyncratic.
The liner notes, by Peter Wollny, survey the work’s history and the temperament innovations from which it grew, but tell us nothing about the performer or her instrument, which is only briefly alluded to elsewhere in the liner as “harpsichord 1995, Anthony Sidey & Frédéric Bal from Silbermann original.” That suggests an instrument modeled on one from Bach’s time, the 1730s perhaps, and its robust and resonant sound suggests something substantial with two keyboards. The instrument’s ability to sustain is remarkable, though almost certainly aided by the recording acoustic, at the Saint Rémi Church at Franc-Warret in Belgium. The instrument also has an attractive buff stop, used to good effect in the FT-Minor Fugue. Mechanical noises are minimal—a virtue, no doubt, of using a modern instrument—although there are some heavy clicks at the ends of several movements.
The instrument has a clear tone and plenty of bass, which, combined with its enviable sustain, gives Frisch a great deal of interpretive flexibility. It allows her to take the AI-Major Prelude faster than any piano could manage, and without ever congesting the textures. Similarly, the FT-Minor Prelude is agile and crisp, the instrument’s weighty resonance giving way to a lighter, more nimble tone palette. Frisch often invokes a sense of stately procession, as in the E-Major and BI-Minor Preludes, the melodic lines well supported by the substantial bass. Elsewhere, that heavy bass sound becomes ominous, even oppressive, such as in the fast bass lines in CT-Major and CT-Minor Fugues. But balance between treble and bass is never compromised, and in the CT-Minor Prelude, where the two diverge towards the registral extremes, the conversation between them never lurches too far one way or the other.
Frisch applies a subtle rubato to many of the movements. Gently accelerating into the F-Minor Fugue allows it to build pace in line with its expanding texture. The FT-Major Prelude is given a nonchalant air through seemingly casual, if always miniscule, tempo changes. And, while no arpeggiation is applied, the way that Frisch relaxes the synchronization in the EI-Major Prelude affords the individual lines greater independence, and the overall texture greater breadth, but never at the expense of clarity.
The engineering is excellent, detailed and immediate, but with plenty of the warm resonance in the mix. Each prelude and each fugue is tracked separately. Documentation, as mentioned, is a little lacking with regard to the interpretation and the instrument, but otherwise a very attractive proposition. Book II awaits.