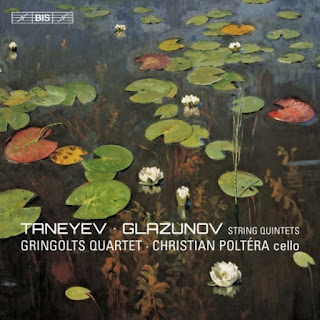 
Sergei Taneyev and Alexander Galzunov both live up to their reputations in these string quintets. Taneyev’s G Major (his First String Quintet, the Second is scored with two violas) is a terse, complex work, heavily contrapuntal and rigorously structured. Glazunov’s quintet, by contrast, is a breezy, carefree affair, elegant and varied, but in comparison to the Taneyev a work of modest ambition.
The Taneyev is in three movements, a rigorously structured sonata-allegro, a vibrant (if hardly light) scherzo and a theme and variations finale, the theme taken from Rimsky-Korsakov’s Sadko. Textures are generally thick and contrapuntal, and Taneyev regularly risks making the sound too bottom heavy, with the two cellists underpinning the melodies with continaully divergent bass lines. The Gringolts Quartet, with their celebrity guest, Christian Poltéra, give a committed account, suitably weighty but always clear. There is a tactile quality to the sound: even before the huge opening chord is voiced we hear the sound of bows rasping against strings in preparation for the huge triple (quadruple?) stopped texture. Melodic lines often float, but just as often, the tone of the instruments is earthy and focussed, the better to project the contrapuntal lines. And, for all Taneyev’s structural rigour, the ensemble is able to maintain a sense of spontaneity, perfectly timing the surprise twists, like the coda to the second movement, which seems to come out of nowhere, but concludes decisively in just a bar or two. On the other hand, the quiet ending to the work, a resigned final variation in the last movement, seems to flow organically out of the grand fugue that forms the climax – this time round the players seem to be contributing the formal logic in spite of the composer.
The Glazunov is played with similar conviction. While this is melody driven music, the accompanying textures are often highly sophisticated, and the players ensure that all the nuances are heard. In the scherzo second movement, Glazunov sets the arco melody against a lively pizzicato accompaniment, and again the clarity and projection of the playing make this unusual combination all the more compelling. The finale is a Russian folk dance, all heavy downbeats and stirring rhythms. The solid tone of the ensemble and the very definite clear-cut articulation pay dividends here; as in the Taneyev, the sheer physicality of the sound energises the music beautifully.
The two works both make occasional appearances on disc, and the competition, while select, is surprisingly strong. As with all of Taneyev’s chamber works, the main competitor is the Taneyev Quartet on a Northern Flowers reissue. Their approach is completely different to the Gringolts’. The textures are lighter and fleeter throughout, not as bottom heavy and not as intense. They too manage to project the counterpoint with clarity, but the music doesn’t feel as intense or heartfelt. It’s a different approach, no doubt just as valid, but, for me, the Gringolts give the more compelling account.
Top choice for the Glazunov is a Nash Ensemble release, where it is coupled with Arensky and Borodin. Again, the Gringolts give a heavier account, but here lightness is more of a virtue, and the melodic grace of the Nash Ensemble version sets it apart. The nimble pizzicato in the second movement is mesmerising in the Nash account, and the Gringolts seem earthbound by comparison. That said, the Gringolts have the upper hand in the finale, demonstrating that their weighty tone need not hinder the music’s dance spirit. All three recordings are well worth hearing, and this new disc is recommended, primarily for the Taneyev (by far the more interesting work), but perhaps as a supplement rather than a replacement for the venerable Taneyev Quartet account.
No comments: 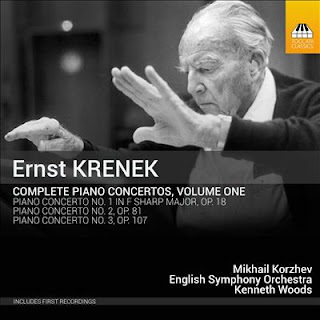 
Yet another fascinating discovery from Toccata Classics. Ernst Krenek’s limited profile today rests largely on his operas, but these piano concertos present another side to the composer. The first three, programmed here as volume one of a complete set, span the years 1923 to 1946. The first is tonal and Romantic in spirit, although with many sections of dense chromaticism, while the Second and Third are serial. Yet there are as many similarities as differences, particularly in the flowing piano lines and the colourful orchestration, but also the relaxed approach to form and the space Krenek always gives for the often complex relationships between piano and orchestra to play out.
The First Concerto was written in 1923. The composer was then in his early 20s, but this is far from juvenilia. A small orchestra is used, but to impressive effect, especially the lone trumpet, whose interjections are a defining character of the piece. Connections with Krenek’s later serialism are suggested by the couplings, and come through most strongly in the long and winding, but always clearly focussed, phrase shapes, especially in the orchestra. Krenek takes many aspects of the concerto genre for granted. He has little interest, for example, in grand opening statements of conclusive finales, and both of the first two concertos open and close quietly. And the solo writing, while clearly virtuosic, never sets the pianist strongly apart from the ensemble. My only complaint about the First Concerto is the insistent dance rhythm throughout the finale, which outstays its welcome. But if it worked for Tchaikovsky, then why not Krenek?
Peter Tregear, in his excellent liner note (one of three – stimulating contributions are also offered from conductor and pianist) describes the Second Concerto as Bergian, an apt comparison for a work that adheres to serial technique but without ever seeming insistently or antagonistically modern. That said, Krenek’s approach here was apparently in deliberate opposition to the growing Nazi influence on the arts: It proved to be his last work before leaving Germany for America, where he spent the rest of his life.
The Third Concerto was commissioned by Dimitri Mitropoulos, who gave the premiere with the Minneapolis Symphony Orchestra, directing from the piano. It’s a shorter and terser work, with a more extrovert solo part. The ominous piano left-hand rumblings with Shostakovich-like horn calls at the opening set the tone. Later we hear some surprising percussion interjections – the snare drum in particular suggesting some narrative subtext beneath this otherwise rigorously abstract music, and the sound of the pianist brushing the strings under the lid adds to the already broad palette of orchestral colours.
The performances do full justice to the music. Pianist Mikhail Korzhev is able to make even the most knotty of Krenek’s serial textures flow naturally. His tone is warm, and his phrasing ideally focussed. The orchestra copes well with what must be an unfamiliar idiom. A little more character to the string tone might have made this music sound more symphonic, but the playing can never be faulted for accuracy or balance. Ken Woods leads vibrant readings, suitably broad in the First Concerto and suitably atmospheric in the Second. The Third Concerto includes some surprising tempo shifts, often mid-way through phrases, but again, conductor and players always make the results sound natural.
Sound quality is good. The piano sounds a little constricted, while some of the orchestral sections seem curiously highlighted, the results sometimes a little unnatural, but if this is the price for such fine balance between piano and orchestra, so be it. Smart packaging from Toccata, with photos of all concerned, and the cover image, of Krenek conducting, also printed on the disc itself – a nice touch. The contents of volume two seem a little unclear – there is only one more piano concerto, the Fourth, but also a Double Concerto, for violin and piano, which would be a logical choice. Whichever way, that second volume should be worth looking out for, as is this first. Recommended, in the hope that Krenek’s concert music finds the audience it deserves outside of the ranks of modern music historians.
No comments: