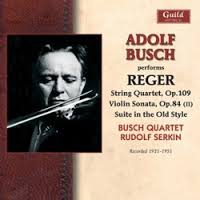 Adolf Busch was a close friend and important advocate of Max Reger, so it is frustrating how little of Reger’s music Busch recorded. But it is all included on this disc, and it makes for fascinating listening. The String Quartet No. 4, op. 109, with the Busch Quartet, is the main offering, but we also have the Suite in Old Style, op. 93, and a movement of the Fifth Violin Sonata, op. 84, both accompanied by Rudolf Serkin, another important Reger advocate in the decades following the composer’s death.
The personal connection between violinist and composer suggests that these recordings may offer an insight into how Reger himself expected his music to be played. But the issue is complex. Reger wrote the sort of expressive, late Romantic music that requires deep, personal expression in performance. Yet the composer himself, seemingly untrusting of his interpreters, wrote highly detailed performance directions, so detailed, in fact, that the differences between one performance and another usually come down to which of the dynamics, articulations, or tempo changes one or other performer has chosen to ignore. From that perspective, the most significant aspect of the Busch Quartet’s reading of op. 109 is their fidelity to the score’s directions. This is particularly notable with the tempo changes: Reger gives a rit. at the end of almost every phrase, followed by a tempo or a new tempo at the start of the next, so the fidelity of the Busch Quartet never risks monotony. They sometimes feel a little restrained, though, and on these occasions it is a question of degree. An ascending crescendo figure appears several times in the Larghetto third movement, the first time at bar 23, with the direction quasi un poco più mosso. This figure sounds quite stately here, but in modern recordings it really takes off, though the unusual reticence of the performance direction gives scope for both approaches.
The other major difference between this and more recent recordings (Philharmonia Quartet Berlin, Naxos 8.554510; Vogler Quartet, Nimbus 5644; Mannheim Quartet, MDG 3360713) is the slower tempos. Again, Reger gives license here, with a metronome range indicated for each movement. Movements are almost always longer than in modern recordings, though in the first, second, and fourth usually only by seconds. The Larghetto, however, at 12:43, is minutes longer, creating a completely different effect. Again, the Busch Quartet seems to be following the letter of the score, and their tempo is within the eighth note=52–56 prescribed. But they have some trouble maintaining the tone in the long phrases at this speed, and Reger’s always indicated rits at the ends of phrases are often accompanied by a falling away of tone. Modern performances create a greater sense of unity here through faster tempos, and more sense of shape through emphasizing those quasi un poco più mosso outbursts.
The Suite in Old Style is more successful. “Old Style” here refers more to the forms than the aesthetic, with Bachian counterpoint underpinning high Romantic textures. Busch and Serkin are in their element, and the violinist’s rich tone in the lower register is particularly satisfying in the Fugue finale. Surprisingly, this work has had few modern recordings, with usually only the Largo second movement appearing on recital discs. The only other complete recording currently available seems to be the one from Szymon Krzeszowiec and Niklas Sivelov on DUX 0840, although Reger’s later orchestral version is more popular on disc.
Two “bonus tracks” are included, from the Wendling Quartet. Karl Wendling was a violinist of the generation before Busch and another close associate of Reger. He was the dedicatee of Reger’s Clarinet Quintet, making this recording of the work’s second movement historically significant. In fact, it is not a very exciting reading. It seems more austere than on more recent recordings, although this is probably due to the 1929 sound obstructing the clarinet tone (generally, though, the sound quality on these transfers is excellent for their age). More interesting is the Wendling Quartet recording of the second movement of the op. 109 Quartet, recorded 17 years earlier than the Busch Quartet version. Technically, it is superior, and the comparison highlights some shaky intonation from Adolf Busch and some suspect ensemble from his colleagues. But the Wendling Quartet takes liberties with the score that Busch would never dream of, holding accented notes for greater emphasis and applying tempo changes where none are marked, most notably with the pizzicato cello bass line before figure 10, which is taken much slower. The op. 109 String Quartet is well served today by several fine recordings (the Mannheim Quartet’s MDG version is the pick of them), but they generally present a consensus on interpretive matters that clearly had yet to be reached in the early part of the 20th century.