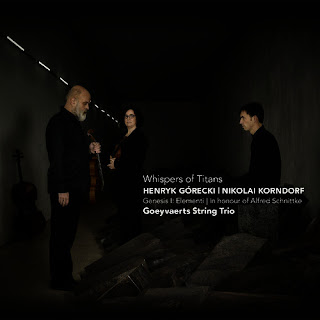 
Even by the Goeyvaerts String Trio’s standards these are uncompromising works. Their previous releases have focused on string trios by the Second Viennese School and by religious minimalist composers, and their interpretations have emphasized focus and intensity. Both Górecki and Korndorf benefit from this approach: there is nothing decorative about either of their scores presented here, and the interpretation really feels like it is getting to the heart of the music. It is not an easy ride, but the Goeyvaerts ensure it is a rewarding journey.
Górecki’s Elementi dates from 1962, early in his career and well before the minimalism that later made his name. The style is sonoristic, relying on tone colours produced through extended performance techniques. The score (of which a page is reproduced in the liner) occasionally specifies pitches, but not rhythms – dynamics and performance directions being of far greater importance here. This is the second commercial recording of the work, the first was made by the Silesian Quartet, probably under the composer’s supervision, but is not (I don’t think) currently available. I haven’t heard that version, but I understand, from Adrian Thomas, that the timings of this new version are closer to those specified in the score. Thomas also says that the earlier version has a ‘fierceness’ and ‘white-hot passion’, which he suggests are absent here. I think I can hear what he means, particularly in the control that the three players exercise over their sound in the new recording. The way that long glissandos are evenly paced and continuously supported, the careful gradation between different dynamic levels (even when approaching the extremes), and the care taken over balance between the parts – these are all Goeyvaerts Trio trademarks, and, to my ears, they are all benefits. It’s not the only way to play the piece, seemingly, but it’s certainly a compelling one. As an added benefit, this new version is recorded in surround sound, with the players positioned in a large triangle formation as the score stipulates. A sense of that spatial arrangement is retained, even when listening in two-channel SACD, and the exceptional sound quality too is a real benefit, especially in music like this that relies so heavily on nuances of timbre.
The Korndorf String Trio was written in honour of Alfred Schnittke, but finding actual links to Schnittke’s music in it is surprisingly difficult. Korndorf related that Schnittke’s influence went deeper than mere style, and that the older composer brought a new philosophy to late Soviet Russian music. Korndorf honours that philosophy with music that shares Schnittke’s spiritual outlook, at once modern and archaic, its style heavily influenced by medieval chant and polyphony. Schnittke’s name also appears as musical monogram, as it often does in Schnittke’s own music (hence the initials in the title). But, by 1986, when the work was written, Korndorf was some years into a style of austere minimalism, little connected with Schnittke’s music. The result is a three movement work, two slow movements surrounding a fast central section. Scordatura is used to bring the open strings of the three instruments as close as possible to the arpeggio of D Major, which is held for long stretches of the first movement. The central movement runs in continuous semiquaver figurations, initially passed between the instruments, but as the movement goes on, increasingly performed by them together in rhythmic unison.
An interesting quality of this new recording is the way that the fast central movement feels like it is unfolding at the same slow pace as the outer ones. The semiquavers are executed with such regularity, and the broad phrase shapes articulated with such clarity, especially the long hairpins, that the underlying structure becomes as prominent as the surface. As in the Górecki, the whole work here is presented with exceptional clarity of tone, balance of ensemble, and precision of intonation. This too is the second commercial recording, the first, which was released on Megadisc in 2002 (MDC 7804) features the impressive lineup of (a then very young) Patricia Kopatchinskaja, Daniel Raskin and Alexander Ivashkin. Again, there are virtues to both recordings, but in this case the new version is clearly superior. Kopatchinskaja’s folk-inflected playing suits much new music of Eastern Europe (I’m thinking of Ligeti in particular, but much else besides), but Korndorf calls for something else. He gets it here, in the greater purity of tone from all three players and that sense of focused intensity over the music’s long spans.
The liner notes are interesting and erudite – they’re by me. Actually, there is a lot of new material there about the Korndorf, based on conversations I had with the Trio’s cellist, Pieter Stas, who had put much work into deciphering the score in terms of the proportional structuring and the covert references to Schnittke, all of which I discuss. As mentioned above, the sound quality is also a major bonus, and the Korndorf benefits as much as the Górecki from the clear, involving sound – the Trio seems to sit around you, and it is easy to get subsumed into the sound, especially all those open-string D Major chords in the Korndorf.
A typically adventurous project then from the Goeyvaerts String Trio, and one that gives welcome exposure, and excellent performances, to two challenging but unjustly neglected works.