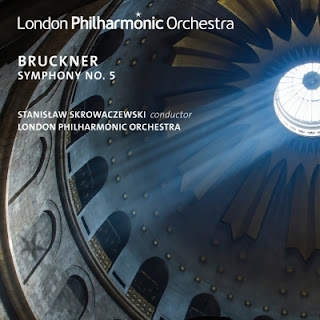 
This recording documents a very special concert. Stanisław Skrowaczewski, who had recently turned 92, brought a lifetime of experience to his performance of Bruckner’s Fifth with the London Philharmonic. I attended the concert myself, and it was an extraordinary event, not least for the many surprises in Skrowaczewski’s interpretation. But the recording is a different experience, no less valuable but just as interesting. In the concert hall, Skrowaczewski’s stage presence has a strong bearing on perceptions: We see a frail, hunched figure and inevitably contrast this against the lucidity and focus of the music-making. Listening to the recording, we can feel Skrowaczewski’s experience all the more keenly for not having to concern ourselves about how he communicates. For several reasons, this isn’t one of the greatest recordings of Bruckner’s Fifth available, but it is one of the most distinctive, and probably one of the most profound.

The blurb on the back of the box describes the reading as “an interpretation of humility,” and that idea rings true. Skrowaczewski’s most significant departure from the norm is his treatment of the chorale that dominates the finale. While he retains a feeling of transcendence here, it is always compromised, as if the religious narrative is being followed, but qualified by doubts, or by experience. He doesn’t swell through the phrases of the chorale; the brass play it straight, and slightly elide the final note of each phrase. And when the chorale is set in counterpoint to busy lines from the woodwinds, they are often given equal prominence. It is an interpretation that asks more questions than it answers, but that suggests depths of complexity to Bruckner’s theology and psychology that most conductors ignore.

Skrowaczewski also surprises in the earlier movements. While the opening movement is dynamic and never lacking pace or excitement, the caesuras he holds before climaxes are often long and unpredictable, but each feels exactly right. His phrasing is expert throughout, and the melodic elegance of the first movement is enhanced though a subtle rubato, by which the peak of a line is fractionally held, increasing intensity but without disrupting the flow. He has a good sense of line, but never subsumes individual phrases; each is given its due as a subtly distinct perspective on the bigger picture.

So too in the Adagio, a performance of great expression and often daring rubato, but no sentimentality. In the performance, Skrowaczewski moved attacca from the Adagio to the scherzo, and that is retained on the recording. Live, it was clear that Skrowaczewski kept the scherzo nimble by using only a minimum of physical gesture to convey the beat. That lightness is just as clear on the recording, where the movement is dominated by the propulsive strings rather than the brass.
For all his humility in the finale, Skrowaczewski still gives an expansive reading, at over 25 minutes. Many fascinating details come through here, especially from the woodwind. One real surprise is a flute figure 11 bars from the end, the two flutes playing legato quarter notes against the rest of the orchestra. I had never heard this before, but it fits well into Skrowaczewski’s more human-scaled account.

In the concert hall, I noticed a few moments of poor ensemble, which I attributed to lack of clarity in the conductor’s beat. Listening to the recording, the problem seems to be located almost entirely in the violin lines. There is some surprisingly scrappy playing here. Many of the violin entries are not unanimous, and there are often tuning issues when the line goes above the staff. There are also a few moments of poor ensemble from the brass, but not as serious.

Those string problems do detract, but don’t disqualify this account from high recommendation. They suggest that Skrowaczewski’s age may be finally catching up with him, but do little to blunt the originality and insight that he brings. Sound quality is impressive, clearer and more involving that on many previous LPO releases. All round, this is a unique and revelatory experience—Bruckner’s Fifth as you’ve never heard it before.