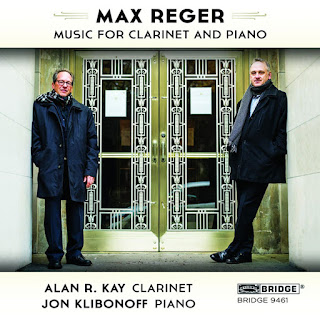 Reger’s clarinet sonatas are among his most recorded works, and the sheer range of interpretive approaches is fascinating. Reger gives detailed performance instructions—carefully assigned rits at ends of phrases, dynamic markings in almost every bar, and just as many hairpins—but he doesn’t give metronome markings. In fact, there are so many instructions, that the biggest challenge for performers is to decide which to honor and which to ignore. That has a bearing on tempos as well: At slower tempos, more of these nuances can be expressed. The problem is that Reger’s music often, and certainly in the clarinet sonatas, relies on a sense of flow, of long, unbroken phrases holding the music together. Those long phrases are fragile, and often suffer at slower tempos.

Alan R. Kay and Jon Klibonoff skillfully negotiate these paradoxes. Their readings are relatively slow, though not the slowest on disc, and generally focus on localized phrasing issues rather than the coherency of the longer spans. That results are seductive, especially in the way that each phrase is carefully and tenderly shaped. Kay takes Reger at his word, where others generalize. For example, in the First Sonata, the clarinet is often asked to enter ppp and then diminuendo through a long hairpin: We hear such details every time. Add to that a clarinet tone that is always elegant, and the results become even more appealing. Kay’s timbre is warm and round, but varied too and, like his dynamics, often reaches out to extremes, from soft, even imperceptible entries to robust, angular climaxes.
The downside is a lack of focus over the longer spans. These performances can feel slower than they actually are, for the painstaking attention paid at every point to the details of the moment. Despite his reputation to the contrary, Reger does think about the bigger picture, and each of the movements of these sonatas is subtly graded and elegantly structured. The other mark against this recording is the occasionally distant and indistinct piano tone. It is not a big problem, but it starkly contrasts the clarity and immediacy with which the clarinet is recorded.

Reger’s music is well-represented on disc, but almost exclusively on German labels. So it is interesting that the substantial discography of the clarinet sonatas includes recordings from many other European countries, as well as several from America (there is even a previous recording on Bridge, although in an arrangement for viola, performed by Barbara Westphal). That may be a result of the enthusiasm of clarinetists for the works, stylistically just a short step from the Brahms sonatas. It might also account for the diversity of interpretive approaches. Of the two other recordings in my collection, the Janet Hilton/Jakob Fichert version on Naxos (8.572173) is the least attractive. Like Kay and Klibonoff, Hilton and Fichert take slow tempos, considerably slower in fact, to fit in all the details. Just as here, those details don’t always contribute to the overall experience, and Hilton’s often harsh clarinet tone is hard on the ear. More impressive, and my recommendation for the op. 49 Sonatas Nos. 1 and 2, are Florent Héau and Patrick Zygmanowski on Zig-Zag 090303. Their reading is faster and more coherent, and, while the extremes of dynamic and tempo are leveled out a bit, you never get the feeling that you are missing out on anything. One thing you are missing out on though, is the Third Sonata, op. 107, which does not appear on the Zig-Zag release. But it’s no great loss: The work feels generic and uncommitted in comparison to the more inspired and passionate op. 49 pair.

As a bonus, Kay and Klibonoff include two elegant miniatures, the Albumblatt and the Tarantella (the Albumblatt is also included on the Héau/Zygmanowski, where, typically it is considerably faster). Opening with the Albumblatt is an excellent idea. It offers a gentle introduction before the players move on to the more serious business of the sonatas. But even when that main program begins, nothing here ever feels labored or excessive, despite with the players’ unwavering attention to detail. An attractive disc all round, and an excellent introduction to the composer’s work, especially for those who fear his dour, Teutonic reputation, which is easily forgotten when listening to these light and effortlessly melodic works.