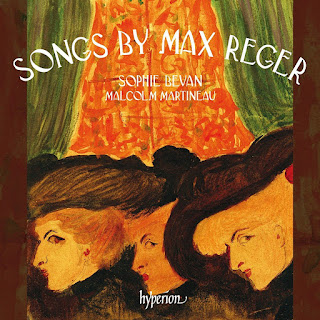 
As his anniversary year draws to a close, a disc exploring yet another huge but neglected area of Max Reger’s catalog. Reger wrote almost 300 songs, spanning his career. On the evidence of this sampling—a generous 33 Lieder on a well-filled disc—the form brought out the best in him. The composer’s sense of humor is often in evidence. There is atmosphere, and sometimes melancholy, too, but generally these follow on more from the lighter end of Schumann’s song output than from the dour offerings of Brahms.
Reger’s desire to keep up with his times is demonstrated in his choices of texts, and most of the lines set here are by poets of his era. Richard Dehmel (1863–1920), of Strauss and Schoenberg fame, is the only name familiar to me, but other poets include Anna Ritter (1865–1921), Otto Julius Bierbaum (1865–1910), Detlev von Liliencron (1844–1909), Gustav Falke (1853–1916), and Oskar Wiener (1873–1944). The mood veers between the upbeat and the dreamy, the former most often in folksong-like texts (always suitably rendered by Reger), the latter in nocturnes and lullabies, which make up a significant proportion of the program.
Soprano Sophie Bevan is a rising star in the UK, and rapidly becoming a stalwart at both the Royal Opera and ENO. While she is clearly at home on the opera stage, this is apparently her first Lieder recording, and it bodes well. Her tone is rich, her phrasing supple, and her German idiomatic. Reger always poses challenges, though, for any performer, and some of the high and loud passages, in Zwischen zwei Nächten, op. 43/1 and Wenn die Linde blüht, op. 76/4, threaten the evenness of her tone. Bevan also has occasional tuning problems in the lower register, most noticeably in Das Wölklein, op. 76/33. But in general, this music is ideal for her voice—just listen to the sheer agility that she brings to Schelmenliedchen, op. 76/36, perfect!
Malcolm Martineau is a sensitive but not unduly reticent accompanist. Typically, Reger writes piano lines that are note-heavy and often independent of the solo line, but are formulated with such skill that they never sound dense and always complement the sung line … or so they always sound under Martineau’s skilled fingers.
At present, the competition in this repertoire is slim, a recital on CPO by Iris Vermillion and Peter Stamm from 2000 (9993172) and another by Frauke May and Bernhard Renzikowski on Arte Nova (750760). Both are sung by mezzos, and the overlap with the present program is limited to a few numbers in each case. I haven’t heard the Renzikowski, but comparison between Vermillion and Bevan shows both to be fine Regerians. But Bevan is graced with better, more immediate, recorded sound (the recording was made at All Saints’ Church, East Finchley) and a more imaginative accompanist in Malcolm Martineau.
Nevertheless, both recordings are well-worth hearing, and especially the one at hand. Many labels have committed their valuable resources to Reger’s music in recent years, but none with more dedication than Hyperion. This release is as fine as any from them, well programmed and well performed, with comprehensive notes and full texts and translations. Recommended.