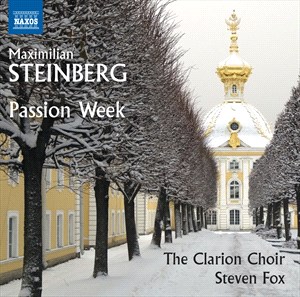 Maximilian Steinberg is a name we come across in the late biography of Rimsky-Korsakov (his teacher) and the early biography of Stravinsky (a fellow pupil). Little of his music is performed today, and, until recently, his commercial discography was limited to recordings of the first two of his four symphonies, by Neeme Järvi with the Gothenberg SO for DG. So Passion Week, a major liturgical work in the Orthodox tradition unperformed until recent times, is a significant find.
The work’s initial obscurity is perhaps unsurprising, given that it was written during the turmoil that followed the Russian Revolution (the work was completed in 1923). None of that disorder is evident in the music itself, which continues the traditions of Tchaikovsky, Rachmaninoff, and Gretchaninov; like Rachmnaninoff’s All Night Vigil, the work feels like an appendix to the great flowering of nationalist-inspired Orthodox choral writing at the end of the 19th century.
The scale of the work is comparable to the All Night Vigil, but the style is more restrained. This is very much music of contemplation, and an even pace and tone are maintained across its hour-long duration. The work moves through the story of the Passion, yet there is no sense of narrative or description here, instead somber contemplation of the events and their significance. The textures are broadly homophonic, but often anchored by held pedal notes—one effective device is the starting out of a melody and pedal on the same note, before the melody gently rises above. The movements are interspersed with appropriate Znamenny and Kievan chants, sung in unison by male or female voices.
Curiously, this is the second recording of Passion Week to appear in the last two years: The world premiere recording was made by Alexander Lingas and Cappella Romana of Portland, Oregon and released on their own label in March 2015. YouTube samples of that earlier recording are too short and too low in resolution to make a meaningful assessment, but, like this one, it is sung by a mixed choir, the choir smaller than here and the acoustic apparently more resonant.
Steven Fox and the Clarion Choir give a compelling account. Thirty-three singers are listed in the booklet, and this proves a suitable number, both in terms of tonal weight and clarity. In fact, the purity of tone is exceptional, helped by near ideal balance and intonation. The acoustic, too, of the Archdiocesan Cathedral of the Holy Trinity, New York, is well chosen and ideal for the scale of the choir and the music. A slight boxy feel is apparent in the opening solo-voice “Alleluia” (from bass Philip Cutlip), but this opens out into a warm and inviting soundscape as soon as the choir enters. Excellent sound, full texts (in Cyrillic and transliterated Russian and in English translation), and erudite liner notes from Vladimir Morosan round out an attractive and engaging recording.