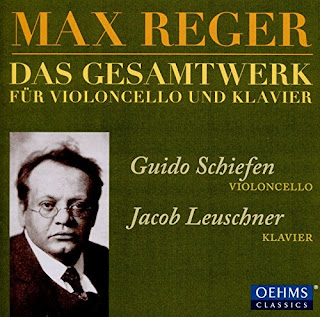 Reger’s cello sonatas are among his most demanding works, both for players and listeners, but they are some of his most rewarding too, especially when heard in performances of this standard. There is little of the neo-Baroque sensibility that characterizes his Solo Cello Suites here; instead we find a high Romantic style, with lyrical cello lines supported by terse and harmonically involved piano textures. Poor performance can make this music hard work, and the sheer complexity of the piano writing often threatens to completely subsume the cello. But not here: Cellist Guido Schiefen and pianist Jacob Leuschner give readings of clarity and textural focus, genuinely engaging from beginning to end.
The four sonatas span Reger’s short career, the First dating from 1892, the Fourth from 1910. The stylistic trajectory is from a Brahmsian early phase, through a complex and Modernistic middle period, to a more refined late style. The First Sonata is Reger’s op. 5, but his technique is already highly accomplished, and although this is more straightforward music than the later sonatas, it is still an accomplished work. Echoes of the Brahms sonatas are everywhere apparent, yet Reger is already writing denser textures than anything in Brahms, and already experimenting with the paradoxes that define his later work, the harmonic and textural ideas in the piano focusing on the moment, while long, lyrical cello lines hold the structure together.
The First Sonata is in three movements (although its duration is still substantial at around 25 minutes), but the Second establishes the four-movement form that is also common to the last two. In all three cases, the extra movement is a short and fast scherzo, a real workout for both players, although all are relatively short, in the three to four minute range. The Second Sonata, like the First and Third, lands running, with the weighty and highly involved piano textures heard from the very opening. But the Second also has many moments of calm, and the sudden sense of stillness these create is profound, like those brief moments of transcendence in Mahler symphonies that both offset and contextualize the grandeur of the tuttis around them.
The Third Sonata is probably the most daunting, in terms of its scale, harmonic and contrapuntal density, and in the technical demands it makes on the players. But again, Schiefen and Leuschner demonstrate that there is nothing to fear, that elegance and clarity are possible – and all this without diluting the sheer musical substance of this monumental work. All that density, or most of it at least, falls away in the Fourth Sonata. This work is as long as the others, and its melodic invention is no less sophisticated, but the textures are generally lighter, a fact emphasized by the solo opening, only a single phrase of unaccompanied music for the cello but a stark contrast to the turbulence that opens the previous three.
Guido Schiefen has the ideal tone for this music, plenty of breadth, but also with a tenacious, woody edge that allows him to project through the piano textures. That edge becomes even more prominent in the higher register, giving the often intensely expressive climaxes a sense of tonal focus, yet without ever turning ugly. Schiefen’s bow may have been used in the premiere of the First Sonata (it once belonged to the dedicatee, Oskar Brückner), which is about as tenuous a claim to authenticity as I’ve ever heard. But the bow, or at least the bowing, really elevates this performance, and the way that Schiefen can maintain the long lines, elegantly shaping the phrases and often adding broad swells at climaxes and at phrase endings, produces a performance fully accordant with the grand scale of the music. Accompaniment from Jacob Leuschner is equally accomplished, technically astute and with exceptional clarity of texture, for which the Oehms engineers no doubt deserve equal credit.
Many fine recordings of Reger’s music have been released in 2016 to mark the centenary of the composer’s death, but this release is the finest I’ve heard, and is definitely recommended. I’ve previously been partial to a recording of these works by AlexandreKniazev and Édouard Oganessian on Saphir 001103, but this new version is in a different league, both for performance and sound quality. The Alban Gerhardt/Marcus Becker version on Hyperion 67581/2 is much more competitive, and the two versions vie for top position. My main complaint with the Gerhardt, though, is that he intersperses the sonatas with the op. 131 Solo Suites, a jarring juxtaposition that over-emphasises the complexity of the sonatas. This new version does break the sonatas up with a few shorter works, two Caprices and two Romanzes on the first disc and an Aria on the second. All are elegant miniatures, well crafted but probably elevated here by the sheer conviction of the players. The Aria is a curiosity, a shameless pastiche on Air on a G-String. It is more often heard in the original violin and piano version, but including Reger’s own transcription here justifies the album title: Das Gesamtwerk für Violoncello und Klavier. These brief interludes apart, the album isn’t easy listening, but the sonatas are among Reger’s finest accomplishments, and these performances do them full justice.

This review appears in Fanfare magazine issue 40:3.
No comments: 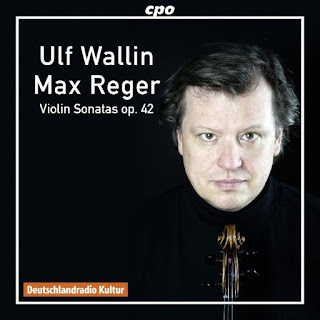 
This release completes Ulf Wallin’s survey of the violin music of Max Reger, orchestral, piano accompanied, and solo. Despite strong competition, many of these recordings are the finest available, and the sonatas (with piano) in particular deserve recommendation for the vibrancy, range of tone color, and sheer interpretive imagination that Wallin projects.
The Four Sonatas for Solo Violin are less popular than Reger’s other solo violin cycle, the Preludes and Fugues, op. 117, which are now a staple of the repertoire. Wallin speculates, in his liner note, that this is due to the greater technical challenges posed by the op. 42 set. That’s a plausible theory, as this is clearly virtuoso repertoire. Double-stopping is the rule rather than the exception throughout most of the set, often with rhythmically independent contrapuntal lines. When the music is fast, as it often is in the outer movements, Reger makes no concessions in terms of note density or detail in his articulation and bowing. And through all this, he also expects vibrancy, energy, and, lightness: the Allegro markings of the first movements are qualified energico, con grazia, and con brio.
The influence of Bach is never far from the surface, yet the music rarely feels neo-Baroque. In the later Preludes and Fugues, Reger seems more intent of inhabiting Bach’s soundworld, whereas here the influence is mostly confined to technical features. Occasionally, as in the opening of the First Sonata, we hear a gesture that could have come straight from Bach, but then in the answering phrase, where we might expect imitation then sequences, we instead hear more elaborate, and usually longer, phrase development. The implied harmonies are adventurous too, which, combined with the almost continuous multiple-stopping, creates a soundworld firmly rooted in the late-Romantic virtuoso tradition.
Wallin’s performances are, as ever, close to ideal. He brings an ideal sense of impulsive energy to the faster music, always rhythmically incisive but never weighed down by the music’s complexity or the demands of the multiple-stopping. The slow second movements all sing, and flow with a rubato that is sometimes quite extreme but that never feels indulgent. The recorded sound conveys the ambience of a resonant venue, but with the violin up-close. That can make the upper register sound abrasive at times, but hardly to a fault—this isn’t easy listening. An excellent conclusion, then, to a superlative, and to my knowledge unique, survey of Reger’s complete violin works. The works for solo violin are clearly landmarks in the history of the form, and while the Preludes and Fugues are likely to remain the more popular, for the fewer demands they make on both performer and listener, the Sonatas demonstrate a higher level of innovation and textural subtlety, all of which is compellingly conveyed here. 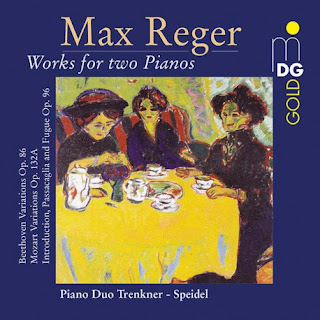 These three pieces represent Reger’s complete music for two pianos. The Mozart Variations (1915), based on the theme from the A-Major Piano Sonata, K 331, are better known in the earlier orchestral version from which Reger made the two piano arrangement. They are representative of his late style, as contrapuntal as ever, but with clearer textures and more open harmonies than in his earlier music, as represented by the other two works here. The Beethoven Variations (1904) are based on the Bagatelle, op. 119/11, and are more involved, although structural clarity is maintained through the clear contrast between each of the short movements. Typically for Reger, each set ends with a large-scale fugue, as does the third work, the Introduction, Passacaglia, and Fugue, op. 96 (1906). This piece is more in the spirit of Reger’s organ music, the counterpoint unfolding in long, flowing lines, here skillfully distributed between the two players. The liner note, by Gabriele Gafäller, tells us that the three works were among the composer’s most popular in his lifetime, a result of their accessible style, and despite the challenges they pose to the performers.
The release is a reissue, on the MDG Gold imprint, of a recording made in 1998, presumably now reappearing for the centennial anniversary of the composer’s death. Pianists Evelinde Trenker and Sontraud Speidel give attractive and unfussy performances, not overly dramatic, but with suitable contrast between the variations and excellent clarity for the contrapuntal lines. The liner says of the instrumentation “Steinway D Grand Piano from 1901,” which presumably means two such pianos of the same vintage. Technically, then, these are period instrument performances, a fact most obviously apparent at the registral extremes, with the higher notes sounding a little boxy and the bass somewhat constrained.
At least a two other versions of these works are currently available, so the choice of pianos here many be the deciding factor, for or against. But the recordings make an excellent case for the music, which, despite its initial popularity isn’t really from Reger’s top draw, or at least, it lacks the cutting-edge harmonic progressions and adventurous compositional outlook of his most interesting work. Typically for MDG, this reissue is as elegantly packaged and presented as the original. The tracking is curious; each variation set is presented as two tracks, the first with the theme and variations and the second with the fugue, though the scale of both fugues justifies the treatment. A positive notice then, but not an enthusiastic recommendation. I notice that the same duo later went on to record Reger’s arrangements of Bach’s Orchestral Suites, another interesting curiosity, no doubt, that may also be due a reissue.
No comments: