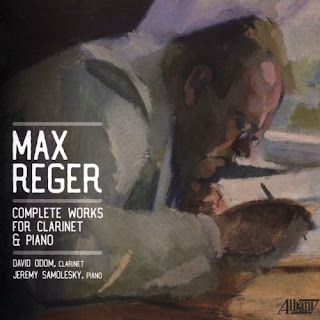 
Clarinetist David Odom and pianist Jeremy Samolesky enter what is rapidly becoming a crowded field with their new recording of the Reger clarinet sonatas. ArkivMusic lists eight recordings of the First Sonata, four of which from the last two years. The composer’s centenary celebrations may have contributed, but an equally significant factor seems to be the discovery of this music by American clarinetists, or perhaps newfound opportunities they have for recording them.
This new version is close in spirit, and in duration, to the Alan R. Kay/Jon Klibonoff recording on Bridge (9461), which was the subject of a Fanfare interview in 40:2. Kay and Odom both opt for slow tempos. Kay explained in the interview that he was following Reger’s tempo markings, and that the tendency for faster readings is a result of Reger’s long phrases and the difficulty of supporting the line. Odom and Samolesky are presumably also faithful to Reger, and their versions are slower still, though not by much, around a minute in each sonata. Even so, this makes them, I think, the slowest on record, with the notable exception of the glacial Janet Hill and Jakob Fichert on Naxos 8.572173.
The best of these new readings comes in the slow music, and David Odom finds valuable breadth in his slower tempos, always able to sustain the line and, with Samolesky, create a warm and luxuriant atmosphere. It is occasionally too luxuriant though, and the sense of direction (always there in Reger, whatever his detractors say) requires greater concentration from the listener to follow. The faster music is less successful. Phrases are not shaped adequately, and cadences lack urgency.
The sound quality is good, but not exceptional. The piano sounds recessed, giving it a rounded sonic profile: good for atmosphere, but poor on detail. Odom has a beautifully rich tone in the lower register, which the audio picks up well, but a thinner tone at the top, for which the recording does no favors at all.
The most radical aspect of this recording is the running order, with the Third Sonata, op. 107, placed first. That is a great idea, and a daring one too. The Third is less immediately attractive than either of the first two, and it takes longer to warm too. It is in Reger’s late, more harmonically direct, style, but expressively it is the most complex of the series. It usually languishes in third place on disc (apart from on the otherwise excellent Florent Héau/Patrick Zyganowski recording, Zig-Zag 090303, which omits it altogether) and so the listener is obliged to consider it an appendix to the more stylistically interconnected first two. But hearing it first gives the piece a new lease of life: Here, it is not an answer to anything, but a bold, independent statement, even if its sentiments are mostly inward looking and nostalgic.
On the subject of running orders, Odom and Samolesky don’t seem quite sure what to do with the Albumblatt and Taranetella, the two short additions required to justify the Complete Works for Clarinet & Piano of the album’s title. Placing them at the end makes them into an afterthought, an impression confirmed by the performances, which, at each around the two-minute mark, probably are the slowest on record. Sadly, that only reinforces the impression given by the whole disc of needless languor in music that, while atmospheric, often needs more impetus than it gets here.