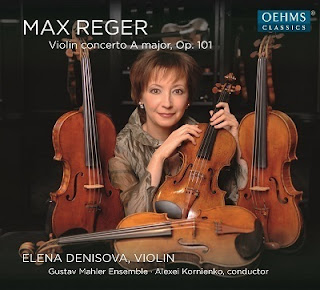 
“Reduced” versions of Reger’s Violin Concerto are becoming increasingly popular on disc, both in the chamber orchestration by Adolf Busch and, as here, the even smaller ensemble version by Rudolf Kolisch. The implicit slight against Reger’s own orchestration seems unfair—his use of orchestra isn’t the most imaginative aspect of his art, but it’s more than serviceable, and both of his concertos (this and the Piano Concerto) play out on a grand symphonic scale that only a full orchestra can convey.
The Kolisch version was intended for Schoenberg’s Society for Private Musical Performances (the two men were brothers-in-law), although the society had disbanded by the time it was complete, and the first performance took place in Vienna in 1922—this from the excellent liner notes to the present release, by Dr. Jürgen Schaarwächter. They also tell us that Reger was the most performed composer at the society’s concerts, a startling revelation, given his more recent obscurity, and the difficulty we have today in acknowledging his place in the history of Modernism. The manuscript of the Kolisch arrangement was lost after the first performance, and only came to light in 1986, among the violinist’s papers, by then at the Houghton Library of Harvard University.
In common with other SPMP arrangements, this one fills out the missing mid-range textures with piano and harmonium (the other ensemble instruments are flute, clarinet, horn, string trio, and double bass). Listening to other SPMP arrangements, those by Schoenberg himself and by Erwin Stein, one of the goals appears to have been to hide the keyboard instruments, so they offer support but only as a background presence. Kolisch is less subtle, and the piano in particular is often dominant in the textures here, especially so in the present recording, emphasizing the chamber dimensions. But the playing of the ensemble is excellent, particularly from the wind soloists: the horn becomes particularly prominent in Kolisch’s arrangement, and the round but emphatic tone of the player here is ideal.
That roundness of tone may be aided by the recorded sound, although the engineers (from ORF, who made the recording) have misjudged the resonance. Microphones seem to be placed well back in a very warm acoustic (the Nuer Saal des Kärnter Landeskonservatoriums, Austria, where the recording was made in 2003). This may be intended to compensate for the small ensemble, to give a sense of orchestral scale, but the result is a wash of sound, with much ensemble detail lost.
Even the soloist, Elena Denisova, sounds distant, although, fortunately, she has a sufficiently focused and muscular tone to maintain the necessary presence. Her sound is warm, and her phrasing generous, and my only complaint is a slight lack of security in some of the more tortuous passagework—all the notes are there, but the evenness of tone production sometimes suffers.
This recording follows another of the Kolisch transcription, from Winfried Rademacher and the Linos Ensemble (Capriccio 5137). Aside from the drier acoustic, the biggest difference is the running time, with the Rademacher at least 10 minutes longer. That difference may be due to the fact that Denisova engages the services of a conductor, Alexei Kornienko, who sculpts and propels the phrases convincingly, while the conductorless Linos Ensemble has a tendency to wallow and meander.
Both are good performances though, and, as the rendition of the solo part should be the guiding concern, there is little to separate them. That said, chamber arrangements of Reger’s orchestral works remain curiosity items at best, especially as the original version of the Violin Concerto is also well represented on disc, with Ulf Wallin (CPO 777736) and Tanja Becker-Bender (Hyperion 67892) current favorites for the top spot.