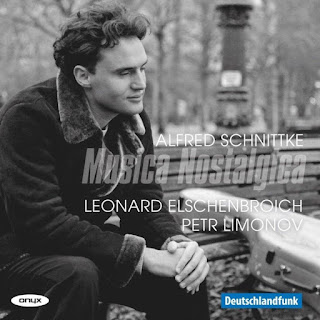 Is Schnittke’s music really nostalgic? I ask because Leonard Elschenbroich has entitled his new CD Musica Nostalgica, and the idea permeates his every interpretation. Admittedly, the title comes from one of Schnittke’s own works, which is included, but in general, the composer’s attitude to the past seems more complex than simply a lost Utopia. Elschenbroich explains in his liner note that the Russian equivalent, nostalghia, “is a feeling more painful, more severe, regarded with respectful fear.” That translates, in these readings, as a deep expressive intensity, which works well for all the chosen works. Some interpretive decisions are open to question, but the coherence and commitment that characterizes Elschenbroich’s Schnittke are not, and the results are stimulating and emotionally engaging throughout.
The First Cello Sonata begins with a simple, unaccompanied monologue for the cello, which Elschenbroich delivers in a whispered, straight tone—a beautifully eerie effect. He treats the movement as a single dramatic arc, gradually increasing the intensity, although glossing over some of the moments of repose in the process. The same is true of the moto perpetuo second movement. Again, Elschenbroich begins at a whisper, and the sudden left-hand interjections from pianist Petr Limonov are spectacularly powerful. Both cello and piano are well recorded, with the bass of both instruments particularly intense, giving a real sense of presence to these dramatic moments. But, again, the contrasts towards the end of the second movement are downplayed to emphasize the gradually building intensity: It’s a legitimate approach, but not the last word. Speaking of last words, the obbligato figure at the top of the piano at the end of the third movement is played with a wistful rubato that completely changes the effect—that feeling of nostalgia creeping in again.
Suite in the Old Style is presented in nostalgic terms too. This is Schnittke at his most Neoclassical, but Elschenbroich and Limonov take a more Romantic than Classical approach. The first movement Pastorale is marked Moderato, but is here presented at a very stately pace, with much expressive rubato. So too the “Pantomime” finale, again at a slower pace than the Andantino marking suggests. But it is not all sentimental indulgence, and the one discord in the work, a double-stopped semitone clash held for nine bars, is presented with real menace.
The Madrigal in Memoriam Oleg Kagan is a rarity on disc, at least in the cello version (it was originally for violin, naturally), making Elschenbroich’s reading all the more valuable. This is another heart-on-sleeve account, and one that makes no concessions in terms of drama and intensity for the music’s apparent lack of substance—just two pages of unaccompanied cello music, none particularly virtuosic. But, as in the sonata, Elschenbroich makes a real statement out of every note, fully exploiting the wide-ranging dynamic markings for his expressive ends. It’s the highlight of the disc.
Musica Nostalgica may seem like overkill, given that it is derived directly from the Minuet movement of Suite in the Old Style, heard just a few minutes earlier. But Schnittke takes the music in a different direction, adding queasy glissandos to the cello part and making the previously unambiguous major tonality a little more complex.
The program ends with Elschenbroich’s own Shards of Alfred Schnittke, a pastiche of several of the works already heard. We hear the Neoclassicism of Suite in the Old Style, the moto perpetuo of the sonata’s second movement, and the high piano obbligato of the third, all mixed together into the kind of the nebulously structured homage that Schnittke himself often wrote on the music of earlier composers. But, again, there is more nostalgia here than Schnittke would have brought to such a project, at least in Elschenbroich and Limonov’s wistful, emotive reading.
An impressive album, then of Schnittke’s cello works. With the exceptions of Madrigal (currently only available on one other recording, from Torleif Thedéen on BIS) and Elschenbroich’s own piece, all are well represented on disc. But these are distinctive readings, deeply expressive and with often surprising dramatic impact. That impact is also aided by the audio quality, which is excellent throughout. There are enough cello works by Schnittke to fill another disc, so a second visit by Elschenbroich to this composer’s work would be welcome indeed.