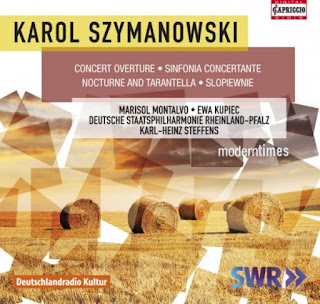 
This is a fascinating disc of Szymanowski rarities—early, middle, and late. It is part of an adventurous series from Karl-Heinz Steffens and the Deutsche Staatsphilharmonie Rheinland-Pfalz entitled Modern Times, also including releases of similarly obscure Zimmermann, Dallapiccola, Dutilleux, and Ginastera. The aim with this Szymanowski release seems to be to fill in gaps (though none are recording premieres) in a discography heavily weighted towards violin concertos and chamber works. In their absence, we instead hear the progression of Szymanowski’s artistic outlook, from the Romantic but undistinguished Concert Overture, through the Impressionistic song cycle Slopiewnie, to the relative austerity of his late style in the Sinfonia Concertante (a.k.a. Symphony No. 4).
The Concert Overture was apparently intended as an act of musical provocation against the stuffy Polish musical establishment when it was premiered in 1906, the composer then 23 years old. But its radicalism is difficult to perceive from a century’s distance. The informative, if esoterically translated, liner notes by Christian Heindl point out that Strauss’s tone poems are a strong influence. To these British ears, the work sounds surprisingly like Elgar, although the undoubted influence of early Strauss on both composers may be the link. An elegant and energetic work though, proficiently orchestrated. It certainly deserves a place at the top of occasional concert program today.
The song cycle Slopiewnie (op. 46bis) dates from 1921, and Heindl attributes the significant change in the composer’s style since the overture to the privations of war. The cycle sets poems by Julian Tuwim, which take in nature imagery and magical themes (texts are included in the booklet, with German translations, but no English). The work shows some tangential folk influence, we are told from the music of the Goral people of southern Poland. The cycle originally had piano accompaniment, as is clear from the straightforward textures of the chamber orchestra (in the composer’s own setting), which still retains a prominent part for the piano. It is unusual to hear a non-Polish singer performing works with Polish texts, but American soprano Marisol Montalvo sounds suitably idiomatic (though I’m no expert) in her pronunciation, with her gamely rolled “R”s helping the lines to flow. Montalvo has an ideal tone for this harmonically advanced by texturally reserved music: She is secure in all registers, but never overly forceful, with an attractive delicacy at the top. She employs a steady and narrow vibrato which also sits well with the style of this music.
The Sinfonia Concertante is probably the most popular and often recorded work on this disc. As its dual title suggests, the concertante piano part vies for dominance with the orchestra, although it is a friendly dispute, with the two more often working in close accord. Polish pianist Ewa Kupiec makes an excellent case for the work, her playing nimble and focused but undemonstrative. It is curious to learn that the work was dedicated to Arthur Rubinstein (misspelled in the liner), a pianist whose superior technique would surely have been little taxed by the solo part. Everything in this work is about color and life, but within tight stylistic and dramatic confines, and Steffens and his orchestra give the music its due in a sprightly and engaging performance. The sound engineering does a good job of balancing the piano with the ensemble, with both always clearly heard.
The program closes with two violin and piano works arranged by the conductor (who premiered the Concert Overture as well as much else of Szymanowski) Gregor Fitelberg, Nocturne and Tarantella. The liner note describes these as encores, but they are more substantial than that suggests. Fitelberg gives more flamboyant orchestrations than the composer himself might have done, but they are attractive and colorful, and are given excellent performances here. As in previous releases on the Capriccio label, the Deutsche Staatsphilharmonie Rheinland-Pfalz comes across as a proficient and versatile ensemble, the string sound a little bland, but the technical standards impressive throughout. The recording was made in collaboration with Deutschlandradio Kultur and SWR, who were presumably responsible for the sound engineering, which does the orchestra proud.