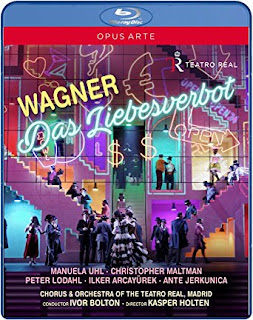 
Kasper Holten took on a formidable challenge in staging Wagner’s unloved second opera in Madrid. Das Liebesverbot, a light-hearted sex comedy (at least as presented here), was a flop at its first staging, in 1836, and although there have been several attempts in recent decades to revive its fortunes, most have reinforced the opinion that it deserves its obscurity. But Holten makes the most of this light and unassuming work, with a colorful and imaginative production. Details are added to modernize the action (there are a lot of cell phones, and Angela Merkel makes an incongruous appearance), and while these mostly fail, the gaudy carnival setting that Holten and designer Steffen Aarfing adopt suits the story, and the production makes a reasonable case for the work, only rarely stretching the drama beyond its narrow limits.
As ever, Wagner writes his own libretto, this one based on Shakespeare’s Measure for Measure. The setting is moved from Vienna to Palermo and the ban on love in the original is extended to a ban on carnival festivities as well, it being the season. Sub-plots are shorn, and we are left with a straightforward narrative: Claudio is imprisoned and awaiting death for transgressing the eponymous ban. His friend Luzio entreats Claudio’s sister Isabella, a nun, to plead for his life with the governor, Friedrich. Friedrich falls for Isabella, and agrees to free Claudio if she agrees to “spend a night with him,” as the booklet puts it. Isabella agrees, but then tricks Friedrich into seducing his own wife, Mariana, now disguised as Isabella. All ends well, with Isabella falling for Luzio, and Friedrich’s tyrannical rule of Sicily brought to an end by the King of Naples (that’s Merkel).
Holten and Aarfing exploit the carnival setting for a garish visual profile that makes no effort to fit into any particular era. The set is an elaborate arrangement of staircases, illuminated with neon signs for the street scenes, but accommodating alcoves and smaller spaces for prisons and private chambers as required. A conveyer is set up width ways across the stage, allowing much of the discourse that would otherwise require static singers to take place on the move, even if just walking to stay still. There are a lot of projections onto the set, particularly for the cell phone element, with text messages projected, always in Spanish and without translation, although it would be difficult to get lost in this story.
The Teatro Real has assembled a strong cast, the most notable lead Christopher Maltman as the governor Friedrich (his first Wagner role, where could this lead?). Maltman has the ideal comic touch for this Pasquale-like character, and certainly looks the part in his broad-rimmed circular spectacles. Strong performances too from Peter Lodahl as Luzio and Manuela Uhl as Isabella, who between them have the major share of the singing. The only disappointment, vocally, is Ilker Arcayürek as the imprisoned Claudio. His tone is unsteady and he has a habit of sliding around between the notes. The pick of the comprimario performances is Ante Jerkunica as the police office Brighella. Holten has a lot of fun with this character: In the courtroom scene in the first act, Brighella takes charge before Friedrich arrives, and seems intoxicated with the power. Then, in the finale, when Brighella arrives to pronounce the ban on carnival, the hypocrisy is revealed by his removing his uniform to reveal his own carnival costume, a kind of neon valkyrie, all of which Jerkunica carries off beautifully, and with a fine bass voice too. Ivor Bolton leads a propulsive reading of the score, the tempos brisk but supple, and the orchestra on fine form. Some ensemble problems in the chorus are evident in the opening scene, although they make a much stronger showing in the finale.
The video direction, by János Darvas, is heavy on close-up, although it gives a good impression of the overall stage setting. The Blu-ray image and audio are excellent. Subtitles are in English, French, German, Japanese, and Korean. The staging was a co-production between the Teatro Real, the Royal Opera, and the Teatro Colon. It reaches Buenos Aires at the end of April 2017, though no London dates have yet been announced. Here’s hoping that, when it does arrive, Christopher Maltman will still be aboard.