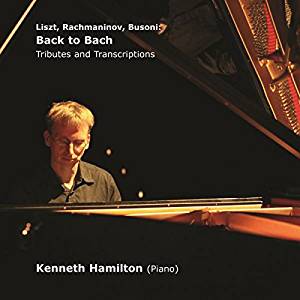 
This album of ‘tributes and transcriptions’ gives us a picture of J. S. Bach, refracted though the aesthetics of the Romantic era. Kenneth Hamilton performs Bach transcriptions by Rachmaninov and Busoni, framed by more freely inventive concert works by Liszt. The Rachmaninov, a piano arrangement of the E-Minor Violin Partita, comes closest to Bach in sound, but even here adventurous harmonies are added and textures are filled out. So the result is a programme of Romantic piano works with Bach as a background presence, and often only a distant one, especially in the Liszt.
The programme is well chosen, and three composers offering valuable contrast within the theme. In fact, the quantity of repertoire that could fit within this subject is huge, and the disc could easily have been filled with only Busoni Bach transcriptions or with variations on Baroque themes by either Liszt of Rachmaninov. But bringing them together is an excellent idea, especially for the contrast it proposes between the volcanic pianism of Liszt and the more gentle and harmonically sophisticated sound of Busoni. The Rachmaninov Suite acts as an interlude within this, lighter fare between the more substantial works. Kenneth Hamilton is a protégé of the composer and pianist Ronald Stevenson, and Stevenson’s Lisztian passion for large-scale piano transcription has clearly informed the programming here. I notice that Stevenson himself wrote a set of 18 Variations on a Bach Chorale, so I’m surprised not to find it here. Perhaps that is being saved up for volume 2.
The performances are excellent. Hamilton focuses on drama in the Liszt and atmosphere in the Busoni, while also bringing out all the details from both composers. The passagework in the Liszt is crystal clear, with astute and disciplined pedalling. The chord voicing in the Busoni is similarly refined, offering both warmth and focus.
The recorded sound is immediate and involving. The recording was made at the concert hall of the Cardiff University Music Department, a bright but usually over-resonant acoustic for solo piano, but recording engineer Philip Hardman seems to have tamed the space. The bass end of the piano sometimes sounds a little constricted, but even there the detail more than compensates.
An excellent recital, then, of Bach-inspired works, well chosen and well played throughout. Kenneth Hamilton is not yet well represented in the catalogue, although Primafacie has also released an album from him of Ronald Stevenson—entitled Volume 1, so perhaps that is where the Bach Variations will turn up. In the mean time, more Liszt and especially more Busoni from him would be very welcome.