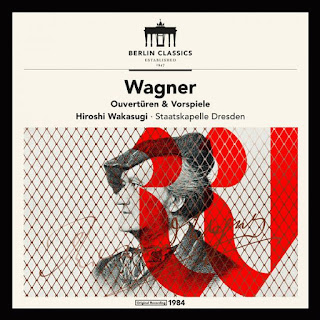 
Another disc of Wagner overtures to sit on your shelf next to Böhm, Solti, Elder, Järvi, Barenboim, Boult....In fact, Hiroshi Wakasugi need fear no comparison with any of those luminaries—his collection turns out to be up there with the best. The Dresden orchestra demonstrates, yet again, their keen sense for Wagner’s idiom, the early digital sound, from 1984, though a little dry, is clear and involving, and the conducting is expansive but with plenty of detail and rhythmic focus.
Hiroshi Wakasugi (1935–2009) was born in New York to Japanese parents. He trained in Japan, then divided his career mostly between Japan, West Germany and Switzerland. In Japan, he was known as a new music specialist, conducting the national premieres of Penderecki’s St. Luke Passion and Zimmermann’s Die Soldaten. He was also the principal conductor of the WDR SO 1977–83 and of the Zürich Tonhalle 1987–1991. As an opera conductor, he held appointments at Deutsche Oper am Rhein, New National Theater Tokyo, and with the Semperoper Dresden.
All of which suggests a conductor with a good working knowledge of the German repertoire, which this recording fully vindicates. Wakasugi generally takes slow tempos, and the soundscape always has breadth and scale. Yet he also retains a keen focus on the direction of the music, and draws strong attacks from the woodwind and brass. That, combined with the sheer quality of the orchestral playing, gives Wakasugi considerable interpretive freedom—not having to head straight into the respective operas is probably an advantage too. He takes risks, not all of which pay off. The Rienzi Overture is too slow here: The gentle introduction feels like it will never get going, and the following Allegro energico is anything but. He also sometimes pushes the brass too far, compromising their trademark tonal precision. In particular the Lohengrin act III Prelude, taken slow and with very loud brass interjections, is too much for the horn section, who audibly struggle.
The best of these performances is in the quieter music, where the strings come into their own. The Tannhäuser Overture and Lohengrin act I Prelude are both magnificent, with Wakasugi maintaining the long lines at his steady tempos—like Thielemann but without the frown. The Flying Dutchman is also given a weighty reading. The brass are more secure here, making this an ideal program opener.
The recording was made in a Dresden church, the Lukaskirche, and the resulting audio is studio quality. Berlin Classics describe this release as a 2017 remaster (by Christoph Stickel), so there may have been some modern magic worked on the tapes. The dynamic range is very wide, so don’t turn up the volume too high for the opening of Tannhäuser or you’ll be in for a shock. This is being marketed as a historic reissue, based I suspect more on the reputation of the orchestra than the conductor. Sadly, there isn’t much else from him in the catalog; he seems to mainly appear on opera selections CDs, many featuring Wagner. Still, I’d have liked to have heard a full Lohengrin from him; the Prelude here suggests he’d have done something special with it. The only other regret over this excellent release is its short running time, the premature ending emphasized by the unusually abrupt close to the Lohengrin act III Prelude. It leaves you wanting more.