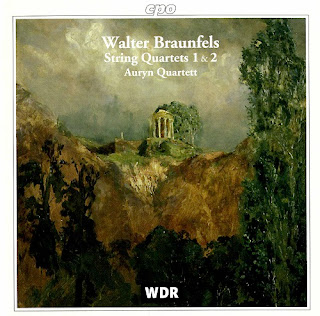 Walter Braunfels came late to the string quartet medium, and his Quartets Nos. 1 and 2 (of three) date from 1944, when he was in his early 60s. At the time, he was based in Überlingen on Lake Constance, an internal exile in Nazi Germany, having been forcibly removed from his position as director of the Cologne Academy of Music on account of his part-Jewish ancestry. Immediately after the war he was reinstated, and the two quartets were premiered in Cologne in 1946.
The light and gracefully melodic nature of this music gives little impression of the traumatic times in which it was written. Braunfels devoted much of his time in southern Germany to chamber music, and was clearly engaging with Classical-era models. The structure and scale of the two works harks back to middle-period Beethoven, as do many of the expressive features, the rigorous thematic development and the modest but proficiently voiced counterpoint. Some of the textures are more radical, especially the regular division of the quartet into two pairs of instruments in the First Quartet, and the harmony is a little more advanced as well, but, from a technical perspective, everything here speaks of a composer who came of age at the turn of the century.
The First Quartet is the more adventurous of the two in terms of mood and texture. Its subtitle, “Verkündigung” (Annunciation), refers to the opera Braunfels composed in 1933–5, from which the quartet derives most of its themes. A sense of operatic mood setting is apparent in the sprightly opening phrases, and in the third movement scherzo, where flageolet harmonics give a spectral quality to some of the later variants. The Langsam second movement is conceived on a grand, operatic scale, yet retains a sense of intimacy for the refinement of the textures and melodic language.
The Second Quartet is more Classical in conception, more upbeat for its major key and for its light bouncy textures, often with delicate melodies in the violins supported and propelled by repeated-noted figures in the cello. The middle movements of the First Quartet have German performance directions, whereas in the Second all are Italian, an indication, perhaps that Braunfels was focusing more on Classical models in the latter work.
The Auryn Quartett gives energetic and elegant readings of these two works. The unity of ensemble is impressive, especially in the passages of rhythmic unison, such as the opening of the Second Quartet. The tonal control is impressive too, although the sound sometimes takes on an abrasive edge in very loud passages, of which there are many in the First Quartet—but better that than hold back for the big climaxes. While sound is mostly rich and warm, the Adagio of the Second Quartet sounds a little thin, a consequence perhaps of Braunfels’s Classical inclinations here.
This release is not described as a first recording, but it is the only version of these quartets currently available. It is a reissue of a release from 1998: The reissue is simply a renewed distribution of the original disc in its original packaging, no doubt designed to cash in on the Braunfels revival that has recently been taking place in Germany, a canny move on the part of CPO, and fully justified, given the label’s central role in bringing it about in the first place.