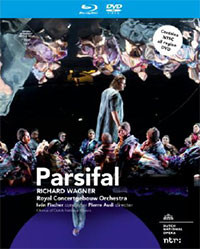 
Pierre Audi’s Parsifal was clearly a big event for Dutch National Opera when it premiered in 2012. This video was made during that first run, and its release now coincides with a revival of the production in Amsterdam, and with Audi’s departure from the company; in 2018 he takes over as artistic director of the Aix en Provence Festival.

Audi’s take on Parsifal is low key, with a minimum of stagecraft and an apparent reluctance to engage with the work’s philosophical themes. In an age when directors seem to feel duty-bound to impose contemporary themes onto Wagner, this hands-off approach feels retro, recalling Wieland Wagner in the 1950s. The abstraction is aided by the set designs, from Anish Kapoor, which are scenic for the first act but strictly geometric from then on. (The sets are very close in design to those Kapoor produced for Daniel Kramer’s Tristan at English National Opera in 2016.)

The set for the opening of the first act is a collection of what seem like rocky outcrops. When we come to the Grail Ritual, these rotate to reveal the Grail Knights on wooden scaffold platforms. The earthiness of this scenario, combined with the almost total absence of Christian symbolism, suggests a Pantheist angle. The second act is more arresting visually, with a huge reflective sphere suspended at the back of the stage. Distorted reflections follow the Flower Maidens, Parsifal, and Kundry about, and even the conductor is clearly visible, but, elegant as it is, the significance is never made clear. In the final act, a circular hole in the backdrop takes the place of the sphere, suggesting absence and emptiness at Montsalvat. And indeed the ending of this production is uncompromisingly bleak—after two and a half acts in which religious imagery has been completely absent, the Grail Knights now appear, each with a black crucifix painted on their face, and, although Parsifal accepts the spear and heals Amfortas, the assembled company all eventually wither to the ground, as if in death. It’s a curious ending, and all the more pessimistic for being the only significant directorial intervention in the entire production.

A cursory glance at the box cover suggests that the production features Klaus Florian Vogt as Parsifal, but a closer look reveals it to be Christopher Ventris. He has a weightier tone than Vogt, closer to Peter Sieffert, perhaps, whom he also resembles. Ventris is a competent Parsifal, and has the stamina to see it through, but his voice lacks the character required to make his long narrations memorable. Similarly Falk Struckmann as Gurnemanz, another dependable Wagnerian, though getting on in years, but he too has the stamina for the role. Perhaps both singers can be forgiven for not giving memorable characterizations in a production so notably low on Personenregie. That said, Petra Lang excels as Kundry, here consolidating her reputation as the Wagnerian mezzo du jour. She has an uneasy stage presence, always unsettling the quasi-mystical discourse, even when she is not involved—just the sort of singer a production like this needs. She is in fine voice too, her singing dramatically engaged and always attractive, even at her most bitter and vitriolic. Mikhail Petrenko is luxury casting for Titurel and Klingsor, though the production does little to highlight either character, with Klingsor in particular seeming like an imposter in his own castle.

The Royal Concertgebouw Orchestra has a long and proud tradition of Wagner performance, and the players’ affinity with the music is a real asset here, although this appears to the only complete performance of Parsifal the orchestra currently has in the catalog. Iván Fischer is less associated with Wagner than is his brother, Ádám, but he has an excellent feeling for the music’s drama and scale. Many conductors linger over this score, so it is refreshing to hear Fischer taking brisker tempos, and only very rarely to the detriment of the music’s atmosphere. That upbeat approach also suits the visual style, and the combined efficiency of music and spectacle affords valuable dramatic coherence.

The package includes DVD and Blu-ray discs: Sound and image are good on both, with the Blu-ray notably superior, especially in image. Microphones are positioned at the front of the stage, but so too is most of the action, so the singers rarely sound distant. The camera work mixes close-ups with wide angle, and impressively captures the scale of the second act setting. The set is released on the small Dutch label Challenge Classics, and seems to be the first and only video in the company’s catalog. But their many audio releases always have high production standards, and they have a commitment to the SACD format. Given the excellent production standards here, here’s hoping they have further collaborations with Dutch National Opera in the works.