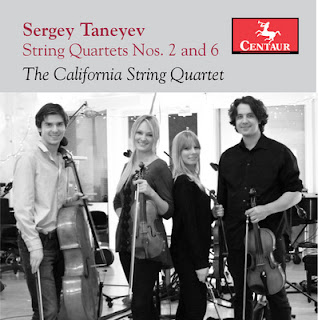 
This recording of Taneyev’s Quartets Nos. 2 and 6 comes hard on the heels of a complete cycle from the Carpe Diem String Quartet on Naxos. In fact, the California String Quartet made their recordings in 2014–15, immediately before the release of the Carpe Diem’s Sixth, which perhaps accounts for the new one being delayed until now. But it was worth the wait, as these are excellent performances, and the California String Quartet clearly has something new to say.
Prior to the Carpe Diem cycle, the only commercial recording of these works was a complete cycle by the Taneyev Quartet, recorded in Leningrad in the late 70s, and reissued on the Northern Flowers label in 2005. The Taneyevs and the Carpe Diem take contrasting approaches to the music: the former broad, expansive, and Romantic, the latter brisker and more focused. The California String Quartet sits somewhere in between, leaning closer to the Carpe Diems, but generally adopting broader tempos and a warmer tone.
All the different versions are recorded in good sound—some noise reduction on the Taneyev Quartet cycle gives an artificial rounded quality to the sound, but it’s good for its age and provenance. Taneyev’s music is often highly contrapuntal, so detail is required, especially from the viola and cello. Although the lower instruments are presented in excellent detail on the Carpe Diem release, this new version offers even greater clarity, with a wide stereo separation—viola and cello on the right—and the viola (Zach Dellinger) particularly prominent when required.
Taneyev also makes heavy demands on the violins, who are often required to play with a weighty, broad tone, even in the highest registers. The Taneyev Quartet manage this better than either of the more recent competitors, but the sweetness of tone and blend of ensemble that the California Quartet brings to the tuttis is compelling too, a more approachable and involving sound, if not quite as dramatic. The California Quartet also takes a stricter approach to phrasing than the Taneyevs, with phrase endings sometimes sounding clipped, at least by comparison. The exception is the Adagio third movement of the Second Quartet, which really benefits in the California reading from their combination of long, flowing phrases, and rich, well-sustained sonorities. The California Quartet also gives the most convincing reading of the Scherzo second movement. It’s the slowest of the three accounts, but the clean, precise textures and the incisive accents make it the most dynamic-sounding and vibrant.
The Sixth Quartet is Taneyev’s last work in the form (Nos. 7–9 predate No. 1 and were published after his death), and after the Second is the most accomplished of the cycle. Although of a similar length, it’s not as expansive or symphonic as the Second, so the California Quartet’s dynamic approach proves ideal. My generalization about tempos doesn’t hold for every movement here: Of the three accounts, the California Quartet gives the slowest accounts of the first, third, and fourth movements and the fastest of the second. In comparison to the later accounts, the Taneyev Quartet’s Adagio serioso second movement is a real outlier, a minute and a half longer than either of the others, but the California Quartet demonstrates that a brisker tempo is ideal. This movement is the highlight of the quartet, with a stately pavane-like melody over a steady walking bass, much like the passacaglia movements in many of Taneyev’s other works. It is given real shape by the California Quartet, and not just through the faster tempo, but also the more disciplined phrasing and unity of ensemble.
This new account from the California String Quartet can be easily recommended as a first choice for both works. All three accounts are worth hearing though, and the Taneyev Quartet in particular brings different qualities to the music: Taneyev balances Baroque counterpoint against Romantic expression, and while the California and Carpe Diem bring out the former, the Taneyev Quartet clearly inhabit that Russian Romanticism in a way their American successors don’t. Perhaps the California Quartet are planning a full cycle of their own, which would certainly be welcome. But even if it doesn’t happen, they have done Taneyev’s fans a favor by coupling his two finest string quartets together for the first time, and in readings that consistently match, and often exceed, the competition.