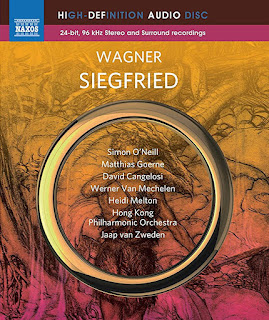 
Jaap van Zweden’s Hong Kong Ring cycle continues apace, a flagship project for Naxos and a boost too for the Hong Kong Philharmonic’s international standing. When the project was launched, with Rheingold in 2013, it was a victim of bad timing, coinciding with a far superior version, also from concert performances, from Simon Rattle and the Bavarian Radio Symphony (BR Klassik 900133). But no cycle followed from Munich, and since then, Ring recordings have been few, at least audio versions. The Naxos cycle also has an almost unique selling point of being in high-definition surround sound—in Blu-ray audio, the preferred format of Naxos over SACD—and the results fully justify the technology. The interpretation and casting are good, although neither stands comparison with the historical best, and views on the lead singers are likely to come down to personal taste.
Everything about this performance speaks of careful preparation and investment of time. German opera house orchestras have dominated the recent Ring discography, especially on DVD, but the Hong Kong Philharmonic is clearly a different ensemble. They don’t have the burnished string tone or the warmth from the woodwinds of a Central European Ensemble, though the brightness and clarity they offer instead is a bonus, even if it leads to a slight sense of detachment from the drama. The string sound, while usually secure in ensemble, can be thin, especially with the violins in the top register, leading to a transparency in the tutti textures—impressively clear but occasionally uninvolving. Zweden, for his part, gives a measured but fluid reading. Tempos are generally mid-range to slow, though he always builds impressively to climaxes. He communicates well with the singers, offering generous supporting textures, but also reigning in any rubato excesses. All round, a real ensemble performance then, meticulously prepared and well presented.
The cast is a curious mix of Wagner veterans, relatively new names, and, in the case of Matthias Goerne’s Wanderer, a Lieder singer branching out into pastures new.  In fact, Goerne has a reasonable track record with Wagner, having sung Wolfram, Amfortas, and Kurnewal onstage, but he still sounds like a Leider recitalist seeking for the vocal weight and dramatic presence required to bring the role off. His sound is more volume than heft, big on character but lacking in gravitas, and with a hazy quality that you either love or hate. His diction is excellent though, and he fits well into the ensemble. Simon O’Neill is a similar case as Siegfried. For all his undeniable musical qualities, the most apparent trait—or flaw, depending on your perspective—is his plumy English accent (though he is actually a New Zealander). He is a very lyrical Siegfried, too lyrical perhaps, as he often sounds Italianate in his rounded, florid phrasing. But he has plenty of Wagner on disc already, so buyers will know where they stand.
The rest of the cast is less controversial and generally very fine. David Cangelosi is an articulate Mime, mildly sinister and certainly not caricatured. Werner Van Mechelen is a little hollow-sounding as Alberich, but hardly to a fault. Falk Struckmann probably counts as luxury casting here as Fafner. He is not as profundo as some, but he’s still ominous. Deborah Humble has a very young-sounding voice for Erde, and struggles with some of the lower notes. She has a heavy vibrato too, that sometimes sounds labored. Brünnhilde isn’t a huge role in this opera, but Heidi Melton makes the most of it. Her tone is a little thin at the top, but all the notes are there, and she and Simon O’Neill bring the third act to a suitable passionate conclusion.
The surround sound is involving, though it does the orchestra more favors than the cast. By accident or design, the anvil in the Prelude appears at the back left of the soundstage, just as the libretto specifies. There are some thunder effects, which seem pasted on, though they probably worked better live. The timpani dominates the center channel and sounds more closely miked than most of the orchestra. The singers occasionally seem distant: Siegfried, for example, seems to begin offstage, coming towards the microphone for his first entry, and, as the Forest Bird, Valentina Farcas, seems to be positioned behind the orchestra or in some other remote spot stage left. She sings well, but the recording doesn’t do her justice. The orchestra, however, is afforded a spacious setting, all the more welcome given that most DVDs of staged Wagner operas don’t explore their surround sound capabilities for the back of the pit. The Hong Kong Cultural Centre Concert Hall seems to have a fairly dry acoustic, so there isn’t much going on in the rear speakers.
An impressive, if not exceptional, Siegfried then, from Jaap van Zweden and his Hong Kong forces.  Unless you’re a diehard Goerne fan, you’re unlikely to seek it out for the cast, but Zweden’s detailed reading, along with the quality of the orchestral playing and the audio elevate the project, and auger well for the Götterdämmerung to come.