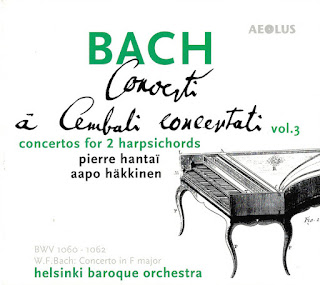 Aapo Häkkinen here completes his three-volume survey of the Bach keyboard concertos with a program dedicated to the concertos for two keyboards and orchestra. The previous volumes have garnered high praise, particularly for the clarity of execution and recording, and those virtues are again evident here. The readings are at the strict end of the period performance spectrum, but they never feel stilted, and while the standards of historical verisimilitude are high, the performances also have an engaging sense of spontaneity througout.
The Helsinki Baroque Orchestra seems a misnomer, given that it is here represented by only four members. The scholarly liner note, by Häkkinen himself, references Richard Maunder’s research to support the view that this was the size of the orchestra at the original Zimmermann Coffee House performances, and that no violone was added. But even so, this performance seems to make a particularly point of the chamber scale, with close miking, especially for the harpsichords, and the performers seated very closely together, as evidenced by a sessions photo in the liner.
The harpsichords themselves also have impeccable credentials. Häkkinen plays a copy of a Harrass instrument, the Harrass family close collaborators with Bach in his Arnstadt years. His colleague, Pierre Hantaï, plays a copy of Zacharias Hildebrandt harpsichord, thought to be close in style to the instrument Hildebrandt built to Bach’s specification for the Zimmermann performances. Both copies were built by Jürgen Ammer, who died in 2017 and to whom the recording is dedicated. Photographs of the instruments in the gatefold show sturdy, eight-legged, two-manual instruments, lacking only the elaborate frescoes under their lids.
The recorded sound favors the keyboards over the strings, with microphones attached directly to the body of each harpsichord. The harpsichords both sound rich and resonant, with the 16-foot stop of the Harrass a particular asset in the slow movement of BWV 1062. The two soloists are well separated in the stereo mix, but the surround sound brings them closer together, still distinct but requiring greater effort by the ear to pick out their individual sonorities. The strings don’t have the same level of presence or physical depth, and have presumably been suppressed to allow the harpsichord sound to shine through.
In all other respects, though, these are admirably free and flowing performances. Both soloists have a keen sense for the rubato and delay required for effective phrasing, but in most cases this is so subtle that you have to really listen to work out how it’s done. The strings are similarly vibrant, with excellent ensemble and a rich tone (despite their numbers) to support the soloists.
The W. F. Bach Concerto (without orchestra) dates from the 1730s and is therefore contemporaneous with the concertos of Bach père. The interplay between the two instruments here is simpler, but benefits equally from the clarity of the audio. Häkkinen suggests that the first movement “approaches the principles of sonata form,” but the simple interplay of solo and tutti textures points to the (also contemporaneous) Italian Concerto.
On first hearing, this disc can seem austere. The scale of the instrumentation, while historically justified, seems very small, a feeling exacerbated by the close miking and relatively dry sound. But the level of musicianship here is outstanding, and, while clarity of texture is a primary goal, the musical interest never flags. The most obvious comparison is with the recent recording from Masaaki and Masato Suzuki and Bach Collegium Japan (BIS 2051), also in excellent SACD sound. Tempos are similar, although the Suzukis are a little more strict. Conversely, the BIS recording is made in a concert hall setting and is more expansive. Häkkinen and co. have the upper hand in clarity, but only just. If I prefer the Suzuki overall, it is because the orchestra comes across better, the BIS engineers somehow finding a way to give the strings their full weight without obscuring the harpsichords. Also, the Suzukis add a violine into the mix—a bit naughty but it adds valuable weight to the tuttis.