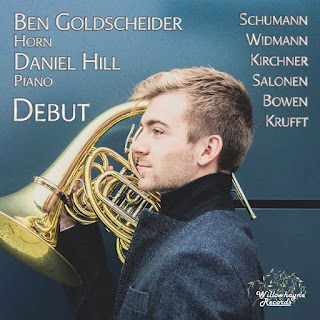 
Ben Goldscheider came to national attention in the UK as a finalist in the BBC Young Musician of the Year in 2016. He is now 20, and a student at the Barenboim-Said Academy in Berlin. This, his debut album, revisits several of the works he performed during the Young Musician heats and also includes some of the core Classical and Romantic repertoire for the instrument.
Goldscheider has an elegant tone and excellent agility for fast runs. But it is not a huge sound, the tone focused but slightly nasal. He gives the slightest hint of a slow vibrato in the Romantic repertoire, but otherwise maintains an even sound. Once or twice in this recital, there is a feeling of fatigue towards the end of long, complex phrases, but otherwise his technique is immaculate.
The program opens with Jörg Widmann’s Air for Solo Horn. Typically for Widmann, the work involves going back to the instrument’s acoustical basics, with the music growing out of an exploration of the harmonic series, and making great play out of the flattened seventh. The fast runs up and down the harmonic series are skillfully negotiated here, as are the extended techniques, which include singing into the instrument.
Following the Widmann with the Krufft Sonata is an ideal piece of programming, and the way that the Classical-era piano accompaniment emerges from the preceding sonoristic textures  makes for a dramatic transition. The Krufft is core horn repertoire, although it seems to have been commandeered by hand horn players recently, at least on disc. It is not the most exciting music, although it is far preferable to the wretched Beethoven Sonata that would have been the obvious alternative. And Goldscheider demonstrates a keen affinity for the Classical style, with beautifully shaped phrases and dramatic, but proportionate dynamic shifts.
Schumann and York Bowen follow, showing Goldscheider to be equally at home in the Romantic repertoire. My one grumble here is the recessed piano sound. Accompanist Daniel Hill, who also performed with Goldscheider in the Young Musician heats, is clearly avoiding the limelight throughout this recital, which is reasonable given its focus. But the piano is also recorded at a distance, or at least a low level, and the Bowen in particular suffers. The Kirchner work was originally a song cycle for horn, baritone, and piano based on Rilke, and the piano here plays an even more subsidiary role, often just as a resonator for the horn, who plays into the body with the dampers raised for echo effects. The overall impression of the work is of an austere, gestural Expressionism, and Goldscheider makes the most of its dramatic potential.
The recital ends as it began, with a new work for unaccompanied horn, the Concert Étude by Esa-Pekka Salonen. Goldscheider clearly feels a close affinity with this music—he played it in two rounds of the Young Musician—and it is an excellent fit for his talents. Salonen, a former horn player himself, fits a wide range of extended techniques into the short work, and the piece is particularly effective for the Klangfarbenmelodie effects achieved by successively playing the same pitch, but at different sides of the double horn, or with different hand-stopping positions. It also has that mercurial energy that underpins all of Salonen’s music, an unpredictability that sees it shooting off in different directions in almost every phrase.
A promising debut, then, and a suitably diverse programme to demonstrate what is clearly a broad and diverse talent. Detailed liner notes on the music, most by Goldscheider himself, add to the attraction, as does the generous running time.