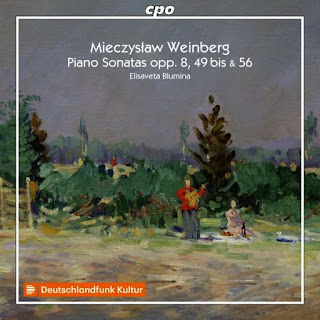 
Elisaveta Blumina here continues her project to record Weinberg’s chamber music, this her second album of solo piano works, adding to a catalog that also includes the Piano Trio, Double Bass Sonata, and a disc of woodwind sonatas. The three piano sonatas here span Weinberg’s diverse career, so there is plenty of variety. Another recording project, a complete solo piano works from Allison Brewster Franzetti on the Grand Piano label, runs to four CDs, so this constitutes about a quarter of the repertoire. The two numbered sonatas here, Nos. 2 and 4, are from a canonical six, while the op. 49bis is a reworking of earlier music into a sonata structure.
The program opens with the Second Sonata, dating from 1942, a period when Weinberg was predominantly occupied with film and television music: his famous contributions to the Russian version of Winnie the Pooh date from these years. Most discussion of Weinberg’s stylistic trajectory plots his work against the increasing influence of—or mutual influence with—Shostakovich, which is certainly apparent in the Fourth Sonata. However, the Second sounds closer to Prokofiev, especially in its percussive, toccata-like first movement. The energy and drive make for a highly engaging start to the program, and Blumina finds an ideal balance between the focussed attacks and the sonority required to maintain the long lines. With the exception of the slow third movement, most of this work plays out in two-part counterpoint between the hands, and Blumina’s clarity of texture plays dividends throughout. The Adagio third movement feels a bit too long for the work’s otherwise concise proportions, but it is beautifully structured in this performance, with Weinberg’s gradual build-up to the climax carefully paced in volume and harmonic density.
The Sonata, op. 49bis, is dated 1979 but is in fact a reworking of the Sonatina of 1951, itself an elaboration of music from Weinberg’s Childhood Notebooks, previously recorded by Blumina on CPO 777517. Despite having been twice expanded, the music retains an intimacy and appealing gentle character. Of its three movements, the first two are markedly more chordal than in the Second Sonata, while the fugal finale returns us to Weinberg’s contrapuntal tendencies, although his delicacy and charm remain, and, although the work fits squarely in Stalinist-era socialist realism aesthetics, there is never any pedantry or dryness, and the music’s simplicity works to its advantage throughout.
The Fourth Sonata, from 1955, is more serious. The notes, by Dr. Marion Méndez, describe it as the most tragic of Weinberg’s piano compositions, reflecting the composer’s grief at losing his entire family in the Holocaust. It is certainly solemn, but the music is never morose, and Weinberg always knows when to add rays of light into his otherwise melancholy moods. Like the other sonatas, it is based on simple, elegant material, although this is soon developed into more emotionally complex areas. Yet the emotion always remains understated, especially in the second movement (of four), where occasional piquant dissonances unsettle the otherwise smooth flow of the melody, and in the finale, which has a more upbeat mood, even if that is soon undermined by the sheer lightness of the textures, at least against the more weighty music of the previous movements.
Méndez tells us that Gilels recorded the work in 1960, but with much faster tempos. That recording is now available as part of Melodiya’s 50-CD Emil Gilels: 100th Anniversary Edition (1002433). Another Gilels recording (presumably), from 1957, is available on YouTube, and it is a full five minutes shorter than Blumina’s 30-minute reading here. By comparison, Gilels sounds rushed, especially in the first movement, although his tempos are supple, with plenty of restrained interludes. But Blumina’s interpretation is more convincing, not least for the directness of expression she achieves at her more measured tempos, as well as the clarity of texture and line. As in her previous Weinberg releases, the audio quality here is excellent—deriving from a co-production with Deutschlandfunk Kultur, the studio recordings made in January 2016. These aren’t the only recordings available of Weinberg’s piano sonatas, and as well as the Franzetti, there are also versions of Sonatas Nos. 2 and 4 from Murray Mclachlan on Divine Art. But, as the comparison with Gilels demonstrates, there are many ways to approach this music, and Blumina’s interpretations are convincing and compelling throughout.