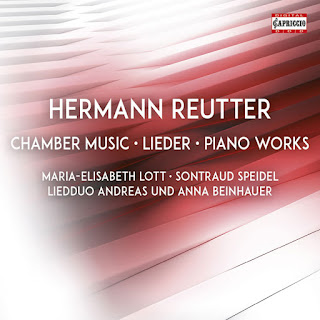 
Hermann Reutter (1900–1985) is all but forgotten today, but he was an important figure in German music before, during, and after World War II. He was born in Stuttgart, and spent much of his career as Rector of the city’s State University for Music and the Performing Arts. As well as a teacher and composer, he was active as a Lieder accompanist, and songs in the tradition of Schumann and Brahms make up a large part of his output. The singers he accompanied included Hermann Prey and Dietrich Fischer-Dieskau, and their recordings of his works make up the majority of his available catalog today. But he was prolific in a variety of genres, especially orchestral music and opera, and on the strength of this disc of songs and chamber music, there are many fine works out there awaiting rediscovery.
One possible reason for Reutter’s recent neglect was his relationship with the Nazis. He was a member of the party from 1933, but that didn’t stop some of his music from being denounced as “degenerate,” in particular his choral work Der neue Hiob, op. 37, which featured in the Düsseldorf Entartete Musik exhibition and was described by Goebbels as “horrible and unbearable.” But none of this seems to have affected his career, which spanned the 20th century, as demonstrated here with works ranging from 1926 (the Violin Sonata) to 1979 (Epitaph for Ophelia).
By post-war standards, Reutter’s music is conservative, but he has a distinctive voice, combining Romantic and Modernist influences. The two song cycles here, both from the war years, are in a German Romantic vein, the textures more open than Pfitzner or Reger, but otherwise of that school. The two violin works are more progressive, with the early Violin Sonata in particular showing influence from Bartók and Stravinsky. The bare, open octaves that open the work almost sound like Ligeti, although the music soon settles into a more melodic style, albeit always angular and cleanly delineated. The Dance Suite was written in 1928 to a commission from Schott (the publisher was loyal to the composer throughout his life, and remains so today). They are pedagogical piano works, but with a twist, designed to introduce young players to modern styles. So the dance movements include a “Valse Boston” and a “Shimmy.” Unfortunately, the music here is surprisingly derivative, those two movements closely resembling Debussy’s “Voiles” and “Golliwog’s Cakewalk” respectively, and the preceding “Spanischer Tanz” almost a pastiche on Chopin.
But elsewhere the music is more distinctive. The Epitaph for Ophelia is a freely ranging discourse on grief and despair. It is written for violin and piano (arranged from a chamber orchestra accompaniment), but for much of the work the violin plays alone, and the results are intimate and elegiac. In the song cycles, too, Reutter is clearly in his element. His experience as an accompanist shows in the restrained but effective colors and textures of the piano parts, and the vocal lines are all carefully but naturally calibrated to the cadence of the words, by Rückert and Hölderlin.
Texts and translations are included, but even listeners with only a basic grasp of German are likely to pick up much of the text, such is the clarity of the settings and the elegance of the presentation. Baritone Andreas Beinhauer is ideal for this music, clear, rich, and emotive; a worthy successor to Fischer-Dieskau who previously popularized this music. Violinist Maria-Elisabeth Lott also excels, her sound tactile and immediate in the sonata, but floating and ethereal in the Epitaph. Good pianists too, although Reutter’s reticence in his piano writing means that both have to make much out of often spare textures. The warm soundscape helps, in well-engineered studio recordings.
Another engaging and adventurous release, then, from the Capriccio label, and a tantalizing glimpse of a huge catalog as yet to be explored.

This review appears in Fanfare magazine, issue 41:6.
No comments: 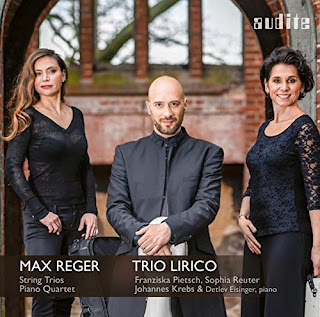 
These three works all bring out Reger’s Mozartian sensibilities. The textures are clear and the movements are well structured and well proportioned. Yet there is little sense of Neoclassical restraint here: The music is passionate and often intense. The op. 77b String Trio dates from 1904, during Reger’s Munich years, his most progressive and experimental phase. But writing for just three instruments brought a clarity and focus to his music that was often lacking in his larger projects of the time. The op. 141b String Trio and the op. 133 Piano Quartet date from 1915 and 1914 respectively, towards the end of Reger’s short life, when he had retreated to Jena and resolved to write music to his own taste, rather than compete with the fashions of the day. So there is directness and simplicity here too, along with a good helping of the sophisticated harmony and intricate counterpoint that we find in almost all his music.
The German ensemble Trio Lirico do an outstanding job here, giving performances that are light and buoyant, with beautiful clarity of texture and finely gauged balance between the instruments. Focused articulation helps to propel the lines, and the viola and cello in particular often display a woody, tactile attack, while the overall tone is suitably balanced between transparency and richness. Pianist Detlev Eisinger fits perfectly into the ensemble to the Piano Quartet. In all three performances, the string players indulge in some sweeping rubato gestures in the transitions—ideal for this music—and Eisinger seems to goad them even further, into daringly broad and opulent phrasing. The gamble always pays off.
As with most of Reger’s chamber music, the competition for these three works is select but strong. And, as usual, the benchmark is the MDG series from the 1990s. The string trios there, from the Mannheimer String Quartet (MDG Gold 336 0711 and 336 0722) are weightier in tone and recorded in a warmer and more ambient setting; easier on the ear where these are more confrontational. Interpretively, they are similarly well executed and conveyed, so the two versions deserve joint top billing. But don’t miss the excellent version from the Vogl Trio on Gramola (98943). Thir approach is lighter and more conversational in the counterpoint, lacking a little in drama but still impressive.
The MDG version of the Piano Quartet, again with the Mannheimer String Quartet, with pianist Claudius Tanski (336 0714) has a compelling sense of urgency in the first movement which Trio Lirico seem to lack, at least by comparison. But the audio quality on the new version is superior, so again it’s a tie for top place. The other versions available are not competitive: The Fanny Mendelssohn String Quartet (Troubadour 1415) is rushed, while the Aperto Piano Quartet (Naxos 8.570786) lacks focus and engagement, and neither version comes close to this or the MDG for audio quality.
Generous running time and an unusually well translated booklet round out an attractive package. Just one complaint: The Audite label used to champion SACD. Their new approach seems to be to issue standard CDs, but with a high-resolution, surround-sound download equivalent. I’m sorry to have missed out on that, but it could potentially elevate this joint first into a clear winner.

This review appears in Fanfare magazine, issue 41:6.
No comments: 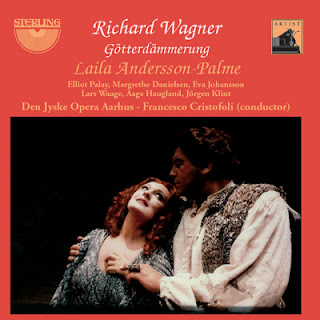 
A very serviceable Götterdämmerung, and from an unlikely source. This recording captures a staged performance of the work from Aarhus in Denmark on September 6, 1987. It’s not going to compete with the best, of course, but it offers a convincing musical interpretation and a cast that ranges from good to excellent. Mediocre recorded sound and some shaky orchestral playing stand against it, but there is much to enjoy here.
The font sizes on the cover make clear the reason for this release: soprano Laila Andersson-Palme in the role of Brünnhilde. She is not a household name outside of Denmark, but she seems to have pursued a long and successful career there, taking lead roles in everything from Handel to Berg at the Royal Opera House in Stockholm and making a specialty of Wagner. Her performance here fully justifies the attention. Her tone is clear and strong, and well balanced across all registers. Diction is good, and she imparts a dramatic urgency to every line. But most impressive is her power and support, seemingly effortless, especially in the top register. A finely controlled vibrato completes the package—a stunning voice, and she is clearly captured here at the height of her powers.
Although Andersson-Palme leads from the top, there are no really weak links in the cast. American tenor Elliot Palay brings a deep, baritonal quality to the role of Siegfried, his sound a little hollow at times, but always on pitch and always dramatically engaging. Aage Haugland is little less secure as Hagen, but the sheer weight of his voice makes him a valuable asset, especially with his memorable “Hoi-ho!”s. As Gunther, Lars Waage is a bit wobbly and Italianate, though it suits the role. The Gutrune of Eva Johansson is underpowered, or sounds so in this weighty cast, but her tone is solid and focused, as is the mezzo of Margrethe Danielsen as Waltraute, although her matronly delivery hardly suits a valkyrie.
The orchestra gets off to a shaky start, but soon find their form. A more solid string tone could have brought the orchestral contribution up to the standard of the singing, although the lower brass are suitably menacing and dark. Though his name might suggest otherwise, Francesco Cristofoli (1932–2004) was apparently a Danish conductor and Wagner specialist, and also Intendant of the Aarhus Opera at the time of this recording. The liner tells us that a full Ring cycle from him was released on VHS in 1995, though that seems to have disappeared without trace, and he is otherwise remembered for a 1960 recording of HMS Pinafore from Copenhagen. His conducting here is engaged and dramatic, and particularly impressive for his keen communication with the singers. He sometimes lets the temperature drop, and some of the orchestral interludes lack drive, but the big climaxes are always exhilarating. Cristofoli brings a sense of breadth to the music that can make it seem slow, but at 248 minutes (I didn’t spot any cuts), he’s on a par with Boulez and faster than most others.
No excuses, then, for the bizarre disc breaks, with every act divided between two discs. Disc 2 begins at act I scene 3, disc 3 at “Einen Ring sah ich an deiner Hand” in act II scene 4, and disc 4 at Siegfried’s Funeral Music. There not too generous with the cuts either, just 26 tracks across the four discs. But otherwise the production values are good. The liner notes focus on Andersson-Palme, who spends much of the included interview complaining about Regietheater—not that it is a concern in this apparently traditional staging from director Klaus Hoffmeyer. There is also a libretto included, though it is curiously herniated from the packaging, too large to fit in the box, so attached just by the shrink wrap.
This seems to have been an in-house recording, and the audio isn’t too bad. We get a wide stereo array for the voices onstage, though they are sometimes distant—as is the back of the pit, especially the timpani. There is also some stage noise, but the audience is quiet. But the audio is never so bad as to be off-putting. An interesting release, then, and an unexpected addition to the Wagner discography. Primarily worth hearing for Laila Andersson-Palme—clearly a Wagnerian of some stature.

This review appears in Fanfare magazine issue 41:6
No comments: