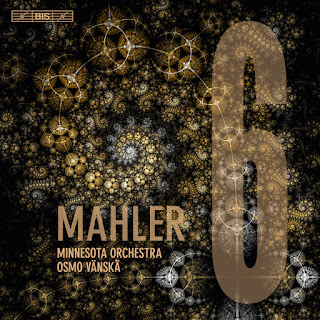 
This is the second release in Osmo Vänskä’s Mahler cycle for BIS, following a well-received Fifth Symphony last year. It’s a crowded field, of course, but Vänskä has a distinctive take. He also has the benefits of a world-class ensemble in the Minnesota Orchestra and exceptionally fine audio from BIS, both key attributes for any Mahler recording. His slow tempos won’t suit every taste though, suggesting a mixed reception.
At 86:16, this is one of the slowest versions on record—a cursory scan through the catalog brings up Rattle’s 1991 version (EMI 54047) at exactly the same timing (though with a longer first movement and shorter Finale), but most other versions at least five minutes shorter. (That timing also makes this one of the longest-running discs in the catalog too.) Mahler gives no metronome markings, but he clearly expects plenty of rubato, and Vänskä’s phrasing never feels square. The outer movements are furthest from the norm, but neither feels any more weighty or monumental for the slower speeds. Instead, Vänskä uses the space to focus on the details of counterpoint and orchestration, all of which come through with spectacular clarity. The second subject “Alma” theme of the first movement is indicated A Tempo, but here it is significantly faster than the main theme.
The inner movements are ordered Andante-Scherzo, which is my preference (and Mahler’s too, I’d tentatively argue), and both are more conventional with regard to tempos, timing in at 16:10 and 13:18 respectively. The Andante is characterized by gorgeous solos from the English and French horns, while the Scherzo has the appropriate weight, though without Vänskä really emphasizing the lower end of the orchestra.
The slow tempos of the Finale (31:42) rob the music of some urgency, but allow Vänskä to make marked contrasts between the steady primary themes and the much faster and more frenetic intervening episodes. But even right up to the end, the basic tempo remains steady, giving a greater sense of finality to the closing chords and percussion outbursts, even if the line of argument that they conclude by then seems very slender indeed.
As mentioned, the Minnesota Orchestra, playing at their best and recorded by BIS in exceptional SACD surround, makes for a superior audio experience. On my setup, the focus of the orchestral tone is weighted to the center channel—that’s where you’ll hear all of the percussion and brass (even the tuba solo) and most of the woodwind. But it’s still an immersive experience. The sheer clarity of the orchestral detail is extraordinary: Every note of the celesta part, from example, is easily audible. That alone ought to make this release recommendable, though listeners who like a bit more urgency in their Mahler should probably look elsewhere.