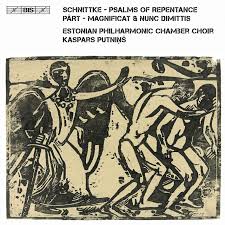 Schnittke’s Psalms of Repentance were written to commemorate the millennium of Christianity in Russia, celebrated in 1988. The work is for unaccompanied mixed chorus and sets 16th-century texts, anonymous poems on religious themes (not psalms as such, the Russian ‘Stikhi’ translates better as ‘Poems’ or ‘Verses’). Most of the texts are abstract Lenten reflections on the subject of penitence, although scenes from the Garden of Eden are evoked, and the text of the Sixth Psalm relates the fate of Boris and Gelb, the sons of Grand Prince Vladimir, who were murdered in 1015. The baptism of Vladimir in 988 is the event that the millennium celebrations commemorated, and Boris and Gelb became the first martyrs of the Russian Orthodox Church. The music has a quasi-liturgical character, drawing on the spirit and style of Orthodox music, but the harmonies are more advanced, making this a thoroughly modern setting.
This new recording from Kaspars Putniņš and the Estonian Philharmonic Chamber Choir is outstanding, and easily the best version on the market. But before continuing with my rave, I should declare an interest: I wrote the liner note, though beyond receiving a first edit prior to release I had no further involvement in the recording itself (the booklet is available online at https://www.chandos.net/chanimages/Booklets/BI2292.pdf). Putniņš takes an austere approach to the music, with most of the movements timing faster than the competition (though the differences are slight), but also shapes the music subtly around the formant and meaning of the texts. This is ideal for projecting the quasi-liturgical atmosphere—both reverent and passionate, but with emotional intensity at the climaxes, though even here the restraint is always felt. The sheer precision of the choral singing also elevates this version above the competition: The music is very hard to sing, but never seems so here.
The recording too is excellent. It was made in St. Nicholas’s Church in Tallinn, a relatively large Protestant church with a very high ceiling. The acoustic is ideal, as is demonstrated by the venue’s regular use as a concert hall. Here, it gives the choir a warmth but without detracting from the detail of the harmonic voicing (there is little counterpoint). BIS provides surround sound that is more interrogative than immersing, but this complements the warmth of the choir, and the results never feel dry.
This is now the fifth commercial recording of Psalms of Repentance. The premiere recording was made by Stefan Parkman and the Danish National Radio Choir in 1996 (CHANDOS 9480). I haven’t heard that, but it was well received at the time. Next came the Swedish Radio Choir under Tõnu Kaljuste (ECM 453 513-2), until now my preferred version. Kaljuste is more expansive than Putniņš, balancing the singing more towards expression than devotion. But Putniņš shows that the music can be just as effective within narrower interpretive constraints, and also has the key advantages of better singing and better audio. Since Kaljuste, two German radio choirs have recorded the work: the SWR Vokalensemble Stuttgart under Marcus Creed (Hänssler 93.281—like this, in SACD) and the RIAS Kammerchor under Hans-Christoph Rademann (Harmonia Mundi 902225). Neither choir gets to the Slavic heart of the music the way that the Swedes and the Estonians do, nor are either of these choirs as well disciplined. (As an aside, Rademann writes in his notes that the performance directions in the published score, the breaths, dynamics, and articulations, are editorial: They were added by Viktor Suslin at the behest of the publishers. So Rademann ignores these, interpreting the work more intuitively. The result is a greater sense of continuity, with few sudden dynamic changes, but the differences are very slight.)
Putniņš has an additional advantage in recording the work in a church acoustic, where all the other versions are made in studios with digital reverb added. The reverb on the SWR recording is particularly detrimental, but none of the other versions I’ve heard give the natural warmth afforded by Tallinn church.
As a filler, Putniņš includes the Magnificat and Nunc dimittis by Arvo Pärt. This is simpler and more consonant music than Schnittke’s, but it fits the mood of the Psalms of Repentance perfectly. Schnittke’s final movement is a wordless bocca chiusa lament—a beautifully atmospheric ending and a very hard act to follow. Pärt’s straightforward textures don’t really compete, instead bringing the listener gently back down to Earth. An excellent recording, then, and for the foreseeable future the clear favorite for Schnittke’s masterly setting.