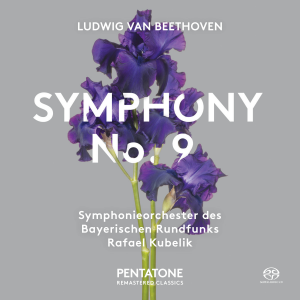 
Rafael Kubelík famously made a complete Beethoven symphony cycle with a different orchestra for each symphony, but for the Ninth he returned to his home base, the Bavarian Radio Symphony Orchestra in Munich. By 1975, when this recording was made, he had been the orchestra’s chief conductor for 14 years, and that close relationship is clearly apparent here. Kubelík leads a dynamic but majestic account, old-fashioned perhaps, but compelling on its own terms.
Kubelík never lets a phrase go by without inputting some subtle nuance of phrasing. Yet the results never feel micromanaged or overly detailed. Instead, each movement flows as a single paragraph of music. There is plenty of drama too, the climaxes thundering, and no less emphatic for their careful preparation. The slow movement is classic Kubelík, deeply Romantic and carried by the long melodic lines, again always carefully shaped, but without impeding the music’s natural flow.
Things come slightly unstuck in the finale. In the earlier movements, the controlled but charatcterful woodwind is a defining feature of the orchestral profile. But Kubelík pushes the players too hard at the opening of the finale, and the clarinets play sharp. Soloists and chorus all sing well, but  Kubelík’s pacing in the last few minutes lacks the intuitive logic that he applies earlier on, with problematic tempo shifts between sections and hesitant delays before the final choral entries breaking up the flow of the music. For a few moments, Beethoven’s tenuous formal logic seems to get the better of him, a surprise given Kubelík’s usual gift for making less coherent works sound perfectly proportioned—just think of his early Dvořák symphonies, and especially his recording of Pfitzner’s Palestrina.
Two other recordings of Kubelík conducting Beethoven’s Ninth have also been reissued in recent years, another with the BRSO on Orfeo and one with the New Philharmonia on BBC Legends. The version at hand was made for Deutsche Grammophon, who have released it several times, in 1999 as part of a two-disc set with Nos. 7 and 8, and more recently in box sets of the complete Beethoven symphonies and of the complete Kubelík DG recordings. This new release from Pentatone is significant because it offers the original four-channel quadraphonic sound. The sound is spectacular, and well worth Pentatone’s efforts, which apparently involved sourcing the original tapes and remastering them with the help of the original sound engineers.
Four channels rendered into SACD surround means that the center channel is engaged but silent. The rear channels carry more of the orchestral sound than in modern surround recordings. Even so, the audio profile places the listener well in front of the orchestra, and not within it. My rear speakers are too small to do the recording full justice, but even on a home cinema surround setup, the benefits of the quad audio are clear. The placement of the orchestral sections is particularly detailed, with the timpani often dominating the front right speaker, but never obscuring any of the other sections. For some reason, the chorus is very recessed, and the engineers have made little effort to bring them into the surround environment. The soloists are closer though, and are well balanced and naturally recorded.
This is the 25th release in Pentatone’s Remastered Classics series of 70s quad recordings on SACD, with previous releases including most of the Kubelík Beethoven cycle—only the “Eroica” is currently missing. No doubt the experimental nature of the original recording project led to variable results, but on the strength of this release there is much potential here for today’s audiophile listeners. Recommended, then, for some classic Kubelík Beethoven, especially in the adagio, and for the excellent audio—not something I would expect to be writing about a recording made in 1975.