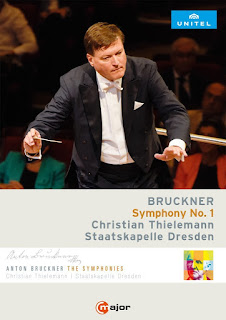 
Christian Thielemann has long been associated with Bruckner, and his current discography includes 25 recordings of Bruckner symphonies, with various orchestras and labels. But up until now he has avoided the earlier symphonies, with only a single recent account of the Third, and none for the four that precede it. Unlike his previous Bruckner recordings with the Munich Philharmonic, this set with the Staatskapelle Dresden is shaping up to be a complete set, so the time has come to address these early scores.
If you have been following this cycle, which now includes Symphonies Nos. 1, 4, 5, 8, and 9, you’ll know what to expect. The Dresden orchestra performs in an ideal eastern German style, with nasal horns and a woody but resonant woodwind tone, all over a lush but timbrally complex bed of strings. Thielemann conducts from memory, and looks completely obsessed with the music. He conducts with small, emphatic gestures, with glancing cues and few downbeats. Even so, there is never any doubt that he is in complete control.
The camerawork is mobile, with close-ups of the soloists—the excellent first horn gets a starring role—and plenty of Thielemann himself. The recording was made live at the Gasteig in Munich, not as picturesque a venue as their home at the Semperoper, used in previous installments, but it offers good sightlines and the audio is excellent.
My only complaint is with Thielemann’s approach, which is grand and imposing, on the same scale as his readings of the later symphonies. The First Symphony isn’t a small-scale work, but it is more modest than the Seventh or Eighth, and while it shares their style of symphonic discourse, it needs a lighter touch. Thielemann’s heavy and overtly symphonic approach works well in some passages, particularly in the Scherzo, which has real punch, and much of the Finale, but elsewhere feels overblown. The Adagio in particular is too emphatic, too architectural and lacking in melodic flow—when the camera turns to Thielemann’s face, his stern expression and furrowed brow seem to be etched on to the music.
But this is how Thielemann always approaches Bruckner, and everything else, so it shouldn’t come as a surprise. Just one last grumble: If Thielemann is going to take this approach to the First Symphony, then why not use the Vienna version? For the revisionist school of Bruckner performance, the conductors who favor fleet tempos and light textures—Schaller, Janowski, Venzago—the Linz version of the symphony makes perfect sense, but the more polished and cosmopolitan later version would seem a better fit for Thielemann’s approach. The musical world still hasn’t forgiven Bruckner for setting aside his Ninth Symphony to revisit the First, so his final version seems destined to remain a rarity on disc.