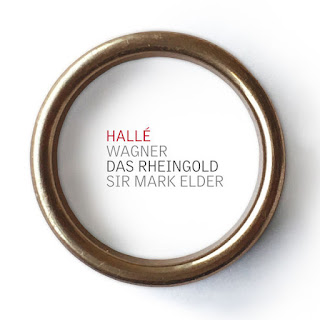 
When Mark Elder gave a concert performance of Götterdämmerung in 2009 with the Hallé, he was non-committal about the idea of a full Ring cycle. When interviewers pressed him, he would emphasise just how much work the final part of the cycle was for the orchestra, with far more preparation required than a standard subscription concert (though it was spread out over two evenings). But the whole enterprise was such a success that the full cycle did in fact take place, with each instalment later appearing on the Hallé’s own label: This Rheingold has been released to coincide with the final concerts in the cycle, Siegfried in June 2018.
As in the previous releases, this Rheingold is all about the orchestra, that much is clear from the packaging. On the back of the box is a quote from the London Times review, “the Hallé were the stars, responsive to every nuance of Elder’s direction.” Similarly, an orchestra list appears prominently in the otherwise skimpy booklet. There is a cast list there too, but it is the same font size as the orchestra players’ names (though bold), with no bios.
The good news is that the Hallé players more than justify their billing, and are indeed the stars. Everything about this performance speaks of meticulous preparation, and the orchestra is on top form throughout. Particularly satisfying are the low woodwind and brass, well represented in the atmospheric and broad soundstage elicited from Manchester’s Bridgewater Hall.
Elder’s tempos are slow, so slow that the recording stretches to three CDs. He seems to be going out of his way to give the orchestral players the space they need to create the textures and atmosphere, which they do, and admirably. And although this is a slow Rheingold, it is more about detail than grandeur, with Elder maintaining a sense of narrative, even in the concert hall. That said, it occasionally feels like he is focusing the drama in the orchestral interludes, some of which begin with an ungainly gear shift, as if Elder feels he is no longer burdened by the singers and can get back to his orchestra.
Fortunately, the singers never sound in need of further attention from the podium. The predominantly British cast makes for a good ensemble, and there are no weak links. Iain Paterson is lyrical but commanding as Wotan, offering an ideal balance of elegance and drama. Samuel Youn plays Alberich straight, with none of the dark comedy often associated with the role. The result is very musical, though arguably lacking in characterization. Nicky Spence is more theatrical as Mime, and more entertaining for it. Fasolt and Fafner, Reinhard Hagen and Clive Bayley, are suitably menacing, and easily distinguished for Hagen’s lighter, more lyrical tone against Bayley’s heft lower down. The female leads are harder to distinguish, apart from the sweet-toned Emma Bell in the criminally small role of Freia and Susanne Resnark as Erda, her appearance a great coup de théâtre, the sort of thing that Elder does well.
This is a solid Rheingold, and competitive with any of the recent concert versions: Janowski, Gergiev, Rattle, Zweden. Among those, I’d probably rank Elder second, after Rattle’s excellent version with the Bavarian Radio Symphony Orchestra. All are lacking theatrical impetus, a fact that Elder, like Jaap van Zweden with the Hong Kong Philharmonic, seems to emphasize through tempos. Elder is also similar to Gergiev in his emphatic treatment of the orchestral interludes, though Gergiev takes that even further, increasing the drama but risking the coherence. Early reports suggest that Elder’s Siegfried is in a similar vein, steady but dramatic, with a strong cast, again including Paterson as Wotan. The CD release is no doubt imminent, and much anticipated.