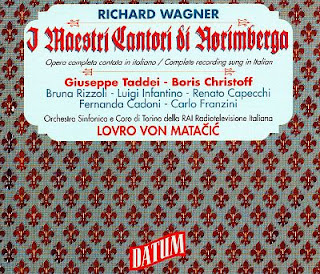 Lovro von Matačić was well regarded as a Wagner conductor in the decades after the war, but few of his many Wagner recordings have made it to CD. He worked closely with Wieland Wagner, and made several appearances at Bayreuth: A Bayreuth Lohengrin from 1959 is one of only two other Matačić Wagner recordings currently available (Orfeo 691063; there is also a 1957 Rienzi from Stuttgart, Archipel 555). The reason may be that Matačić was more active in regions without well-known Wagner performing traditions. My only previous encounter with his Wagner was a Lohengrin from the Teatro Colón in Buenos Aires from 1964. That one is a curiously macaronic affair: The leads sing in German while the chorus sings in Italian. It was released in 2010 on the Columa Música label (0229), presumably to capitalize on the impressive performances of Victoria de los Ángeles as Elsa and Christa Ludwig as Ortrud, but it’s no longer in print.
This Meistersinger has a similar story. It is a stereo studio recording, made in Turin in 1962, and, as well as Matačić himself, includes two starry names among the cast, though neither well-known for Wagner: Giuseppe Taddei as Hans Sachs and Boris Christoff as Pogner. The sound quality is good for the age, with wide stereo separation, and the soloists close-up—the chorus sounds more distant. The sound is certainly good enough to register the most unusual feature, that it is sung in Italian. Given the politics of opera in the vernacular, that alone places the recording in the “historical curiosity” today. I’m not wholly against the idea, though Italian is certainly a more problematic translation for Wagner’s texts than is English. There is a certain flowing elegance to the title I Maestri Cantori di Noimberga, and it is endearing to hear Eva (Bruna Rizzoli) continually referring to Walther (Luigi Infantino) as her “cavaliere.” But it is a shame that no one could think of a single-syllable translation of “Wahn,” which sounds clunky when rendered by Sachs as “Follia! Follia!”
The Italian character of this performance goes well beyond the language, with most of the cast, and the chorus too, performing in a style better-suited to Verdi or Puccini. There is lots of portamento, a generally free approach to rhythm, and lots of emphatic phrasing with big dynamic swells. Most Italianate of all is Infantino as Walther, a matinee heart-throb reading that takes some getting used to. But the presence of his voice, and elegance of his tone, right up to the top, make this an impressive and endearing performance. Similarly with Taddei’s Sachs. This is a dour reading, more stentorian than benevolent, but the tone is solid, and Taddei easily commands the sound stage. Christoff’s Pogner is more traditional—he would have been in his late 40s when this was recorded, so a younger Pogner than in most staged performances, but his voice is ideal, dark and authoritative, but not overly weighty or deep.
The best performance here comes from Bruna Rizzoli as Eva. Perhaps it is the role that allows her to escape sounding overly Italianate, but her performance could sit easily in any German-language recording, and stand out for quality rather than style. She is well served by the recording too, which captures a sweet, broad tone with plenty of support. She has a pronounced vibrato, wide and slow, but it is applied with such natural ease that it is difficult to complain.
A stern Beckmesser from Renato Capecchi highlights a potential problem with this recording, the lack of humor. Capecchi gives a dramatic reading—you feel his pain—but his set pieces, outside Eva’s window and his competition song, almost feel aggressive and lack the required lightness. But perhaps Matačić is as much to blame. Generally, his reading of the score is very fine, dynamic and elegant, and well co-ordinated with the singers. But it feels more symphonic than dramatic. For example, the Prelude to act III is done with great passion; it is emotive and reflective, and all beautifully proportioned. But you don’t get the switch in mood when David enters (Carlo Franzini, a solid performance, but he doesn’t sound young), it’s more a gentle transition. And the moment a few minutes later when David realizes he has forgotten Sachs’s names day again passes without the music registering the humor.
Matačić also has an annoying habit of pausing briefly just before climaxes, again more a symphonic than a dramatic trait, although in all other respects his interpretation is a fine one. The orchestral strings sometimes lack coherence, and the large choir can be ragged too. Even so, this is an entertaining and distinctive reading of Meistersinger, and makes for an enjoyable couple of hours. The last time this recording was released was on LPs in 1984 by Melodram, which was reviewed by William Youngren in Fanfare 7:3. He listed the inevitable cuts to the score, describing act III as emerging “as something of a patchwork quilt.” The fact that act III here times in at 113 minutes (at least 10 minutes shorter than the modern norm), despite Matačić’s steady tempos, gives an idea of the issue. A lot of Sachs’s music is cut, which may disappoint Taddei fans, but otherwise it doesn’t seem like a deal breaker, especially as nobody—outside of Italy at least—is likely to be seeking an Italian-language Meistersinger for their reference recording.