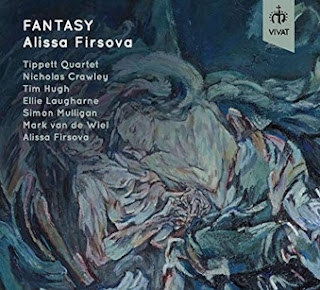 
This portrait disc of Alissa Firsova as composer follows a previous release, Russian Émigrés, on the same label, where she made her recording debut as a pianist. There is symmetry, in that Firsova and her family (her parents the composers Dmitri Smirnov and Elena Firsova, her brother the artist Philip Firsov) left Russia for the UK in 1991. Where Russian Émigrés looked back to the family’s Russian connections, this release is more focused on Britain, in particular through inspiration from English-language poetry. The whole concept offers a refreshing perspective on the UK, increasingly regarded as a hostile environment for immigrants, but here celebrated, in Firsova’s words, as “paradise on Earth.”
The program opens with Tennyson Fantasy, a string quartet written in 2016 in which each movement is inspired by a Tennyson poem. In live performance the poems are to be recited, but here they are wisely omitted, though the texts are included. Intriguingly, Firsova uses excerpts from the poems in lieu of performance directions, and despite the lack of any performed words, the music has an undeniably poetic quality. The lines are long and lyrical, and supported by open and abstract harmonies. It is difficult to pin down Firsova’s style. Harmonies are broadly consonant but only fleetingly tonal. There is a clear influence from French Impressionism, but the expression is more direct and focused—the harmonies are deliberately ambiguous, but never merely atmospheric. Those paradoxes are highlighted in the performance from the ever-adventurous Tippett Quartet, who commissioned the work. While the players afford the music its melodic and expressive breadth, they are also very definite in their articulation and phrasing. The recorded sound brings the players up close as well, increasing this sense of focus and definition.
Bride of the Wind for piano duet (one piano, four hands) was inspired by Kokoschka’s painting of the same name, which also appears on the cover. That, in turn, was inspired by the painter’s relationship with Alma Mahler, and represents the two of them as Tristan and Isolde. Firsova’s approach is again Impressionistic, but now more turbulent and psychological. Despite the four hands, and the plentiful sustain pedal, the textures are remarkably clear, even if the mood is decidedly murky. And again, the harmonies are more complex than they first seem: The textures are reminiscent of Ravel, or perhaps early Scriabin, but the harmonic structure is much more mobile and ethereal. Firsova and Simon Mulligan give a compelling account, particularly impressive for the clarity of detail in the ever changing sound fabric.
Three clarinet works follow, collectively entitled Expressions, two with piano accompaniment and one for clarinet quintet. The quintet, Loss, is the most substantial, and the most expressive. Again, Firsova’s ability to infuse melodic lines with a direct, lyrical impulse makes the clarinet writing particularly effective. Clarinetist Mark van de Wiel, principal of the Philharmonia, plays effectively and finds few challenges. The accompaniments are straightforward, indicative perhaps of these being earlier works.
Two songs make explicit the underlying poetic inspiration behind the album. Here in Canisy refers to the town in Normandy, also memorialized in Hommage to Canisy by Elena Firsova, while Unity takes a more philosophical approach to the “Paradise on Earth” theme, concluding that “the true paradise can be found in one’s own garden.” The texts are by Peter Wolrich and pose a real challenge for musical setting, composed as they are in free, apparently unstructured verse. But Firsova’s flexible and accommodating melodic lines just about meet the challenge, and her now resolutely tonal, though still imaginative, accompaniments offer solid support. Singers Ellie Laugharne and Nicholas Crawley give expressive readings, although the range goes too low for Crawley at times, and both would benefit from warmer recorded sound.
Firsova herself accompanies the songs, and is particularly evocative in the bell chimes of the first. She also accompanies on the last work of the disc, Fantasy for Cello and Piano, performed by Tim Hugh, principal of the London Symphony Orchestra. Though this is a substantial work, it has the feeling of a reflective epilogue to the program as a whole. It is beautifully performed, too, by Hugh and Firsova, both players giving the music its full measure of breadth and reflective, even nostalgic, expression.
The close-up sound, here and throughout the recording, denies the music some of the atmosphere and warmth that it could clearly benefit from. But otherwise, the production values here are top class. As ever, the Vivat label pulls out all the stops, with elegant packaging, detailed recording information, an informative essay from Firsova herself, and full texts (even the modern ones they have to pay rights for). Commercially and artistically, this is a brave venture for the label, their first substantial foray into contemporary music, and hopefully not their last.

This review appears in Fanfare magazine issue 41:2.
No comments: