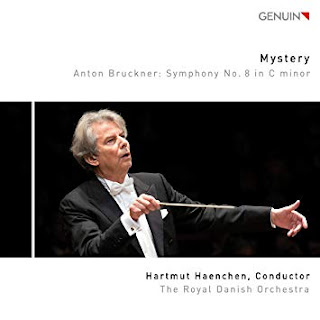 
Hartmut Haenchen writes in his liner note to this release that Bruckner’s attitude to tempo was based on a desire for clarity, emphasizing a vocal quality in the melodic lines, a result of his “Classicist” temperament. In practice, that means fast tempos throughout, and at less than 70 minutes, this is the fastest Bruckner Eighth on my shelf. Haenchen also cautions against “non-notated portamenti,” and duly avoids any such extravagances. Yet the written tempo markings and changes are generally acknowledged, and this is a significantly more fluid reading than many. Haenchen also takes great care with articulation, the accents often emphatic, but never arbitrary. The result is a distinctive take on the symphony, often lacking in grandeur and majesty, but generally coherent and always faithful to the text, at least as Haenchen reads it.
The Royal Danish Orchestra plays with precision and commitment, though the string sound lacks character and the lower brass lacks weight—a slick, professional sound but clearly outside of the Central European tradition. The opening of the first movement feels brisk, although, as Haenchen states, he is also careful to avoid clipped notes, so we get broad phrasing from the strings, even at this pace. The tempo transitions in the movement seem to be conceived with a mathematical precision: They always function perfectly, but there is little poetry in the process.
The Scherzo second movement is the most successful for Haenchen’s approach—fast again, but characterized more by the strong accents in the lower strings than by the tempo itself. The generally light textures here allow those accents to propel the music. Elsewhere, and especially in the outer movements, they tend to make the music sound merely deliberate, rather than imposing.
Clear textures and fast tempos also characterize the Adagio. Haenchen’s contention that the vocal quality of the melodic lines should determine the tempo is generally vindicated here, and although the movement is over in a brief 21:47, it rarely feels rushed. That said, the portamentos that, while not notated, can be considered integral to the performing tradition, are sorely missed. For instance, when Bruckner ends a long phrase with a quintuplet turn before the cadence, surely he doesn’t need to state that the music should broaden? But in the absence of any such indication, Haenchen ploughs on. Similarly with the Wagner tuba chorales, which are integrated into the fabric, rather than appearing as moments of transcendence. Haenchen does slow and broaden for the climax, but loses the flow in the process, leading to ragged phrasing in the coda.
The opening of the Finale is taken too fast for the orchestra (Haenchen this time ignoring the …nicht schnell) and it takes a while for the ensemble to settle down. Again, though, Haenchen makes a convincing case for the dramatic potential of up-tempo Bruckner, even if the relationships between his often surprising tempos are difficult to pin down.
The recording was made at the Royal Danish Opera House, and the orchestra is captured in clear, if slightly dry audio. Although it is not labeled as a live recording, some audience noise gives the game away. The notes don’t tell us that this is the Nowak edition either, although the short running time is a big clue. For reasons unexplained, the album carries the title Mystery, an ironic choice, given that mystery is the one essential Brucknerian quality that Haenchen’s interpretation lacks.