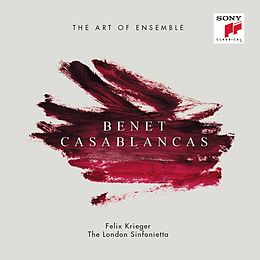 Benet Casablancas (b. 1956) is a distinctive voice in contemporary Spanish music. He studied in Barcelona and later in Vienna, where his teachers included Friedrich Cerha. The Central European Modernism of Cerha is a key ingredient of his style, yet he clearly speaks from outside of that culture. There is an openness and directness about Casablancas’s music that feels at odds with the post-war avant-garde, yet there is little sense of tension between the Modernist complexity and the clarity of texture and line that the composer clearly values. Casablancas has been active as a composer since the early 80s (he’s also a well-established scholar and teacher in his native Catalonia), and this release follows several others of chamber music on various labels, including a disc of string quartets with the Ardittis on Tritó and four discs from Naxos.
The present selection surveys recent works for ensemble dating from 2010 to 2014. This is highly caffeinated music: mostly fast and light in texture, and only occasionally letting up for quiet, reflective interludes, none of which last long. Casablancas finds inspiration in the visual arts—two works here are named after Picasso and Rothko paintings—yet retains a valuable abstraction, allowing his work to easily stand alone, without reference to its sources.
The disc opens with Dove of Peace a “Concierto de Cámera” for clarinet and small ensemble dedicated to Picasso. The clarinet proves an ideal vehicle for Casablancas’s light, frenetic lines, but it rarely dominates, as the composer pays equal attention to the ensemble, with each of the instruments used soloistically to construct filigree textures made up of their independent and always audible lines. The following Octeto is a shorter work, in which oboe and flute take over from the clarinet as the focus of the ensemble, achieving similar lightness and transparency throughout.
Four Darks in Red, after Rothko is more knotty music, with harder accents and a more defined rhythmic profile. But that clarity of texture remains, with the harp, for example, shining through, and muted, low-pitched interjections from the trombone creating an earthy sonority, redolent of Rothko’s color palette. Mokusei Gardens, A Viennese Notebook suggests from its title a reminiscence of Casablanca’s studies in the Austrian capital, but also a Japanese influence, as invoked by occasional pentatonic lines. This is the only multi-movement work on the disc, offering a more varied range of textures and moods.
…der graue Wald sich unter ihm schüttelte (The Gray Forest shook under Him) again suggests Vienna, not only in the language of the title, but also in the almost Mahlerian use of the horn, the sound here still modern but now with a distinctively Romantic hue. As with Dove of Peace, this too is described as a chamber concerto, this time with the horn as soloist. The choice of solo instrument brings a more lyrical turn to Casablancas’s writing, although the ensemble retains its light, rhythmically alert profile.
Finally, Dance, Song and Celebration, another ensemble work dominated by perky, active woodwind solos. The instrumental lines feel even more independent here, though their cumulative effect is of a continuously evolving and highly variegated texture.
The performances by the London Sinfonietta are as accomplished as the ensemble’s reputation would have us expect. The clarinet and horn soloists in the chamber concertos, Mark van de Wiel and Michael Thompson, find a natural affinity for the music, which is always idiomatically suited to their instruments. The recordings, made at George Martin’s AIR Studios in London, are close-up, sometimes feeling a little claustrophobic and airless (ironically), but always capturing the teeming detail of the music. Conductor Felix Krieger communicates a deep passion for this Casablancas’s work, both in his disciplined leadership and in his brief but informative liner note. The whole project represents a rare foray into the avant-garde by the Sony label, but given the approachability and directness of the music it documents, the disc should fit comfortably into their diverse catalog.