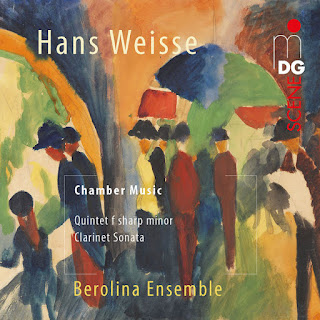 Hans Weisse (1892–1940) is MDG’s latest discovery from the apparently limitless number of Austro-German late Romantics who have fallen into obscurity. It turns out Weisse has another claim to fame—this one equally  unfulfilled—as a music theorist, as he was one of the key figures in developing the theories of Heinrich Schenker, and to bringing them to the U.S., were they flourished.
The accepted history of Schenkerian analysis has it that two of Schenker’s Vienna pupils, Oswald Jonas and Felix Salzer, left during the Anschluss and established themselves in American universities, bringing Schenker’s writings and elaborating them into the discipline we know today. But Hans Weisse fits in as the Mittelgrund level in this process. He too studied with Schenker, in Vienna from 1902 to 1919 (though interrupted by military service). After a successful academic career in Austria and Germany, he accepted a position at Mannes College in New York in 1931—and that is the true starting point of Schenkerian analysis in America. Jonas and Salzer had been pupils of Wiesse in Vienna, and when he left, initially for Berlin, both continued their studies with Schenker himself. So it was a tight-knit Schenkerian community that transferred across the Atlantic, with Weisse the stand-in patriarch, in the absence of the great man himself.

As well as analysis, Weisse also studied composition with Heinrich Schenker, yet the music of both men is now almost completely forgotten. The liner note for this release, by Detmar Huchting, makes some overblown claims for Weisse as a composer, an underrated genius in the order of Dittersdorf apparently, but also says that Weisse’s name appears in no reference works, not even Grove or MGG, the latter a particularly egregious omission. Huchting’s notes go on to outline Weisse’s career as a theorist, but don’t mention his music beyond the dates of these two works. Similarly, an article in the Journal of Musicology by David Carson Berry, “Hans Weisse and the Dawn of American Schenkerism” (Vol. 20, No. 1 Winter 2003), gives an excellent survey of Weisse’s contribution to Schenkerian analysis, but without mentioning his music at all. Of the two works presented here, the Clarinet Sonata has an opus number, 10, while the Clarinet Quintet does not, suggesting only the first was published. But that seems to be all the information available on these or any of his works.

The influence of Schenker is certainly felt in this music, especially in its faithful adherence to models from Brahms—a figure as apparent in the choice of genres as in the style of the music. Schenker’s traditionalist approach to tonality, and his elevation of counterpoint as a Germanic musical virtue, translates here into a flowing, lyrical style, with plenty of imagination in the thematic development, but all based on a rigorously diatonic tonal structure. Although it is probably pushing the point, it is tempting to hear this music as Schenkerian analysis made flesh, and you could certainly imagine slipping an Ursatz under this, and rationalizing the melodic lines as elaborated descending scales and the bass as decorated primary-key arpeggiation. Also, Weisse tends to use relatively short melodic motifs, but somehow manages to develop them into substantial works, the quintet alone is 43 minutes—so he was clearly a master of Auskomponierung (elaboration/composing out).

Of the two works, the Clarinet Sonata, written in 1921, is the more successful. The style is achingly close to Brahms, even to the point of inadvertent imitation. Its three movements are as well structured as we would expect from a music theorist, but the layout is unusual, the second movement an elaborate and diverse scherzo, the last movement slow, although suitably scaled to end the work. Broad arpeggios range across the piano in accompaniment to sprightly and unpredictable clarinet lines, the solo work always lyrical and rarely going to any extremes of dynamic or tessitura. Clarinetist Friederike Roth opts for a more Romantic than analytic approach, which is for the best, and we remain in a Brahmsian sound world throughout. Her tone sometimes narrows excessively in the upper register, and also goes course in the few loud sections—both surprising flaws given the apparently straightforward nature of the writing. Pianist Viller Valbonesi also finds a suitable atmosphere, subtly shaping his arpeggios with a slight and nuanced rubato.

The Clarinet Quintet dates from 1926, so both works predate Weisse’s move to the States. It starts in a declamatory mode, with a decisive falling motif from the strings, but soon settles in to an amenable contrapuntal style. The clarinet rarely dominates the Vordergrund, and often doesn’t play for long stretches. Even when she does, she is sometimes difficult to pick out, but it is difficult to decide if this is a flaw of the present ensemble or Weisse’s instrumental writing. A few moments of scrappy ensemble from the strings are highlighted by the clarity of the textures and the quality of the audio, but they don’t detract. The fact that the Clarinet Sonata does not have a slow movement proper is all the more sad for the quality of the slow third movement here. Weisse finally relaxes his contrapuntal rigor, and gets a little more adventurous with his harmonies, though there’s still nothing here to irk Brahms.

The recording sound is up the usual high standards of MDG. A vibrant bass response serves both the piano left hand the cello well. Surround sound brings atmosphere and warmth, but not at the expense of detail. A satisfying and intriguing release, presenting a new name amongst the Brahms imitators, and very possibly the Brahms-imitator-in-chief.