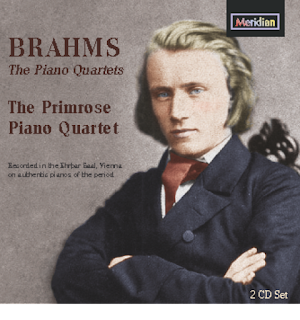 Period instrument recordings are often accused, or at least suspected, of academic rather than musical motivations. But the two need not be mutually exclusive, as this studiously academic but also vibrantly musical collection demonstrates. The three Brahms piano quartets are here presented in period performances—the first ever it seems for Nos. 2 and 3—using three different pianos of the era, and recorded in a venue familiar to Brahms himself, the Ehrbar Saal in Vienna. The recording grew out of a symposium at the Royal Birmingham Conservatoire on period performance practice. The Conservatoire also sponsored the release, and so, as expected, the documentation is impeccable, with detailed discussion on the works, the performance philosophy, and the pianos, by John Thwaites, who is the Quartet’s pianist, and Gerd Hecher.
The three pianos are an 1870 Streicher (Quartet No. 1), an 1853 Blüthner (No. 2), and an 1878 Ehrbar (No. 3). Of the three, only the Ehrbar is cross-strung, and it sounds the most modern. The Blüthner is the most wooly sounding, while the Streicher has a nimble action and clear tone that makes it the most attractive and distinctive, at least to my ear. But soft, round sounds are the order of the day, and the gut strings of the other three players—Susanne Stanzeleit, violin; Dorothea Vogel, viola; Andrew Fuller, cello—give an ensemble sound that is fully sympathetic to each piano in turn. The gut strings are particularly apparent in Brahms’s regular use of percussive pizzicato patterns, here given a warm bronzed quality, but without reducing the rhythmic drive.
The liner note discusses, as a potential source for performance practice, a recording of the Third Quartet made in 1927 by the Spencer Dyke Quartet for the National Geographic Society. It comes up early on in a discussion about editions: The Simrock leaves the sustain pedal down indefinitely after the opening piano octaves, while Hans Gál’s later Breitkopf and Härtel edition releases the pedal at bars 2 and 4, apparently in line with performance practice in Vienna at that time, 1926–7. In fact, this new recording follows Gál, where the Spencer Dyke goes along with Simrock. The moral seems to be, as John Thwaites writes, “… to generalise too much about the Performance Practice of Brahms’s day is to miss one of the most essential characteristics of that time – its plurality and variety.”
Another contentious issue is portamento, in which the Spencer Dyke Quartet are apparently indulgent. The First Piano Quartet appeared on a period performance recording in 2016, from the Australian ensemble Ironwood (ABC 481 4686). They take portamento to extremes, and the results are uncomfortably queezy, whatever the historical veracity. The Primrose Quartet apply portamento too, but it’s more reserved, as Thwaites writes, “... an unashamedly modern players’ perspective on the refined portamenti of Arnold Rosé, concertmaster of the Vienna Philharmonic from 1881 (and rumoured to be an earlier owner of Susanne Stanzeleit’s Guadagnini violin).” Piano arpeggiation—a subject of much discussion in 19th-century period practice—is rare on the NGS recording, as it is here. More interestingly, the parts occasionally move out of alignment in that early recording, a practice that the Primrose Quartet aims to follow. So we often hear a piano chord slightly before the sustained bloom of the string trio, but the effect is made more palatable by the generally mellow attack from each of the pianos.
The Ehrbar Saal gives a warm resonance to the sound, and perhaps more body to the pianos than they might otherwise achieve. In line with its scholarly credentials, the recording is made in what is described as “Natural Sound.” It isn’t clear exactly what that means—some sort of binaural approach perhaps?—but the result is a marked separation of the string trio in the stereo array, with the cello dominating the right speaker. The pianos are well recorded though, without any of the mechanics impinging on the sound.