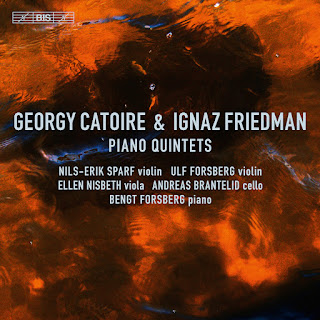 This disc presents two attractive but largely forgettable piano quintets of the late Romantic era. Neither composer is particularly famous—at least as a composer; Ignaz Friedman had a more compelling claim to fame—but their piano quintets seem to be considered their finest works. So this recording offers an intriguing taster of their respective soundworlds. And, despite hailing from different countries, Catoire from Russia, Friedman from Poland, their styles are remarkably similar, making for a logical and complementary pairing.

Georgy Catoire (1861–1926) was as Russian composer (of French descent, hence the name) working in the same milieu as Taneyev, Glière and the young Rachmaninoff. But Catoire was largely self-taught, and isolated himself from cosmopolitan musical life, at least until 1915, when he was appointed Professor of Composition at the Moscow Conservatoire. As with many composers working in Moscow in the years immediately before the Revolution, Catoire sounds a lot like Rachmaninoff, but without the memorable tunes. So in the Piano Quintet, we hear deeply sighing melodies in the strings, with just a touch of folk flavor, supported by rippling waves of arpeggiated accompaniment in the piano. Catoire’s development techniques are more distinctive than his melodies, and the opening of the first movement bears a striking resemblance to the Tchaikovsky Piano Trio. But he soon goes his own way, with densely contrapuntal and harmonically complex elaboration, reminiscent of Taneyev but less focused and directed. The results feel structurally loose, as if the form of each movement is an afterthought, an impression supported by the casual and relaxed ending to each of the three movements.

If Catoire begins with Rachmaninoff, Friedman begins with Brahms, his quintet opening with a three-note motif taken from the Scherzo of Brahms’s Third Piano Quartet, with which it shares the key of C Minor. Catoire’s rambling movements seem positively concise compared to Friedman’s—whose quintet, also in three movements, is almost half as long again. Friedman is more dour than Catoire, more serious and intense. The Larghetto second movement offers some relief, with delicate and varied melodic textures from the string quartet supported by more modest textures in the piano. The last movement is titled Epilogue, but it is just as knotty and involved as the first. Given Friedman’s itinerant career as a concert pianist, it is little surprise that the stylistic profile of his music is complex and variegated. The Piano Quintet dates from 1918 (three years after Catoire’s), soon after Friedman’s studies in Leipzig with Hugo Riemann and Berlin with Busoni. Certainly, the approach to development and counterpoint feels Germanic, even if the rhapsodic form suggests a distance from those traditions. Of the two, the Catoire comes across as the more accomplished work: Neither is a lost masterpiece, but both are distinctive enough to be worth hearing.

These recordings were made at the Allhelgonakyrkan, a church in Stockholm that also hosts a chamber music festival, led by Bengt Forsberg, the pianist here. He seems to be the motivating force behind the project, although the most famous name amongst the players is cellist Andreas Brantelid. All of the players are up to the demands of this music, although the extended climax of the Friedman first movement taxes the violin intonation in the upper register. The recording quality is up to BIS’s usually high standards. Both works, and the Friedman in particular, pose challenges of balance, and the engineers seem to have recessed the piano to prevent its huge textures from the dominating the ensemble. The strings, by contrast, are very close, and we hear the players breathing in silences, and some extraneous bow noise, though none of it a distraction to this adventurous and frequently beguiling program.