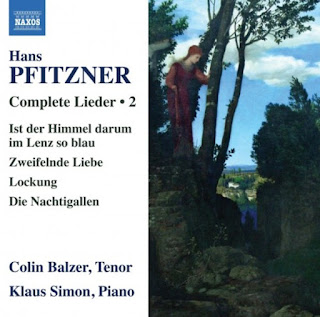 We don’t usually think of Pfitzner as a Lieder composer, but he was prolific in the form, writing 115 songs, spanning his career. This disc is Volume 2 in a new complete cycle from Naxos, which should eventually run to five volumes in total. Colin Blazer sings the Lieder for tenor voice, covering the period 1888–1916, so early-to-mid career, and Naxos are wise to present most of the program in chronological order, as we hear a clear evolution from a generic Brahmsian approach early on to a more distinctive sound around the time of Palestrina, an opera that several of these songs anticipate.

Pfitzner’s texts are mostly from German poets of the late Romantic era who have otherwise fallen into obscurity—August Schnezler, Robert Reinick, James Grun—although Eichendorff, Heine, and Goethe also make appearances. And, in contrast to the colorful tone painting and evocative scene setting of his operas, the approach here is more text-focused, especially in the early songs, generously melodic but always placing the texts above the musical invention. But more sophisticated harmonic progressions and accompanying effects begin to creep in in the first years of the 20th century, with the Eichendorff setting “Die Nachtigallen” (1907) a particularly distinctive and piquant number.

Tenor Colin Blazer is more associated with the Baroque repertoire than the late Romantic, but he has a fine voice that suits this music. His tone is light but impressively agile. Pfitzner occasionally makes Wagnerian demands, especially with loud and high phrase endings, and Blazer sometimes struggles, although he is able to add a carefully controlled vibrato to stabilize these passages. His German diction is good, with satisfyingly rolled “r”s, although “ch” sounds could be softer. Pianist Klaus Simon doesn’t overplay the generally conservative accompaniments, and balances between singer and accompanist are good.  The piano itself could do with more tonal focus, especially in the mid-range, and the reverberant but boxy acoustic of the Steinhalle in Emmendingen does it no favors.

This release, and indeed this entire cycle, is up against a five-volume set of the complete Pfitzner Lieder released on CPO in the late 1990s. The tenor for those recordings was Christopher Prégardien, who has a fuller and lower voice than Blazer, though he is more strident and commanding in those high-lying phrase endings. When that cycle was complete, CPO boxed them up as the five-CD set 999-789-2. That is still in print, and available at mid-price, so the chances are that Naxos will eventually come up with a comparable and similarly priced offering. CPO look to maintain the lead here, but given the differences in approach between the recordings of the tenor songs, it might well end up that both are worth having.