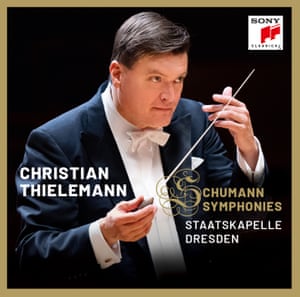 Fans of Christian Thielemann will know what to expect from this Schumann symphony cycle—big orchestral textures, steady but fluid tempos, and a general feeling of old-school values from a conductor who has never worried about keeping up with the latest trends.
This is Thielemann’s second traversal of the Schumann symphonies. His first was with the Philharmonia and released on DG in the late 90s and early 2000s. His conception of these works hasn’t changed in the intervening years, but his interpretations have matured. The sense of line that characterizes his best work is now much more in evidence, and while both cycles tend towards slower tempos, Thielemann is now able to maintain a sense of coherency, especially across Schumann’s often protracted transitions, that was conspicuously lacking with the Philharmonia. He is also able to subtly weigh accents—through a combination of minute delay and emphatic attack—to better punctuate the flow and vary the texture.
But is that enough? For the most part, yes, these are readings that generally add up, so long as you are amenable to Thielemann’s expanse and unapologetically Romantic approach. The combination of heavy accents and slow tempos works best in movements with long, flowing melodies over busy accompaniments, like the second movement of the First Symphony or the first movement of the Third. Slower movements are more variable, and Thielemann doesn’t always achieve the quiet and mysterious effect that Schumann is looking for: It works in the opening of the Second Symphony, where we get a real sense of atmosphere, but not in the introduction to the Fourth Symphony finale, which is too slow and falls flat. Similarly, the scherzos often lack punch, the music too slow and with not enough accenting: The scherzos of the First and Fourth Symphonies just feel too relaxed all round.
Elsewhere, however, the Fourth Symphony gives the most satisfaction. Thielemann finds the sweet spot between rhythm and flow in the first movement main theme, and the sense of drive here is exhilarating. So, too, the finale, the Langsam opening lugubrious, but the main theme, when it arrives, immediately rising the music-making to another level.
The recordings were made at Suntory Hall in Tokyo in 2018, and may be live: Pictures in the liner show Thielemann in the orchestra performing to an audience, but no mention is made of these being live performances. If they are, that may explain some slight ensemble issues. The First Symphony finale gets off to a shaky start, for example. The players soon find their feet, but another take would certainly have been preferable. On the other hand, there is often a relaxed feel about these readings that suggests a sense of easy communication between players and audience. So, for example, in the second movement of the Third Symphony, the exchanges between the strings and woodwind find the two groups slightly askew, but it is not a huge problem, or even a fault as such, so much as a daringly casual approach to ensemble.
The sound quality is good but not great, the orchestra well balanced but lacking immediacy. The second violins sit to the right, well separated in the stereo array, and all the clearer for it. The timpani sound is a bit dull, especially compared to the incisive playing from the Philharmonia’s timpanist in Thielemann’s previous cycle. If you are already a fan of Thielemann, then you will probably find much to enjoy here. If you are not, then his many recordings of Bruckner or Beethoven may a better place to start, or better yet his Wagner or Strauss.